GR20 or Five go Mad on Corsica. Part One. 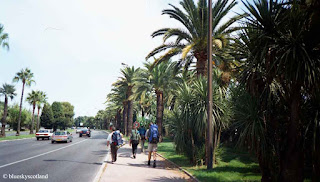 ALL PHOTOS CLICK FULL SCREEN.
I was going to put a post up on a local Clydebank walk during the lock down but I'd ran out of room on my computer drives to store it and while searching through old folders to delete some I found these again. A backpacking trip to Corsica from 2001. I also realized most of my best, most adventurous, photos/trips are in the past and that everything I've done, when I die, will probably be tossed in a skip somewhere and forgotten, so better to get it out again before that happens. Five of us in our old mountaineering club went to Corsica to do the famous GR20 in 2001. This is the walk from Nice Airport to the seafront and our overnight hotel. A grassy path runs parallel to this busy road under the palm trees and is a joy to explore so I picked that route instead. Only 20 feet away from here under the trees to the right but what a difference it makes. Full of insects, birdsong, and furtive wildlife instead of traffic noise and fumes. 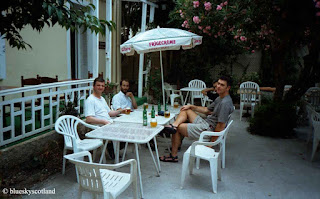 The hotel, booked and arranged by Julian, was great and reasonably priced. Present are Julian, Gavin, Scott and Shime. 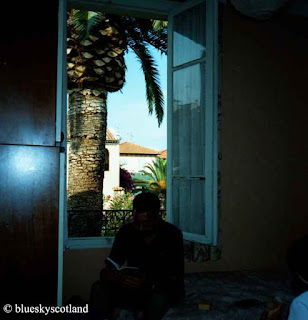 Inside the rooms. Shime reading the guidebook. 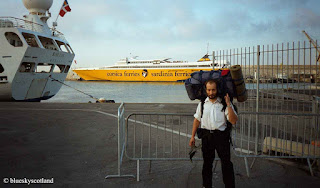 I really enjoyed the French Riviera with it's beaches, palm trees, super yachts, super babes, and millionaires but it would be expensive to stay there.... so we swapped elegance, extravagant lifestyles, and tempting potential decadence, for ten days of punishment, flies, dust, scampering lizards, and heat. Gavin carrying two backpacks here.... just for fun.  Around 44 kilograms or seven stone on his back, combined weight. My backpack for the trip weighed in at just under 4 stone or 25 kilograms, although this went down to twenty once you subtracted food and water carried. Yellow Corsican ferry boats in background. 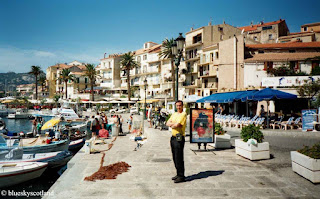 Around seven hours later we had crossed the Med and landed here at Ajaccio, the island ferry port in Corsica and birthplace of one Napoleon Bonaparte. We knew it was going to be a warm trip  as it was mid August, the hottest month in this region, and prickly pears on the dock yard cliffs greeted our arrival along with other desert plants. 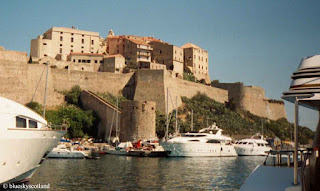 The Citadel in Ajaccio, still off-limits to the public in 2001 and in use by the French Military as Corsica for centuries has waged an on- off  guerilla war for independence, similar to the Basque separatist movement in Northern Spain. Several car bombs did go off around our time visiting both countries but we never encountered anything untoward ourselves. 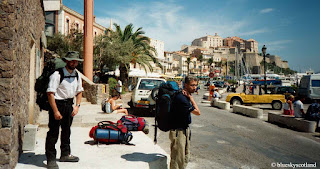 Waiting for a taxi in Ajaccio to take us round to Calenzana, near Calvi, and the start of the GR20. 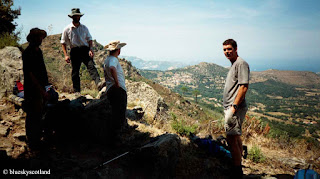 The team assembled. We set off in what felt like 30 degree heat across a semi arid landscape similar to inland Spain where the spaghetti westerns were filmed. Bone dry and dusty. This first leg was all uphill- 12 kilometers in distance- 1,550 metres or 5,086 feet in height, carrying the equivalent of a large dalmatian dog on our backs to reach the first hut. We set off around one pm in the afternoon but the back markers never reached the hut, sleeping out on a mountain ledge instead when it got too dark to go any further. We rejoined each other in the morning at the hut for breakfast. 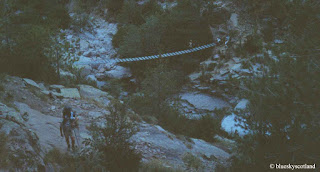 We would have wasted an entire precious day's hike staying overnight in Calenzana before setting out but we soon realized walking in 30 degree heat in midday temperatures was a real passion killer so all the rest of the trip we departed at first light as soon as we could see something of the trail ahead. 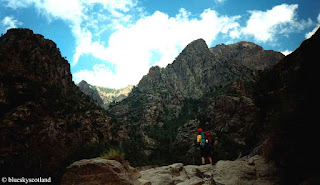 It was wild country we were going through. Corsica resembles both Arran and the Skye ridge in Scotland... but on steroids- 7000 to 8000 foot mountains instead of 3000 foot and a lot more of them. The above photo gives you some idea of the terrain ahead. 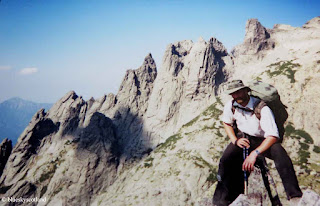 It was stunning territory to walk through. A bigger version of Pinnacle Ridge on Skye here as a  backdrop. Imagine backpacking the full Skye ridge traverse, end to end,  triple it, and you get some idea of this section of the GR20, reputedly the hardest of all the GR routes. Fantastic but tough on the body. 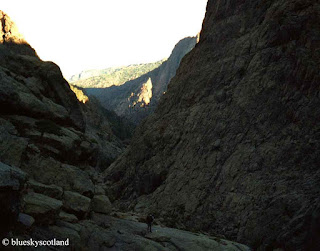 Traversing a steep gully with 1000 foot cliffs looming on either side. 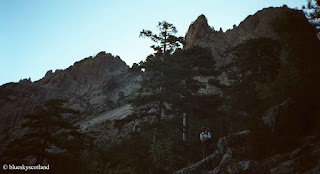 You can see how the Corsican rebel groups would be hard to catch in this landscape. 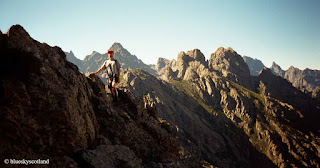 A typical day on the GR20- walking the ridge-line of peaks across this fabulous island. 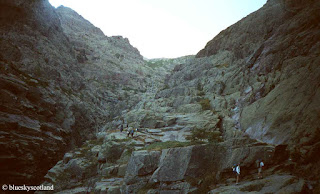 A deep gorge ascent in the mountains of Corsica. Best climbed in the shade of early dawn before the cruel sun arrived to oven chip us into eventual delirium. 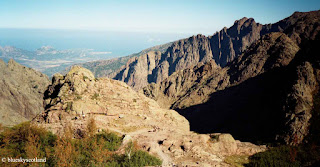 Like nowhere else backpacking I've been the sun was our enemy here so we walked from around 6:00- 7:00am until 1:00 or 2:00pm. Several backpackers came down with heatstroke during our trip, even if they came from hotter countries like France, Italy or Portugal but luckily we stayed safe using this method. Certainly the hottest  place I've ever backpacked through combined with the sheer ruggedness and complexity of the terrain. 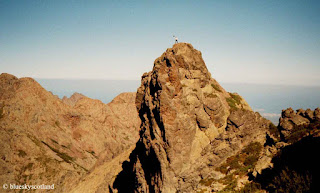 Gavin waving his hat on a rock spire. 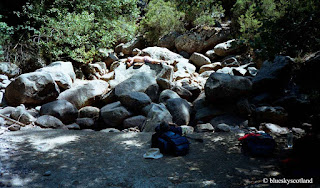 Rest and water stop at a shady mountain stream. Mid-day siesta. After 11:00am the only thing moving in the mountains seemed to be flies, lizards and dust. Anything sensible stayed in the shade.

Sunset over the peaks. To be continued. See... at one time I did do more than city walks in local parks.

Fabulous Bob, Corsica's a place I've often thought about - looks like a proper adventure! Looking forward to the continuation :o)

Absolutely stunning. I do quite well in fierce heat so long as it isn't humid - but it probably is there. I always did well in the deserts of Jordan and up their hills - a bit slower but no problems. I don't find dry heat uncomfortable at all...

I remember flying over Corsica on my way somewhere once (could have been one of my Jordan trips) and seeing wall-to-wall mountains. I've wanted to go there ever since but haven't managed it yet. Not sure I'd cope with the GR20 though - I think it might be too scary for me, although I should be a bit better since I started climbing...

Cheers Ian,
It's a fantastic island and I'm sure you would enjoy the GR20. I did it at 45 years of age and found it tough but thrilling. Be easier with a lighter pack and lightweight gear which you can get now or you can probably book huts now in advance by smartphone. I've always preferred camping out though if possible as mountain huts can be crowded, warm, and noisy.

Hi Carol,
it's a dry heat. What makes it hard is trying to scramble and negotiate the landscape with a large heavy suitcase strapped to your back in that heat as we carried 3 litres of water, three days food, and tents all the way. Staying in the huts would be an extra 13 euros per night plus 15 euros for a nightly meal in 2020. Camping was free so we always camped. We did go to the huts at night though for a beer and meeting folk.

Wow! Corsica is somewhere I have never been and would like to, although I wouldn’t attempt anything like this.

I'm pretty sure I'd be hutting the route! I hate carrying anything much and am no good at it!

Hi Anabel,
Corsica is a popular island for French and Italian tourists but I'd go earlier than August due to the heat and forest fires then. Maybe spring with some snow still on the peaks would be better. Still warm but not 90 degree heat. Although I enjoyed the GR20 I'm always conflicted on trips as I like exploring the cities and towns as well and we
saw very little of coastal Corsica or the French Riviera. I was very impressed by Nice and the surrounding area and would liked to have spent a few days and nights there along the coastal strip but as always time was pressing and my companions were mountain fixated and went through urban areas like lightening bolts. I had to be content watching the AB- Fab movie which was filmed all around Nice and the Med.

Hi Carol,
You would have to as I did it in my mid 40s and it was the toughest backpacking trip I've ever done. I would never dream of attempting it now. Too old and beat up- knees would never take the punishment of 4000 foot up and down days.

Fabulous! I've been to Corsica a couple of times for family trips, slumming it in villas with pools! It's such a stunning island, rocky peaks, gorgeous beaches, river swimming, interesting towns and all without much in the way of commercialisation. Climbed one mountain in cirque that overlooks Calenzana (don't remember the name but it was up around 2000m and very wild) and the Capo D'Orto which overlooks the west coast between Calvi and Ajaccio. The GR20 is still an ambition, likely never to be fulfilled. Waiting for the next post to appear now, you've rekindled some great memories