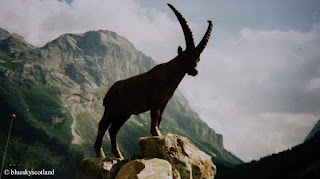 ALL PHOTOS CLICK FULL SCREEN
Another trip from way back 30 years ago. Not a backpacking tour this time but mountains climbed from a static base in Pralognan, a small alpine town with a campsite in the French Alps. You can do a five day hiking trip through the Vanoise region, which has spectacular scenery and  large impressive mountains but on this occasion we decided not to do that. The park was created in part to protect and save the Alpine Ibex, seen here in this statue- an impressive mountain goat as large as an antelope with huge curved horns. Luckily, they seem well used to people and have a calm demeanor as they are powerful animals and could do you a lot of damage if they wished. 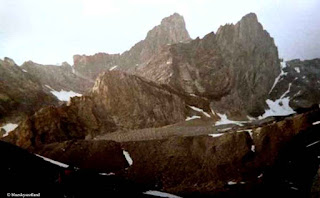 Pralognan sits in a deep valley surrounded by peaks that resemble shark's fins. Like these two here- Grande Gliere, 3392 metres, and Petite Gliere, 3322metres... or around 11,500 feet.  Which looked promising.... 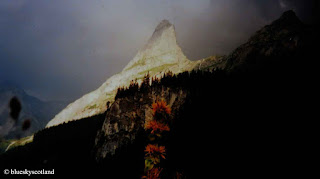 And this one, photographed during a summer thunder and lightening storm.. which looked scary. It was such a thin, fragile looking arete you could almost see though it in the right light. No one in our group suggested climbing it. Once again this was a July fair trip but this time we got two full weeks of unsettled weather, A lot of daily rain, some big thunderstorms- hot sultry days then colder almost Scottish weather with cloud and drizzle that turned freezing at height. 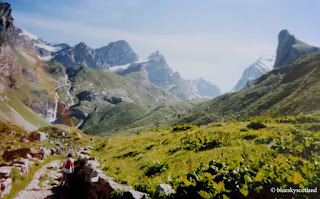 For this reason we did not do much at high levels. We did a fair amount of day walks into neighbouring valleys, mostly low level, then explored some balcony trails- waiting for the weather to improve. I didn't mind doing low level walks as it was still rural France, a new beautiful area to explore, and the alpine flower meadows and butterflies were incredible. On one of the few days we did get good settled conditions we managed to climb the Aiguille de la Vanoise, a 2796 metre, 9,100 foot shark's fin ( in English 'The needle of the Vanoise'). This is it on the right. 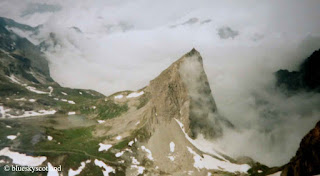 Another view of 'the needle' from the 11,000 foot Vanoise Snowfield, a vast icy dome of permanent snow and the 2nd largest example of this type of feature in the entire alps. We did manage a wander across this vast snow dome but it turned windy and cold halfway across it with mist and drizzle increasing- like a very bad Scottish mountain day in mid-winter so we turned back before frostbite set in. This is a 'Thank God' photo... our first clear view coming out the mist off the snowfield and realizing we were safe again and could relax. 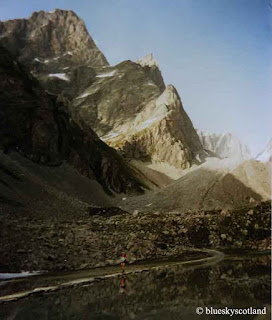 Walking across the reflective shallow lake in the pass above Pralognan. 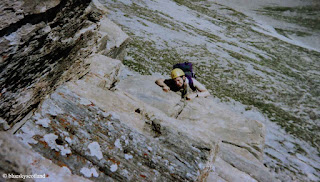 A Diff rock climb up slabs saw us attain the knife edged arete halfway up the shark's fin of the Aiguille de la Vanoise. 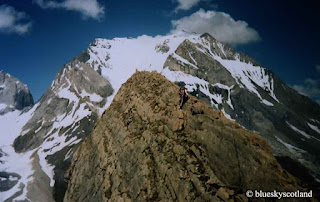 A summit view. With a sheer drop of over 1000 feet on both sides of this mountain the only way to protect this traverse was to loop the rope around any prominent rock blades on the ridge. Climbing in teams of two, in the event of a fall or slip, the second climber should jump off the other side if his partner fell, thus theoretically acting as a counterbalance and brake. Luckily, that was not put to the test.... as I was not very keen to jump into space off this mountain. I'd already decided I'd rather be dragged down the easy Diff side than step off a massive overhang on the opposite side. The 3855 metre, 12,900 foot Grande Casse in the background. 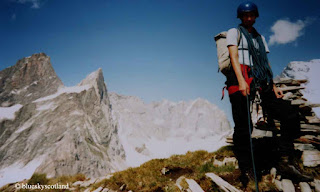 The sofa sized summit of the Aiguille de la Vanoise. Room to swing a marmot.... just about. 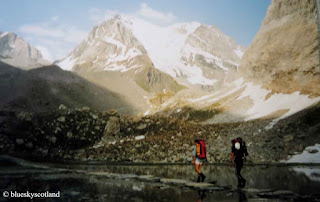 A couple of days later we had a go at Grande Casse. Being alpine novices we left our ascent too late in the day as it should have been a pre dawn start but we were still learning. With a five to six thousand foot ascent ideally we should have left in the dark but hindsight is a wonderful thing. 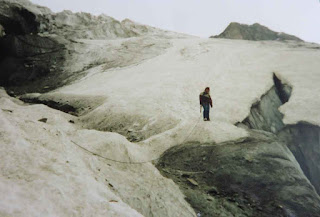 By the time we reached the glacier running up the central couloir of Grande Casse we had a thin layer of soft melted snow, warmed by the sun, sitting on top of hard ice beneath. Our crampons did not bite into the soft snow much yet did not find the lower belt of hard glacier ice either which made upward progress harder than it should have been. 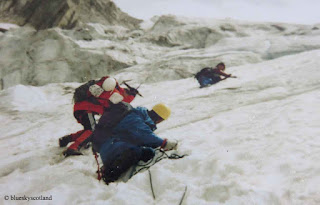 This photo sums that up. An alpine beginners mistake. Scottish climbers not used to hot early morning sun and summer starts in darkness to beat the glaciers melting by lunchtime. Stonefall was also an issue here with ice and rocks occasionally bouncing past us as we ascended. 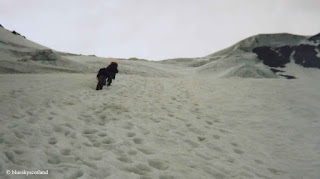 We had a decent go at it but lack of alpine experience at that time, coupled with poor weather coming in again meant we turned back before the final summit ridge. I'd seen photos of this snow arete in the guide book we had and did not fancy traversing such exposed and steep upper slopes in bad weather so we turned back. 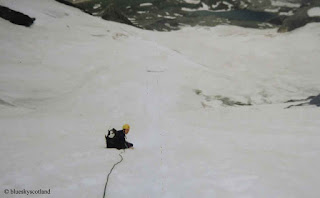 A wise move as visibility decreased under darkening skies and colder temperatures. You really need experience under your belt in bad weather conditions to take on the snow covered alpine peaks and at that time we didn't have much.... or any idea of what the landscape was like above us. A lucky escape. 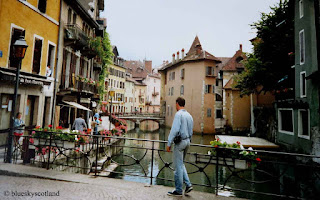 John in the beautiful French town of Annecy. Plane to Geneva, local bus to Annecy where we stayed one night then on to Pralognon the next morning. Annecy with its river and canals resembled a mini Venice and a cracking place to visit. The nearby Lac d' Annecy has tourist boats, surrounding mountains, and a vivid glacial colour tint. Much more spectacular than the Lac at Geneva, even with its high water fountain at one end. 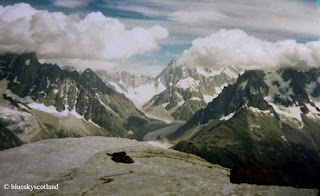 The weather in the Vanoise had been fairly unsettled but four of us still had one week of our trip left.
We decided to take a train a couple of hours east and north to Mont Blanc, at 4,808, 15,775 feet, the highest mountain in western Europe. A view of the Mont Blanc Range here and the Mer de Glace glacier with its distinctive banding. Would the weather improve and would we be able to climb it? 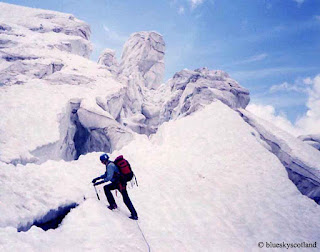 Would our luck hold out? Around 100 folk a year die on the Mont Blanc range even today. ....It's frequently labelled one of the world's most dangerous mountains due to the range of hazards and the sheer numbers climbing it... many not fully experienced or expecting the potential conditions possible on a high exposed summit.  Would we succeed?            To be continued.

I think we've all been there. Off to the Alps armed only with a guidebook and some experience of mountains in the UK.For me it was Chamonix and and a trip to the top of the Aiguille du Midi Cable car and an ascent of Mont Blanc du Tacul. My first Alpine 4000m peak and still my highest summit. All done on a shoestring, living off bread, cheese and boil in the bag sausages, too tight to pay for hot showers on the campsite. Different times.

My sons were quite young when we first came across a marmot during an alpine holiday, and the youngest was desperate to catch one and bring it back home.
Is that Ibex real, it looks almost like a statue.

Not sure I'd be up to much snow and ice alpine stuff - I'm not really that good at Scottish Winter Mountaineering unless it's somewhere like the Cairngorms...

How did you find the French? I've only been to the South of France (Camargue) but found them very snobby and unhelpful. And that was despite me trying to use my school girl French instead of speaking to them in English!

Hi Andy,
you get scant info with most alpine guidebooks either, especially at that time. Aig de la Vaniose 'a useful training climb- continue off ridge without incident'- is all it said. I've since seen the 'continue without incident' part on a you tube video recently with roped climbers hand traversing along a skyscraper tall knife edge of rock, thin as a gymnast's balance beam, with huge 1000 foot vertical exposure either side. Not 'continue without incident' to my mind so we just reversed the easy rock climb to the arete.

Hi Rosemary,
Marmots are cute. The Ibex statue marks the entrance to the park if I remember correctly. Real Ibex photos later.

Hi Carol,
The French can seem rather reserved, a bit like posh Home Counties English families I've encountered in the past. The stiff upper lip brigade memorably portrayed in Goodbye Christopher Robin. France has always leaned towards an intellectual, middle class superiority as a national identity though. French films often debate what the character feels, the philosophy behind things/emotions, and can be very wordy. The Italians are more like the Scots. Direct. If they like you they'll tell you- same as if they don't. More straightforward and open with their emotions. Well, that's my limited experience but TV chef Rick Stein said much the same thing recently and he should know. I was getting quite good at French with numerous two week trips there over the years but forgot most of it now.