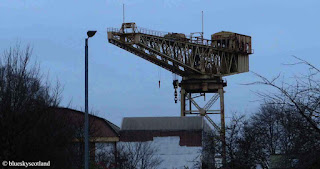 This is part of a night walk I did with Anne in the winter months 2019-2020 before  Covid 19 restrictions arrived that I never got around to posting until now. We had tickets to see something at the Oran Mor, a venue at the top of Byres Road next to the Botanic Gardens, but as Anne had not explored the University of Glasgow grounds at night and an event called Elfingrove was on at the nearby Kelvingrove Art Gallery and Museum we decided to go there first. We got off the bus at the Barclay Curle Crane at Scotstoun. Only a dozen or so of these massive cantilever cranes still exist around the world, most capable of lifting well over 100 tons ( the weight of an early 1900s steam locomotive say, built in Springburn then exported around the planet via the River Clyde) which might explain why the Clyde has four of the last survivors. One at Finnieston, this one at Scotstoun, The Titan at Clydebank and another Titan at Greenock Docks. 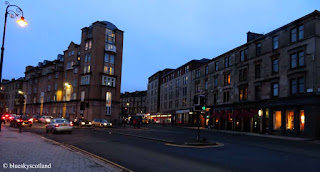 We then walked up to Argyle Street just as it was getting dark. The Kevingrove Art Gallery and Museum plus the University of Glasgow, on its hill, is just to the left of this photo. 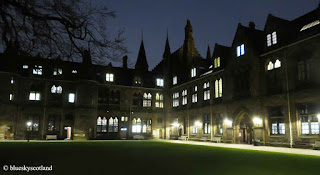 By the time we walked up to the University of Glasgow it was fully dark. Inside the courtyard square. 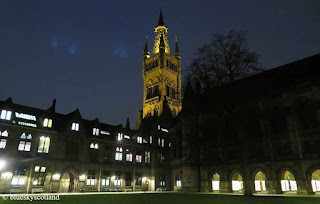 A view of the University Tower, the extra lights in the sky are coming from the Elfingrove display. 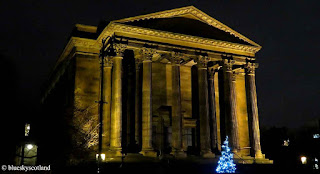 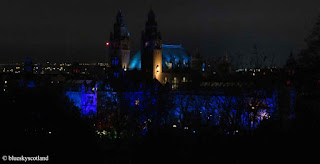 The towers of Kelvingrove seen from the University of Glasgow flagpole viewpoint. 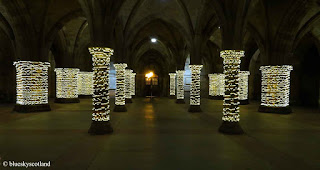 The Cloisters area at Christmas, situated under the University of Glasgow tower. 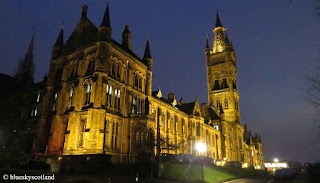 Front view of the University of Glasgow. Founded in 1451 so the 4th oldest university in the English speaking world apparently. Originally situated in the city centre this current building on its West End hilltop was constructed in the 1870s. It dominates the Glasgow skyline seen from the west and south side.

A day time view of it from the woodlands of Nitshill (nuts-hill) showing the tower (right) and the grey modern section (left) containing the University's Gallery of Modern Art and the University Library. The Campsie Fells behind. The white flagpole in the middle is probably the summit of Ruchill Park. 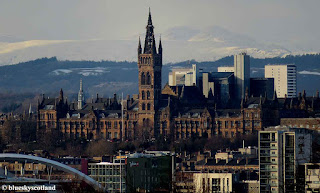 One showing how close the mountains are to the university. 30 minutes drive away. Naturally, it has its own mountaineering club. 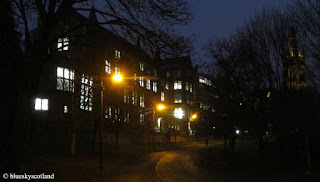 And so the darkness... back within the university grounds. 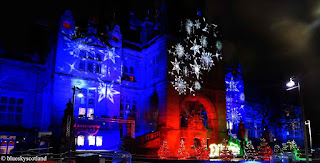 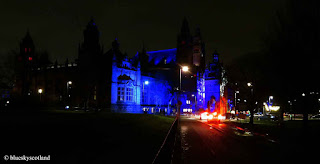 A distance view. Kelvingrove Art Gallery and Museum. The interior was open at night for a ticketed walk through but it seemed to be mainly geared for children after the popularity of  the 'night at the museum' films so we didn't go in having other, more adult, events on offer. We did like the light-show though and it was free to view. 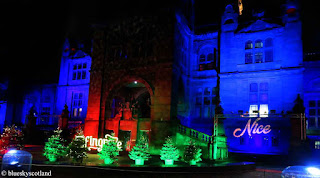 The back entrance. More of a Disney vibe rather than the edgy darkness of True Blood so we gave it a miss, surrounded by eager little breadsnappers as we were. It did get mixed reviews over the interior set up. 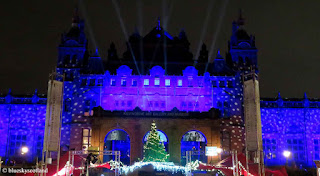 The lighting displays of the exterior though could not be faulted. Very spectacular. Linda McCartney's photographic exhibition still on as you can see. That ended in January 2020. 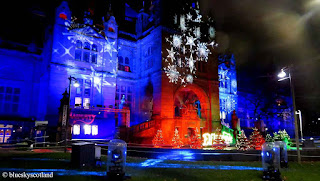 Snowflake Display.  Then on to the Oran Mor.... 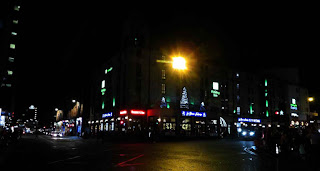 Then Glasgow City Centre.... A great night out.

Normally not my taste in music but this is brilliant and clever. For Anne. Amazing what you can create with a few sugar cubes.

Ah, my stamping ground! All very familiar but no less beautiful for that.

Ah, but the video may not be familiar. Very unusual. I only pick the best.

Had no idea your university was so old and historic!

Hi Carol,
yup. In the English speaking world it's 1- Oxford, 2-Cambridge, 3-St Andrews, 4-Glasgow. Glasgow was also the 4th city in Europe to reach 1 million residents, Also a model for North American cities with its early grid plan layout of the new town, the Second City of the British Empire (although two large English cities also have that claim, although not until later time-wise) At that time Scotland and its citizens built many of the world's ships, Steam Locomotives,and bridges (including Tower Bridge in London) Still has the largest terra cotta fountain in the world and the tallest multiplex cinema (at the time of construction.)

I know that area around the University so well, or did, but I don't expect it has changed all that much. My husband did his PhD at Glasgow many, many, years ago.

Yes, One part of Glasgow that's hardly altered. As familiar to a student from the 1880s as a 1960s Glasgow visitor. A kind of immortality usually reserved to ancient monuments as it might last another 200 years with an interior facelift.

I really need to head out more at night to explore towns and cities and practice my photography. They are different places at night


Hi Andy,
I mainly go out at night to get a colour fix after a run of grey dreary winter days. Often it rains all day here then dries up at night. I've learned to be a very fast point and shoot night photographer though as when I'm with someone on a walk it would really irritate them if...... A... I was not paying proper attention to them.... and B....if I was stopping and starting all the time... except on a bike ride when I'm ahead on a hill as then it counts as waiting for them to catch up so that's OK. Night settings or a long exposure would really try their patience, so that's out unless I'm alone.