My Birds of Paradise.

A spring flower display, above. I've never had the time, money or inclination to see the real Birds of Paradise in New Guinea so I'm more than happy to view them via the TV screen, without the real life adventure of deep jungle, creepy crawlies, biting flies, native guides, or the uncertainty of catching a glimpse of them at all. I'll leave that to the most dedicated birders and the professionals but I have found over the decades that taking a basic interest in the wildlife, the insects, the flowers, plants, trees, mosses and fungi encountered outdoors only adds to any walk. It also occurred to me that our own UK bird population can be just as colourful as any exotic species so here's a selection. 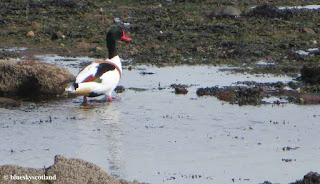 A Shelduck. The largest of the UK ducks and a colourful one. Found around the British coastal margins. 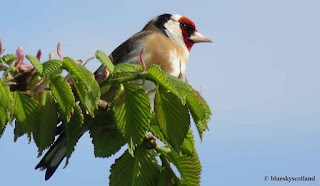 A goldfinch. The bright splash of gold on the wings is hidden here by the greenery. My father, as a boy, had a caged one, which was fairly common then, along with linnets and yellowhammers- similar to budgies during my own childhood, when many families had one stuck in a cage in the corner of a room. In fact when I saw budgies flying wild in Australia in large groups for the first time as a twenty something walker over there I was so conditioned to seeing them indoors and alone, static in a cage, it came as something of a shock to appreciate this was how they should be in the wild and how unnatural they must feel, closed in and single. Up until that point I hadn't properly realized how cruel captivity might be for this particular species as they appeared lightning fast in flight outdoors, capable of flying large distances across any semi desert region, and never alone, constantly chattering to their numerous companions. You wouldn't dream of keeping a swift or swallow in a small cage yet growing up with budgies all around me, in various friend's living rooms, as a child, that seemed perfectly normal in the 1960s and exactly where they should be residing. A good lesson in slavery.

A larger cousin to the budgie. Green parakeets in a park. Big and powerful enough to survive our own UK birds attacking them. 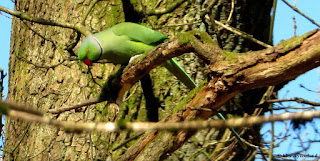 Same bird spotting a juicy nut on the ground I'd just placed there. "Who is a clever boy then?" 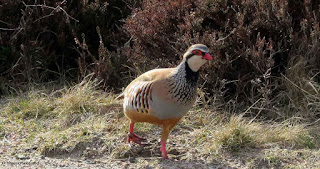 A red legged partridge. First one I'd seen close up in 45 years of hill-walking. Found on the much drier east coast hills- never seen in the soggy west. 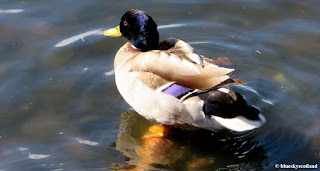 Think this is a mallard duck but with a less common purple/blue head and wing stripe. 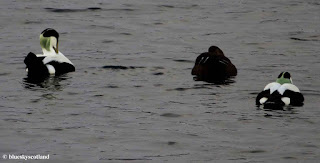 Eider ducks. The bobbing 'sea pigeons' of the Scottish coast where little rafts of them can be spotted along the shores, often heard first due to a soft cooing noise, floating over the water to reach ears on land. 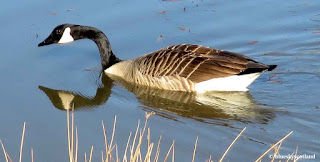 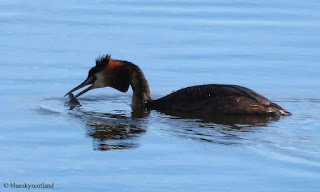 Great Crested Grebe with a fish. 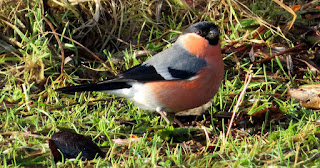 Bullfinch. One of the largest UK finches. 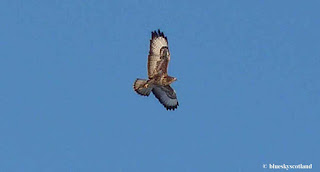 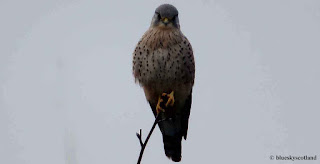 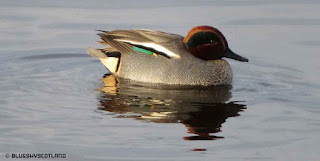 Teal. Duck. Common as a paint colour in DIY stores but the very first one I've seen in Scotland. More widespread along the English coasts I believe. 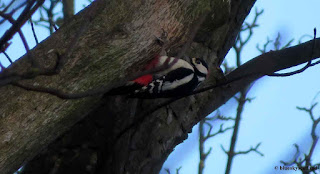 Woodpecker. Another bird that's hard to capture close up unless you spend time on it deliberately, waiting patiently for hours or reached/stalked with a giant zoom. Lucky in this instance it was above me  just long enough to get the photo. 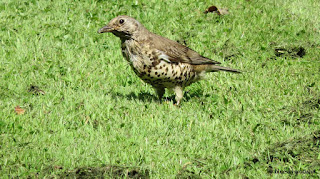 Two pigeons in love. Even these everyday birds have a neckband of green iridescence that sparkles in sunlight. 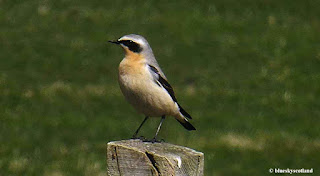 Wheatear. A small bird of heath, moorland, and mountain slopes. This is a personal selection of a few of my own efforts.

Beautiful colours of a male Pheasant. 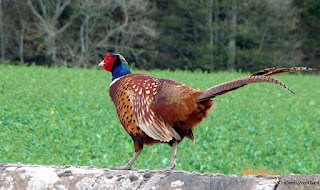 Another version walking along a wall. 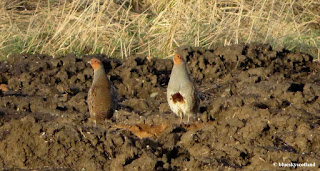 Grey Partridge. A field in Fife. 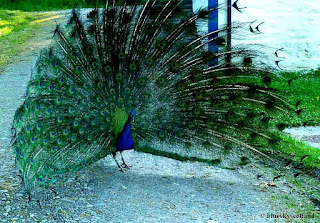 Rather annoyed Grey Squirrel. " Hey, Get me in here as well !   Where's my ******** selfie!? Nae mair photos o' they parakeets. They buggers are invasive species in the UK. No like me. I'm pure 100% Scotch so I is. I belong here, born and bred. No like them buggers that belong back in a cage or on a plate. It's no natural so it's no, having them flying aboot, enjoying themselves ootside. It's no real!!!" 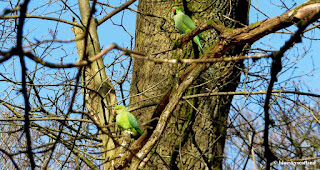 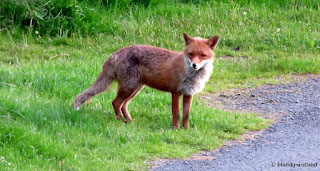 The other reason for this title was something I found out several years ago. Who is the most prolific songwriter of the last 30 years and sits third ( after Lennon and McCartney) with the most no 1 singles in the charts? (23 no 1s in total.)  He is Swedish- you might never have heard of him and his initials are M.M. Give Up?

Hence the alternative title I was considering for this post " I kissed/loved several girls... then found out it might have been a man!"

You will have heard of the long list of Birds of Paradise that have flocked though his studio doors however for his magic touch on their careers. Including Britney Spears, Pink, Katy Perry, Jessie J, Taylor Swift and many, many others. You could call him 'The Starmaker.' as he specializes in great catchy melodies and thumping pop tunes.

A great selection of birds - I have never ever seen a redlegged partridge, lucky you.

To be honest, I disagree that we have as colourful species as they do in other countries. A visit round museums which have stuffed animals, especially birds, from all over the world soon put us right on that one. I was surprised how much more colourful everyone else's wildlife was!

You have some great photos of some very rare sightings in Britain there! The woodpecker here though is common - I have at least 2 males on my birdfeeder every day - along with a male pheasant clearing up beneath it. I've only ever seen one green woodpecker though and that was last year in Patterdale.

Great shots, all of them. I agree about the cruelty of keeping birds caged, though we also had a budgie in the early 60s. His name, unfortunately, was Boris - I’m not sure why, I think we acquired him already named. He was also my first experience of death and I remember being really puzzled at the idea of burying him in the ground.

Thanks Rosemary.
Both types of partridge were only encountered once after 40 years of mountain and farmland walking. Either they are not that common except in a few East Coast districts or they blend in with the background well.

You would not be you if you didn't disagree with me Carol. I expect nothing less :o) All I get on my bird feeders are sparrows,(17,16 14) blue tits,(2) and an occasional sparrowhawk.

Cheers Anabel,
We had a budgie as well, a bright yellow one but then we got a dog and a hamster so the budgie didn't get out it's cage to fly around as much as the dog and hamster would have injured it. I still feel guilty about that looking back yet at the time i had too many other things happening in my life to give it my full attention. Children (i.e. me) can be really thoughtless- always excited by the latest new toy/gadget/thing and forgetting to give equal attention to the older ones.

Yeah, unfortunately, due my abundance of exotic birdlife, I get a buzzard and possibly a sparrowhawk predating on my poor birds. I banged on the window at it the other day as it was sat on my lawn waiting - it looked round at me in a bored manner, shrugged it's shoulders and continued to wait. I had to go out and threaten it!

Hello,
We have a partridge that looks like that red legged partridge in Nevada, U.S.A.. They aren't native here, but are a chukar partridge. They really like to scold us if we run into them on the mountain. Funny little birds.

Hi Kathy,
I was familiar with the Christmas song line 'and a Partridge in a Pear Tree' but I had no idea just how colourful it was in reality. A lovely bird yet it blends in so well with the knee high heather on the mountain slopes as to be invisible most of the time on the ground.

A fine collection Bob. I suffered from always having accompanying canines which had the effect of rendering all bird photos somewhat distant - and usually blurred.