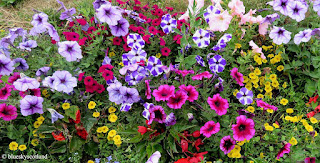 I noticed on a recent bus trip into town the mural wall along the Clydeside Expressway had several new murals I hadn't photographed before so that was a good enough excuse for a bike run to do just that. 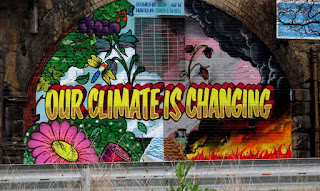 A good colourful climate change mural from a design by a 14 year old apparently. 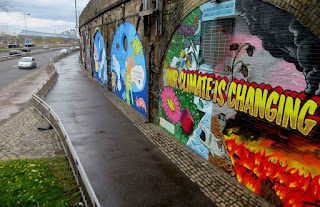 Looking along the Clydeside Expressway. As is always the case with humanity at large and its inherent instability great things were promised and expected at COP 26 in Glasgow in Oct/Nov 2021 but the focus of the world is easily distracted and the war in Ukraine, the food and fuel crisis etc etc.. means that it's inevitably just a fading memory that it ever happened at all. Life is like that. 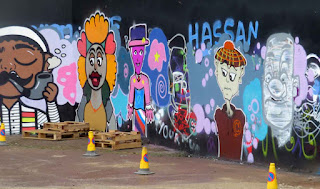 A row of politicians perhaps? I must admit I do get fed up at times with the vast assembly of talking heads on TV every week on various political programmes, (getting paid a great deal of money through their day jobs for voicing their opinions on anything and everything) while the vast majority of ordinary folk who actually go about quietly without any fuss and do all the stuff the country requires to keep functioning, (yet get paid a fraction of the ones who just talk for a living... or conduct a 'feasibility study' ...costing almost as much money as the actual work sometimes...before anything ever goes ahead.)... are mostly ignored and forgotten about. How did we end up with such a skewed society like that? Mind you, the last 30 years has accelerated the trend to elevate stupidity, mediocrity, and the warm blanket of superficial blandness descending on top of us... above all else. The 2006 film Idiocracy got it spot on and even predicted the rise of a Donald Trump type character as president... and first lady... who could yet make a comeback. 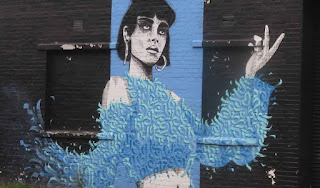 The lane at the back of the railway arches also has a wide range of murals. 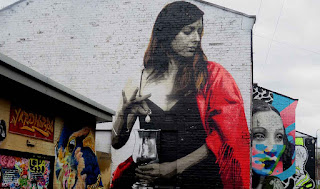 Having read the book on this subject years ago I instantly guessed this was a reference to the famous story of Cleopatra dropping a large pearl, worth an entire ancient kingdom's economy, into a glass of wine then drinking it once dissolved to show Roman General Mark Antony that she could easily beat him in a competition to throw the most extravagant party ever. Presumably, up until that point he was winning the game. No idea what message this mural sends us today though.... as the world is so different now... less unfair...especially now that leveling up has taken place... Glad I captured this Cleopatra mural as it's now gone, replaced by something else instead.

The last time I was down here, many months ago, also on a bike ride, this gated open area was closed off and security guarded... as some sort of big wigs party was taking place inside and the general public were not allowed in, unless invited. 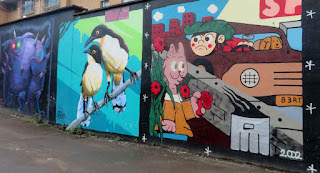 This time the gate was open so I took the opportunity to have a look inside. 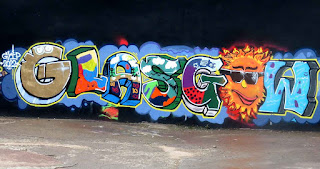 Some nice artwork. Wishful thinking though as it's rarely that warm in cloudy, windy Glasgow. Even today, mid May, it's too cold to sit outside without a thick jacket and hat on. 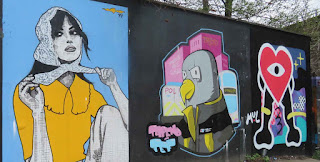 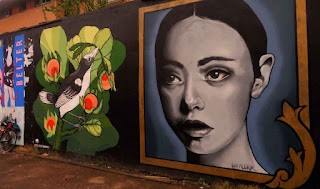 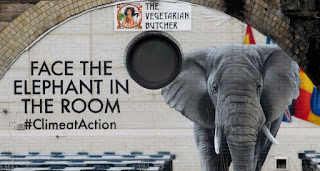 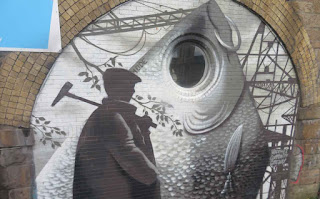 An older mural and a clever blend of Glasgow's shipbuilding industrial past with the city coat of arms story, as in a metal giant fish with a ring in its mouth. 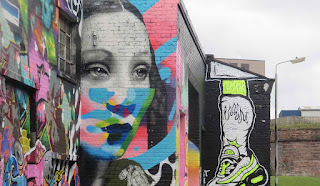 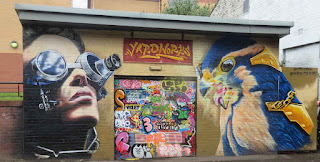 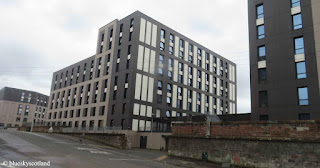 On a nearby back street around Yorkhill/Partick area I cycled across this district as the last time I was here new buildings were springing up to fill this once, house empty, long road corridor. Decades ago we used to park here to train on the railway wall during summer evenings, practicing rock climbing and toe and finger strengthening exercises on the near vertical but rugged sandstone embankment before the arrival of indoor climbing walls. A different age but a happy one... as we were young then as well. 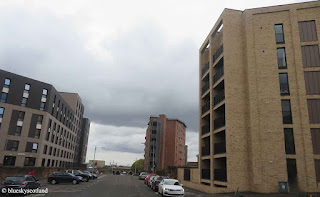 Yet again though I discovered that most if not all of these blocks turned out to be student apartments. 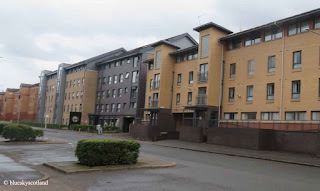 If you put all the student flats currently in Glasgow into one group you could build a sizable new town out of them. Don't know how they managed to house them all years ago before these purpose built student flats arrived... or did they just stay in rented digs with ordinary families, in cheap hotels, guest houses, etc? 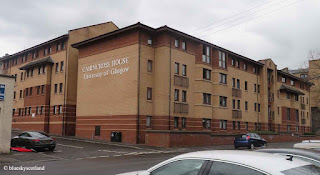 Finally... Saving on energy bills. Probably not work with young children in a household who would be too active and restless to sit still for long in sleeping bags but as I mentioned in previous posts a cheap 3 season sleeping bag is one way to drastically reduce heating bills, usually available in some large supermarkets or discount stores. Under £30 last time I looked, mine was £15,  but with years of future use ahead you could save £100 of pounds on energy bills. I've not paid more than £40 for central heating during the winter months for the last five years yet stayed toasty warm in my sleeping bag of an evening, only putting the heating on for 30 mins or so morning and evening if it's sub zero outside just to keep the pipes from freezing during sustained severe weather periods although running the various household taps for 20 seconds every few hours also helps any ice from forming inside. Not a problem at all if it's above freezing or just an overnight mild frost. A cheap padded jacket and hat worn inside the bag also helps if it's really cold and can also be worn outside for general use. It was a mild winter last year so my heating was rarely on at all.  I could pay the heating bills if I wanted but I really do grudge giving them money for nothing as that's one place I can save money on... without much hardship on my part. Just a useful tip that may work for some.  That and a good box set TV collection plus paperback books and CDs for entertainment which you can usually pick up in local charity shops for a couple of quid every few weeks to make life more enjoyable. Frugal living doesn't mean you can't have treats.

Not been down there for a bit, and didn’t know some of the murals had changed - will need to take a look! Yard works has a festival on 18/19 June when you can see murals being created.

Everyone's alright for heating bills while they're on mains gas - just wait till everyone's forced into electric heating and all-electric housing - it's a complete nightmare! But, even now, gas is seriously cheap. Not sure why they keep putting the electric up as we're not short of that - only gas! I had to laugh that some people were bleating that they can pay up to 80p per day on pre-paid electric meters - I pay around £10 per day and I keep a very cold house and am obviously out a lot.

There are some great artists in Glasgow obviously - how they do such good artwork with spray cans I've no idea. But the climate change folk make me laugh - we've been telling them there's a problem since the 1970s - suddenly they've taken it on board and reckon they're the ones who've thought of it!

I think it is healthier not to have the heating too high indoors when it is very cold outside. It's better for my asthma anyway! And as you have pointed out, it saves on the energy bill!
Fantastic murals you have shown us, I am not a big fan of them normally but if they are very good, like these, I can see the appeal.
Hope y'all are both doing well these days, Bob! (Oops, I had to change that, I typed "Bog"! HA HA)

Hi Anabel,
Good time to go then. Elaborate murals can be stunning but equally I laughed out loud when I looked at a recent Street Art Utopia post of a patch of sidewalk grass growing in a crack turned quickly into a comical animal with added feet and beak. Simple idea- but really funny and creative.

It's cheap for me Carol as I rarely put it on. Shows how out of touch the Tory party always is, (and most politicians in general but especially them) when £30,000 per year was recently quoted on TV as a breadline wage teetering on the edge of poverty. I've never earned that despite having had some decent past jobs on what I considered to be good money and have never even been close to reaching the 'average UK wage' at any time often coming in 10,000 or more short of that figure. However, I can get by on under £4000 a year quite happily without asking the state or food banks for anything. Decades ago I used to deliver stuff round Conservative and Labour MP's homes and when you're earning £100,000 a year or more, staying in a large detached house in a posh estate, it's an entirely different world you experience to most Labour MP's abodes, as many then ( but probably not nowadays) stayed up tenement closes, in modest housing, or starter homes ( i.e. living just like ordinary punters do) so they knew what the real world looked like first hand. Mind you, back then labour took working class votes for granted... and lost them.

Thanks Kay,
Yes, I'm doing fine and still watching American Pickers, Alaskan Bush People, Lone Star Law and CSI- NY to get a better understanding of the USA. Murals, if well done, do add a slpash of colour to any city or town.

I hope you're not assuming I'm in a huge house - it's such a small bungalow it's almost a shed! ;-)

Never even gave that a thought Carol. I was merely surmising that someone on £100,000 a year would have no clue what it's like to get by on £40 to £60 a week for years on end or dread every unexpected bill that comes in....or have essential things to buy each week, like food, with no money coming in... let alone afford any luxuries. I'd imagine that would grind anyone down.
Mind you, if I had £80,0000 to £100.000 a year coming into my bank account annually I wouldn't give a toss about the plight of the plebs either :o)
Which is why it's two very different worlds we live in and always will be. 'We' not referring to you or your abode in any way.... but referring to 'them'