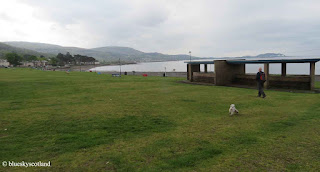 An unusual walk for me these days in that  A....I was up a hill....B...I was with my old hill-walking club friend John... and C ... I managed to get out of Glasgow for the first time in a long time. We went an hours drive away to the seaside town of Largs, which as you can see here, was overcast and murky when we arrived but the weather forecast promised blue skies and sunshine later. 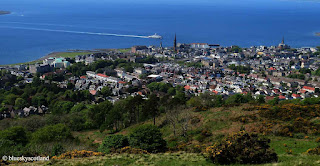 Largs is a popular and attractive town on the Clyde Coast with a fantastic backdrop of green hills behind it, which is where we were heading after parking the car on the seafront. The  walk starts here via a couple of nice local parks reached via May Street so appropriately named. 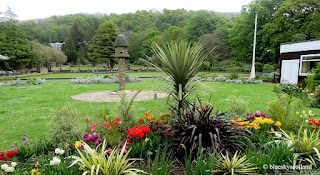 The larger of the two back to back parks beside the bowling club and main road into town. 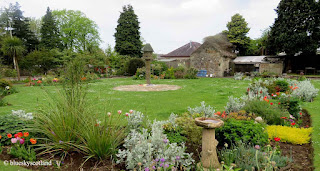 We didn't have to visit these two parks but as it was the month of May and they would be looking at their best, flower wise, it was worth a slight detour to include them. John is a hill walker...like most of that breed.... he's not really into parks. "Where's the path into the hills then?" he asked, unamused by my photographic detour. "I've been led astray!" 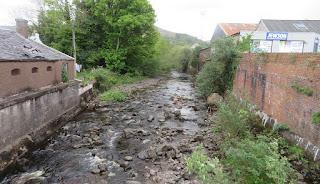 The path into the hills follows the left bank of the Gogo Water, seen here, and any street leading uphill on the left bank will do. We took the one running past the old Largs Academy building, now demolished and replaced with low level modern housing, which led us up towards Flatt Farm on the OS Landranger map. Flatt Farm may sit level on its foundations but the track running past it is not. At the high point of the last houses you can either go steeply up this farm track leading straight into the hills, cutting out the wooded and very scenic Gogo Water gorge, or take the slower route down through this green sylvan valley. 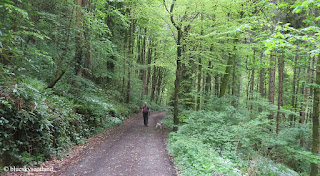 We took the valley path down through the woods as it had been many years since either of us had visited it. 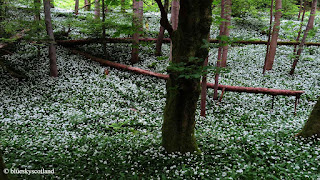 It was as beautiful as I remembered it with a wide thick carpet of wild garlic covering the ground between the trees. 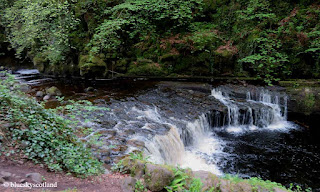 Dampness and shade is what they thrive on and the river, with it's many small waterfalls, and steep wooded slopes provides ideal growing conditions. 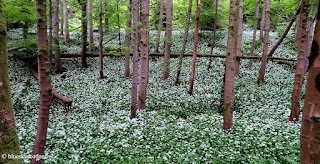 Some of the best I've seen anywhere at this time of year. 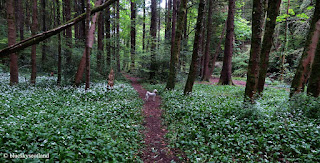 At this point I should mention we had John's new dog with us. I've never been all that keen on poodles when I've seen them on the street, thinking, maybe wrongly, that they were snappy and agitated little things but this dog changed my mind by being a complete delight. Calm, not scared of anything, with bags of playful energy and curiosity... despite being a very close match, size and colour wise, for the new born lambs bouncing around on the slopes above. 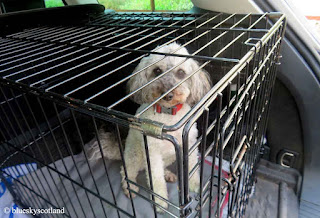 The beast in question locked securely in its prisoner transport device. 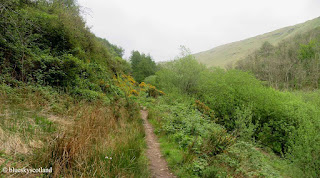 One change I did note from earlier visits is this new path we were funneled up towards, rising diagonally halfway up the hillside between the high farm track and the now largely unfrequented path beside the stream. This is a nice path, seen here, but I also liked following the stream all the way up on previous trips, even though that lower path twisted and turned a lot more but had plenty of small tumbling waterfalls as compensation. This new track seems to replace that lower one beside the river with several new but small buildings noticeable between the end of the woods and Greeto Bridge. Some kind of small scale hyrdo scheme being our best guess but thankfully it's not that intrusive and does not spoil the surroundings much. 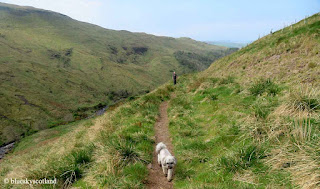 We also noticed practically the entire open slopes of this small glen/valley on both sides had been recently planted with deciduous saplings supported by the usual wooden stakes and slim white protective tubes. Examples of this new urban lowland Central Belt forest is an increasingly visible presence nowadays on many walks. No sheep or lambs on the hills here until we reached Castle Hill so freedom for the young hound most of the way round. 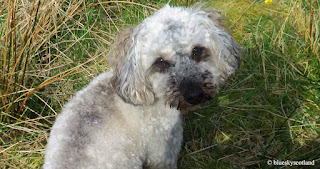 New dog close up. Looks quite mournful here but it's not at all being bouncy and perky with a frankly disturbing and baffling meerkat habit of using any prone relaxing humans on lunch breaks as a high vantage point... our reclining knees, shoulders, and even heads convenient sitting posts to survey the surrounding landscape from. The Olga Korbut and Nadia Comaneci example of athletic scrambling/climbing then balancing poodles. Little need for a prehensile tail. Sharp claws I noted when it was my turn for a human/dog summit attempt. 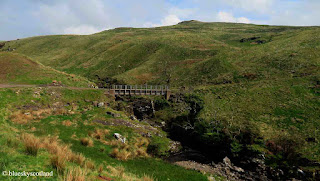 Our horseshoe route across the now wide open moors took us past Greeto Bridge, seen here, then across the chasm ( deep narrow trench and waterfall) to Rigging Hill, 391 metres and Castle Hill. It's a great scenic circuit and brings you out directly above the town of Largs and the Firth of Clyde islands. 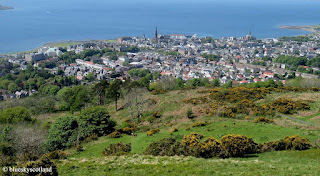 The Great Cumbrae to Largs ferry service arrives here as seen from Castle Hill. Note the walkers below on the path. 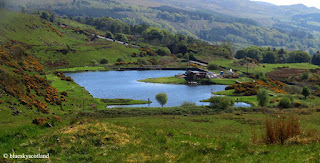 Trout fishery on surrounding slopes. The path down off Castle Hill is a joy, with a long flight of wooden stairs then sheep and lamb dotted grassy meadows, followed by scattered trees, yellow coconut scented flowering gorse bushes, and world class views. Blue skies and sunny weather had made an appearance by this time although distance views over the Firth of Clyde islands remained hazy. 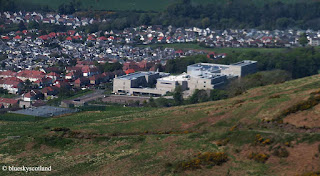 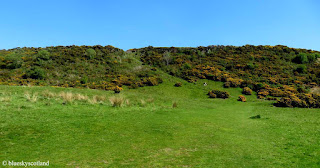 Gorse bushes and grassy sward. Not too steep a descent so no crunching knees. Aging limbs not so keen on brutally steep, long descents these days so I didn't have to rest halfway down on this one at all. 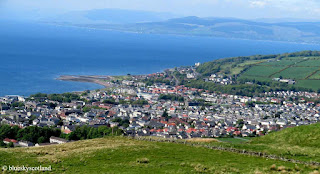 A view of Largs and the Firth of Clyde. 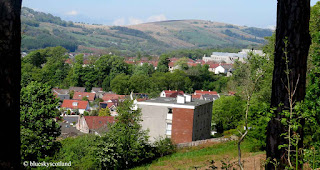 The scenic hills around Largs. The path down Castle Hill took us out directly above the bowling green and local park I mentioned at the start then an easy stroll back to the car. 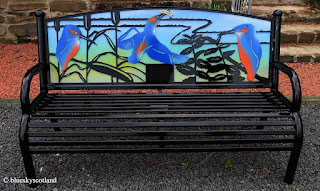 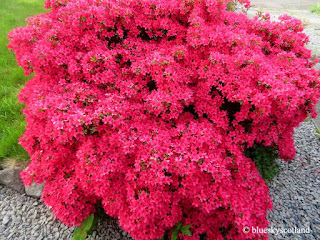 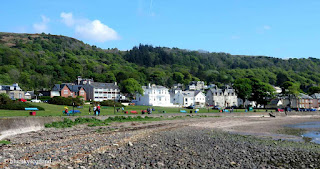 The scenic beauty of Largs.  Being a popular place for day-trippers it's probably better to arrive around 9:00am or 10:00am on a good day as parking spots along the coastal strip fill up quickly here although you can always find a discreet place in the quieter suburban back streets without parking beside someone's house or claiming their spot.

A very enjoyable day out and I wasn't as bad at hill walking as I thought I might be. Still fit and active. Evening meal of asparagus! pasta, turnip, curried mince, carrot and tomatoes. Deep fried avocado and kiwi fruit slices and three deep fried mars bars to follow as a sticky chocolate pudding treat. The healthy option of choice as recommended by my local food emporium booklet ' the rat and moving maggot guide to eating indoors on a very tight budget. 2022 government economy issue for testing times.'

To heat or eat... that is the question....sampled raw or covered in batter...

Poodles are only silly little things when they have silly little owners (which, unfortunately for them, they often do). These are the kind of owners who cart the poor thing around in a pram instead of letting it bounce around and walk! The using folk as a vantage point sounds amusing but I was thinking about sharp and possibly dirty claws when you said!

You never ate deep fried Mars bars - I don't believe anyone ever has! It's just a myth surely?

I like Largs since I had a great time there with 3 drunks (a woman and 2 men) and then camped up in the hills towards Loch Tom by sleeping in my Cortina.

That’s one cute pooch! I think we did that walk at the end of the first lockdown. Seems an age ago now.

Hi Carol,
The pudding line was a joke as in how do you make fruit unhealthy... by deep frying it in batter. You would think that it would be just a myth but I looked it up online and apparently one fifth of Scottish chip shops sold deep fried Mars Bars since the craze started 30 years ago. I'd imagine only children, teenagers for a dare, or curious tourists would try them though as I've never heard or seen anyone ordering one or even as a listed item on the menu board. "Fry it and they will come."
I have had kiwi fruit and an avocado in the last few days though which gave me the idea in the first place. Kiwi fruit in the raw I like... Avocado I did not. Not juicy in any way and tasted like bland cheese, although it was ripe enough. Would not get one again but curiousity satisfied as my last taste of one was as a teenager. Thought my taste buds or the fruit might have altered since then... but no.

Hi Anabel,
it is a cute dog... and very fast at running.

I am not keen on Poodles either, may be its to do with the way that their owners tend to have them clipped. Your friend's wee pooch is adorable with such a very cute face, and I would be happy to have him accompany me on any walk.
Deep fried Mars Bars - yuck - why do that? Mars bars are delicious as they are, but not for me, far too many calories.

I prefer Mars choc-ices anyway - and you definitely can't deep-fry those! I think they'd be revolting and I'm sure you're right that only teens and curious tourists will try them!

Richard hates avocados too - he says they taste like soap! There are 2 types - the longer, lighter green ones are 'fruitier' in taste but I don't like them as much (not soapy enough ;-) ) and the darker almost black ones which are more squat in shape...

Cheers Rosemary,
If my freind had not told me it was a poodle I would not have guessed as it looks different, probably because it's not been clipped into the usual shape from past memories of what poodles used to look like although I can't remember seeing one like that for a while now.

Hi Carol,
Just had an Avocado recently, (in a perfect state of ripeness) after eating my first one in a salad around 40 years ago. This second one was only 60 pence so I snapped it up thinking my impression of it might have changed over the years. Nope. For a fruit it was a real disappointment, hardly any taste at all and a texture resembling slightly soft cheese. Incredibly bland so I'm amazed they are so popular even if they are healthy. Be another four decades before I buy another one. Tasting like soap might be an improvement as at least then it would taste of something. Also a fruit without any juice in it at all so that's another first. In a list of 100 fruits or veg I'd place it close to last.