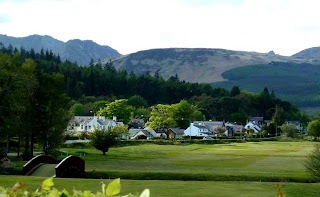 Bob Again!!! Alex still resting his flipper.
As my knees took a bit of a pounding on Rhyolite Romp I thought I`d give them a rest as well from  the constant downhill grind of hills.
As I`d cycled round the north half of the island of Arran last weekend I couldn`t very well miss out the southern half so a week later still in settled weather I was back on the busy car ferry to Brodick to cycle round the southern end.
Usual crowd of assorted cyclists on board again on this popular road run but also a good example of the Gini Coefficient (gap between rich and poor on the boat).Guess who bought a Times newspaper to pass the journey with longer articles to read :o)
Normally it was the usual mix of average families,golfers,cyclists and such stomping the decks but on this particular occasion there seemed to be a few carloads of sloan ranger types..... folk with very posh accents who,by overheard conversations,where used to more exotic locations overseas.
Maybe it was the prolonged settled weather here and the rising costs abroad but they seemed to be enjoying themselves anyway among the lower ranks.In sunshine Arran is the equal of any place in the world. 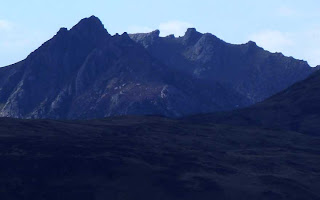 Also aboard were a few young teams from the nearby coastal towns on the mainland ( I`m practically an honorary member now I,ve bumped into them that often) keen to soak up the sunshine.Some looked as if they were heading for the campsite and others for the facilities of Brodick beach.
I noticed with some  amusement that although polar opposites both groups seemed to meet around the back somewhere and almost touch shoulders on certain aspects of behaviour.
Both spoke in raised tones attracting the attention of other normal voiced passengers.Both groups surveyed each other with loathing and disdain......and on the way back both groups seemed to have consumed large quantities of alcohol  and found everyday  mundane things very funny.Like the extreme right and left in politics maybe not so different after all. 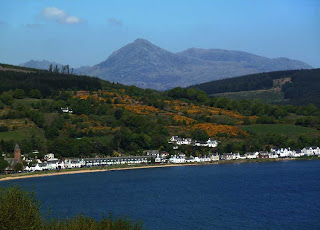 The first village encountered once up and over the hill  from Brodick was Lamlash.This is where you catch the small ferry to Holy Isle.The entire bay,a tiny part of which is seen here is a no take zone where fishing is not permitted to allow stocks to recover.This community led project seems to have been a big success and they may extend it to other areas in the future.
There are 18 separate villages on the island each pretty and  all different.
Whereas Lamlash was a straight row of buildings clustered around the bay the next village ,Whiting Bay, had a gently twisting look to it as the road followed the natural contours of the coast. 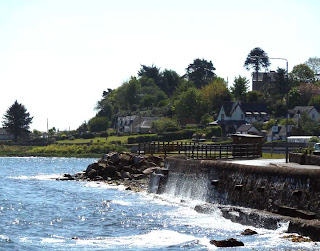 I couldn't choose between them.Both delightful in their own way.
Another  warm, muggy hill climb followed pestered by flies as it was through rolling farmland plump with cattle.My joint favourite village on Arran(tied with Corrie)  soon came into view. 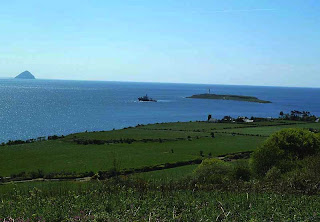 Kildonan.
Its a lovely little place reached by a panoramic descent through carpets of yellow gorse.At this time of year the cloying sweet coconut smell  of its flowers is overwhelming.The very essence of spring in a sniff.
Great views from here over the small lighthouse adorned island of Pladda,the further away Alisa Craig and the dramatic cliffs of Bennan Head. 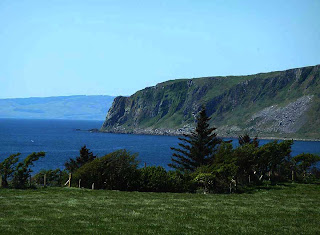 In the distance offshore a helicopter was busy transporting materials between moored ship and Pladda.Otherwise it was quiet and serene. 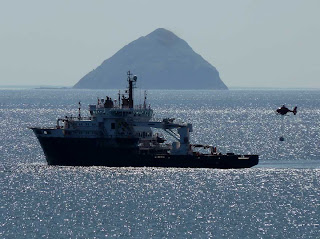 The only problem with a village at the bottom of a hill is that its usually another steep climb back out of it again and so it proved here. 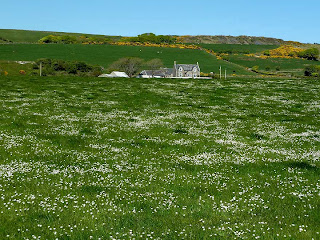 Walking time again leading my rubber and metal donkey up between 10 foot high grassy verges covered in a myriad of wildflowers.At the top more green fields and gorse followed....blue skies and small fluffy clouds above.
Maybe it was the bold vibrant colours all around...or maybe just the intense heat in this windless hollow but my mind suddenly flicked to an old film seen once in childhood in a Paisley cinema with the snow falling outside and a warm honeyed land onscreen. Song of the South. Part real life setting part vivid cartoon.It doesn`t take much to trigger my imagination and I was transported back to zip a dee doo dah land .My head humming with sticky tar babies,whizzing bees,talking bullfrogs and all singing all dancing blue birds.
Well... there were several real life Brer Bunnies  hopping around me...... 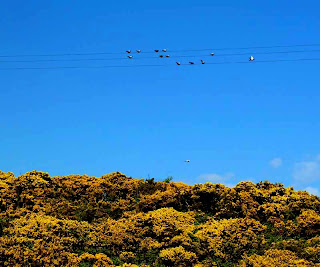 Even birds perched on  nearby wires seemed to resemble musical notes on a song sheet...or maybe it was just heatstroke.We Scots aren`t used to warm weather.
Having slogged up the String road just the week before I didn't fancy it again so soon so opted for the Ross instead.This also cut across the interior of the island.A new road for me  and an unknown  proposition on a bike.
The first stretch was really nice,a fertile green valley and I thought I`d picked a winner.It was steady paced up a reasonable incline until I reached the last establishment,a remote Buddhist retreat. 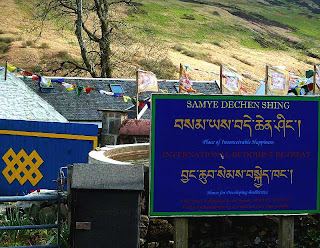 At this point I certainly wasn't feeling inconceivably happy,noticing with dismay the long uphill tarmac ribbon snaking beyond.At this point it got tough....whereas the String road (for me) was a no brainer walking affair halfway up due to its steepness, my age and lack of lower gears on my bike this sneaky son of a slippy scoundrel beguiled you into staying  put in the saddle.It was just at the right angle to be able to bike slowly up yet not steep enough to make walking the better option.A real bugger!
I peddled and peddled..... and peddled and peddled.... and eventually arrived at the top of the pass in a sweaty swearing heap,cursing myself for being suckered into its trap.
I actually appeared to be looking down at the summit of Holy Isle from here.Thats Mullach Mor.a rocky 314 metres high.No wonder it was hard work.I`d cycled 1000 feet of relentless uphill in a oner on the hottest days of the year so far......and I only had a sip of water left in my bottle at the top....boo hoo! 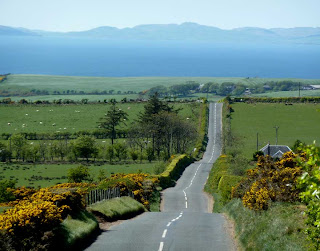 Cooling glide back into Lamlash though then another joyfilled uphill pant over to Brodick where I treated myself to a can of coke and bag of chips,having a well earned rest beside the pier.
Back over to Ardrossan and a lovely sunset to end the day....then another belated 10.00pm evening meal.
1000 feet in a oner!!!  Went to bed tummy stuffed with a very big head. 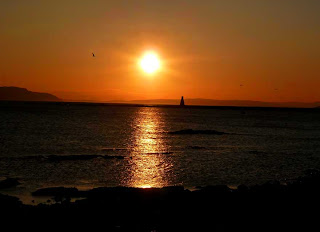 I sweated just reading of your 1000 feet uphill Bob.
I enjoyed joining you on your bike ride though.
Great scenery.

Another great cycle. I'm less familiar with the Southern half - we did it a few times all round but mostly it was your earlier Northern circuit we did or else nipping round the top on the way back from Kintyre. Maybe if I negotiate a whole day off for cycling I'll take a trip over to Arran, you certainly make it look tempting, though the fine weather does help.

To Jim.
Cheers.I,m now finding out what its like to do a solo blog.If I,m not thinking of new places to go I,m writing them up and picking best photos for next post.Hats off to anyone that does that weekly.Its a full time job in itself!
Hurry back Alex!!!! Help!
To Andamento.
Kintyre,s one area I,m not that savvy with hills wise.I,ve normally passed though going to Islay ,Jura or the Mull once.Thank you... You,ve just given me an Idea for a new trip:0)

To the Glebe Blog...
Cheers Jim.
It must be one of Scotland,s best Islands.I prefer it to Skye but only because It gets better
weather.
To Andamento.....
Kintyre,s an area I,ve only ever passed through going to Islay or Jura.I,ll need to explore it more.
bob.

Lovely. I was worried about the rubber and metal donkey for a minute...

I've seen a ship-'copter combo exactly like that on the Sound of Islay a few times. Delivering salmon smolts to the salmon farm near Inver on Jura.

Noticed quite a few posh folk on Coll and Tiree recently. I wouldn't mind them if they weren't so ostentatious with their huge motors, braying voices and general air of owning the place while looking down their noses and failing to acknowledge the lower orders. Other than that, they're fine!