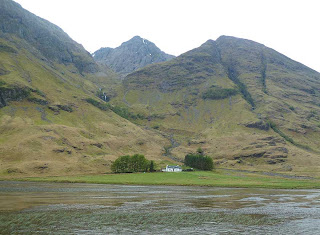 Picture this.Glencoe at the start of a public holiday. The royal wedding.Hip hip....A sunny morning in this normally cloud attracting glen.Car parks full of cars and walkers keen to get away from the day long saturation coverage of the event in the media including myself, Scott, Froodo (young Alex renamed at old Alex suggestion to avoid confusion) and his pal Ian.
We spent hours walking along a "path" below the shoulders of the highest mountain in Argyll (Bidean nam Bian) an area crawling with hill walkers yet we were totally,utterly alone.
Where were we?   Rhyolite Romp.....a monster traverse line that runs on narrow ledges above sheer cliffs of crumbling ancient lava high on the face of Aonach Dubh....the most westerly and spectacular of the three sisters towering above the glen.The one with Ossian`s cave on it.
Even if you`ve never been to Scotland you would probably recognise these iconic buttresses from countless films.Highlander,Braveheart,Rob Roy....hardly a big budget film made about the Highlands does not  have  at least one  view of this triptych. 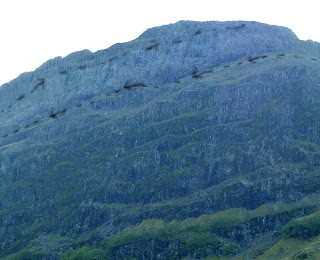 A while ago Scott and myself had reminisced about a previous visit along these narrow ledges in pouring rain.That was about ten years ago.My only visit up here.Scott had returned with others a couple of years later still in not great conditions.He must like it up here in damp weather :o)
Anyway I mentioned out loud, unthinking, that I wouldn't mind another crack at it before my bottle for heights disappeared  down the plughole with age and he said "no time like the present.. Right. That sounds like a plan then!"
That,ll teach me :o( 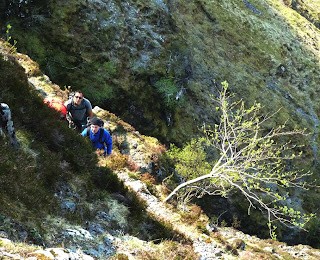 The route starts from the car park at Loch Achtriochtan then climbs up here...Dinnertime Buttress to reach the ledge.An obvious fault line creeping between lower vegetated  crumbling basalt and a cleaner,steeper more solid rhyolite band above,hence the name. 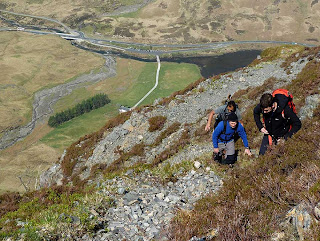 You can see the car park start point below in this photograph from Dinnertime Buttress.
As a guide we were using an old favourite among  keen scramblers. Scrambles in Lochaber by Noel Williams.This is an excellent book if used with due care and diligence as it often takes you into wild and spectacular scenery above huge voids.
Although technically down as a "walk" which I suppose it is really ,its also the most extreme example of outdoor walking I can think of in Scotland.Its no place for a slip or stumble and requires a good head for heights and steady footwork for hours at a time as it wanders across a kilometre of sloping grass and rock,some of it a bit on the loose side.It then doubles back under Ossian`s cave weaves up onto a higher ledge via a steep ramp before another kilometre of joyful abyss gazing before finally topping out onto the shoulder of the mountain. 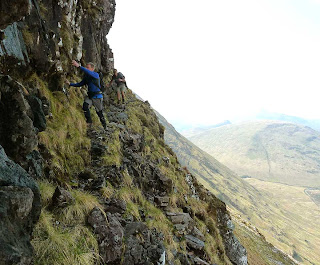 This is us at the start of the ledges.Unfortunately to get good pictures I had to go in front. I had thought ten years later we would now find a reasonable path established up here but it doesn`t look as if it gets many ascents at all.It would be interesting to find out how many people use this tip toe across the void in a year.On the lack of foot rubbing  hereabouts I bet the summit of Mount Everest gets more traffic per season. 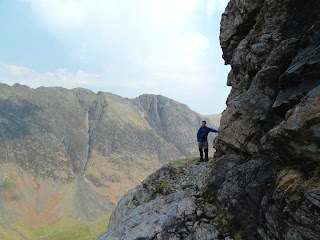 In winter it would be good preparation for the north face of the Eiger.Its that kind of route.High risk of self avalanche though methinks.... 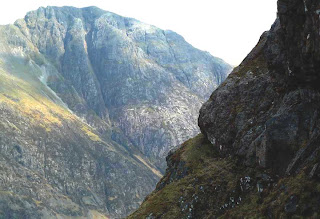 The traverse crosses several shallow gullies then ends in a deeper gully leading you under Ossian`s cave.We followed this up past several large boulders to a point where it was easier to scramble onto the arete/ramp than follow the narrowing gully. 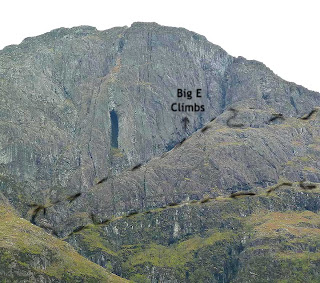 Some big E routes go up these walls to the right of the cave.
Yo Yo  E1
The Clearances  E3
Eldorado  E4


Just looking up at them produced an involuntarily shiver in us all.Although I`ve done some easy grade rock climbing this stuff is a whole other level. 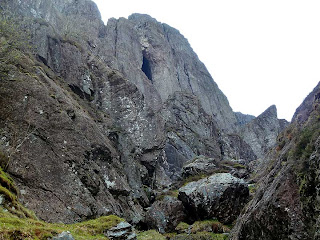 The cave itself is a miserable damp sloping slot.Ossian must have been a spider to feel happy clinging on in here as its floor is at a 45 degree angle caused by a large block falling out Its certainly not worth the loose and dangerous climb to reach it.A fact a lot of folk find out too late as bad falls and fatalities tend to happen on the slippy descent.Years ago there used to be a little visitors book in it but it was removed after so many accidents. 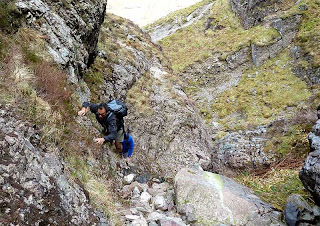 The scramble up the ramp was enough for us as a strong gusting wind had appeared on these upper levels.A bit off putting  balanced on narrow ledges and aretes.This was also an area that required careful route finding.We ended up too high (I blame the one in front! ) so we had to backtrack down steep grass to find the right ledge. 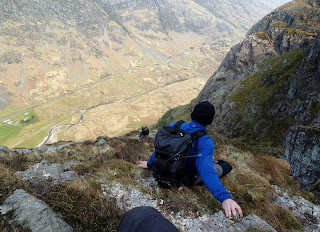 Good photo opportunity though for the man with the camera :o)
Hours of concentration,a buffeting wind and endless shuffling sideways took its toll on some (myself and Ian mainly) so we bailed out before the full romp ended when we saw an opportunity to escape up grassy ledges to the top.It was then a grateful plod to the comfort of the tourist track descent which seemed almost level ground by comparision. 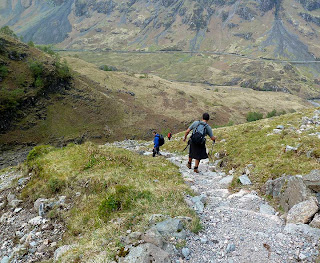 On the higher slopes waterfalls were being blown back uphill by the wind.
An adventurous and interesting day out above an awesome abyss.Would I do it all again in another ten years?Yea gods....I certainly hope not.I`d rather be poked in both eyes with a cactus.
Mind you even Rhyolite Romp is too playful a name for a route that takes you across such mind blowing territory........Steepy Creepy Crabcrawl sets a more appropriate tone I think and gives you more of an insight as to what lies ahead for your soft,easily burst, little body to tremble at...
And on that note...........the end. 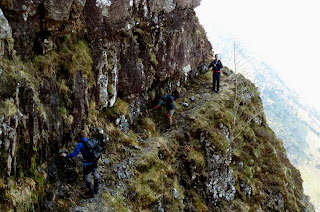 Looks a grand day out. Regarding the book, I am sure that I have heard somewhere - perhaps read it in 'High Places?' - that the Ossian's Cave visitors' book was lost after Dougal Haston threw it at someone below.

Toddy`s pal died on the descent from the cave about 10 years ago.Remember we met him,mad sea kayaker,in the pub in Tayvallich years ago.
Toddy fell heir to the kayak..

Yes Gavin. I heard it was him too.
Best thing to happen to it.Even good rock climbers shudder at this v.diff scramble up weeping grass and moss to cave.Heard its been upgraded in latest guidebooks to put people off even attempting it.
bob

I done the cave last week and it's a nightmare, soaking wet and loose vegetaion to say the least. It was a climb I had always wanted to do but one visit is enough.

To Anon.
You,ve got more bottle than me then.Well done.
I had a look at it years ago and gave it a miss.Looked ok going up but descents like that one always give me the creeps.
bob.

Yes it's a tricky climb and decent, when I was 5 my auntie Jessie from Kinlochleven told me she climbed into it, my father drove us up from Edinburgh regularly, we would be driving past and she would always point up and say "I was up in that cave once". I didn't really believe her until 15 years ago she showed me a few photos of her inside the cave looking down.

I must point out that we were roped to climb into the cave, it's very wet, lots of loose vegetation and wet rock, it's horrid climbing, we did not unrope until we were down again.

Would I do it again? Probably not :)

Cheers Martin.
That,s me put in my place {:0)
Your Aunt must have been one brave lady in her prime.
Reminds me of a line in classic climber J.H.B. Bell,s book about a route he climbed with his wife.
"I found it rather tricky but Mrs Bell found it reasonable in her stocking soles." or words to that effect.
And Bell was the guy that put up the long climb on Ben Nevis and thought nothing of cycling as a boy from his house in Auchermuchty to Schielallion for a days adventure before his tea.
I might as well just give up now!
bob.

I'm going to do the cave again sometime late August, I forgot mt camera last time so I'll get some good photos and a video.

Not many photo's going about.

Hi Martin.
Best of luck with that.
Hope you pick a dry day and stay safe.
bob.

I'm in Strontianm just now hoping to do the cave this week, weather permitting. Will keep you posted.

Oh, and I'll get some pics up. Cheers

Weather is not looking the best Martin but good luck and a safe trip.I,ll be keen to see the photos.
bob.