Hi Folks.
With Alex being out of order at the moment and my replacement model having done a runner as soon as I let him out the box (.bugger they are starting to learn!) I was on my own again doing low level things.Fear not!Rather than inflict another photographic flower fiesta on you this week I had a surprise when up in the attic clearing junk,finding several  half forgotten boxes of our  old club adventures.The quality in some of these isn`t that great but it gives them a nice retro feel. Like yeah baby!A time when we were hot and our Mojo was in full swing.
Needless to say Alex features heavily in them.....either I wasn't doing any climbing.....or,as usual I`m the one taking most of the pictures.Did find some of me though.
One from the old days way back in 1983.This isn't me either. 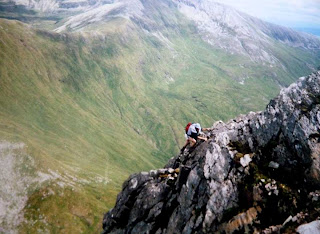 Lets face it neither Alex or myself are likely to be doing anything as athletic as this again so I might as well take this opportunity to expose ourselves in public.
It started with Munro bagging....an enjoyable slog.....then we found we could scramble up some....we liked this....it became a game.Lets see how many hills you can scramble to the top of adding extra miles on to reach remote crags in the process.
As addictions go hillwalking is a pretty good one with a fairly light  monkey on your back(Rucksack).But then we read a book and discovered mountaineering.For this you had to be fitter and climb sharper ridges with  a bigger monkey (pack) gleefully clinging on,shunning the tourist route.
The game changed to getting fitter and building up our mountaineering edge....
We only ever climbed at a easy standard.V.Diff to VS mainly....... but we we very keen. 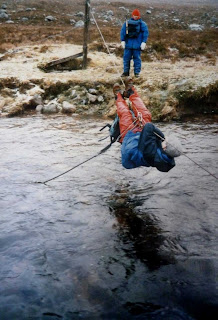 In those days some rivers didn't have bridges.It would have been easier and drier to wade this but we were now "mountaineers".The easy way was no longer an option!
Alex ended up dangling in the river halfway across this with a soggy bottom then a dripping walk into the bothy.But he did have dry feet. 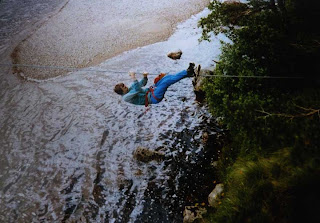 However we learned by our mistakes.I made sure the next one was a lot higher.
Even before starting the long walk in from the car park "mountaineers" had to toughen themselves up.Danger might lurk round any corner ready to test you and find you wanting.Hand strengtheners in the back seat of any car went without saying , club press ups in  pub car parks on the way back to the tents after a few pints were a given.Five minute finger hangs from  high door lintels a necessary evil to be endured at home.Danger would find us ready and prepared!
All this activity didn,t seem to improve our grades much ....But it was good fun. 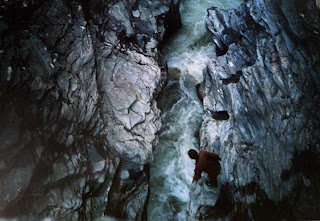 In retrospect this is one of the dafter things I`ve done.Not a hard jump but it is midwinter on sloping ,slightly damp ledges. 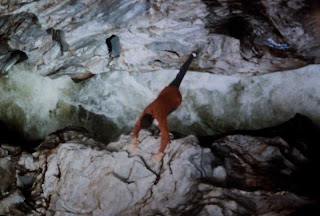 Next we felt ready for climbing.This demanded an even bigger pack,loaded down with ropes,harness,assorted ironmongery and special sticky shoes which on some routes were sadly not as sticky as we`d hoped. 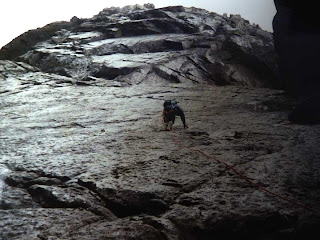 This is Alex,middle of a rope of three,on the Cioch Slab in Skye in heavy rain.We had a lot to learn.
Sticky shoes didn,t stick as well in the wet we soon found. 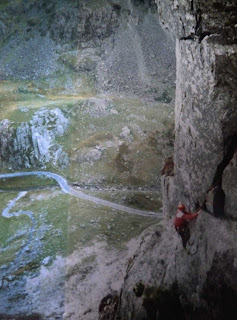 One of me in Wales.Cant remember the route.Lets call it grunt and shuffle.My normal climbing style. 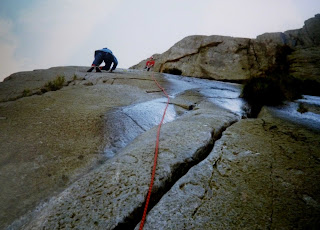 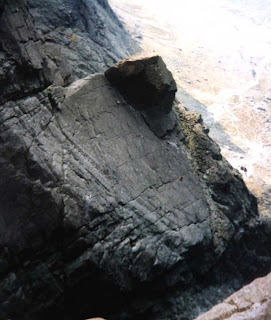 Climbing Eastern buttress looking across at climbers on the Cioch slab.Skye. 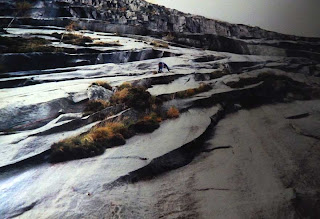 Good one of Brian leading Spartan Slab.VS.Glen Etive.
We even tried the odd sea stack adventure. 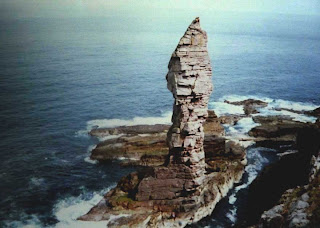 The Old Man of Stoer.VS.220feet (66metres)
Alex was more concerned about the rope traverse at the bottom of this route but his trousers remained dry.On the outside at least :0) 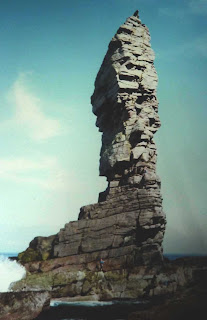 Alex belayed at the base,Brian climbing.Big wave about to pour over the ledge. 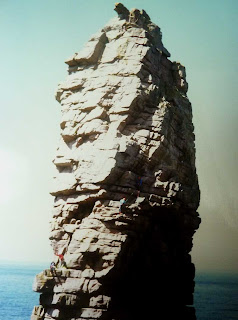 They were in a queue and had to wait halfway up for their turn to summit and abseil off. As I didn`t fancy leading this route myself I elected to be the photographer that day.The abseil off the summit looked the hardest part,rope spinning in the air with rotating little climbers silently moaning most of the way down.It put Alex off the Old Man of Hoy anyway which is twice the height and a harder grade of climb.
We decided it was time for a step up in a different direction instead.We`d filled  our rucksacks to bursting ,we`d  rock climbed.....we`d  recently discovered multi day back packing,a great way to let half the contents of your house see the great outdoors from the comfort of your groaning shoulders... 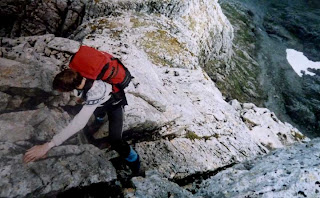 We`d done sea stacks ,sea cliffs and climbs all over the UK..... 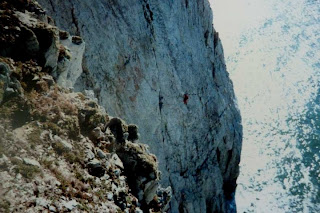 We had made the weight on our shoulders as heavy as it could get given the size of the rucksacks...brilliant...but it wasn't enough...There was only one thing left to do then....make the mountains higher.Much higher.
We were off to the alps..........

To be continued.
Posted by blueskyscotland at 15:44

Goodness you and Alex were certainly intrepid in days gone by Bob.That was some jump.
You need to be fit to tackle Scotlands Mountains.

It's a sad coincidence that you mention the Cioch Slab as I've just read of a fatality this week on the Cioch Direct climb.
A dislodges boulder seems to have caused the problems.

Cheers to you both.
I,ve decided just to put the best of our club trips abroad up inbetween the Scottish posts.Its something different and best to do it while I can still remember them.Some are over 20 years ago so if I get any memories slightly wrong....sorry in advance.
bob.
Ps.Read about that Jim.Weather has been pretty dire last few weeks for high level climbing.Supposed to be better for June though.

Great pics Bob with lots of character. On the Old Man of Stoer, I remember Alex announcing that he couldn't swim whilst descending from the summit and therefore had to dash back first on the tyrolean rope to the mainland before the tide filled the channel. I was left to come across last and got a good soaking as the rising tide surged against the Stoer! It was a great day out though and it was good to have such an esteemed official photographer as yourself!
brian

To Brian.
Did you ever get to do the old man of Hoy?