A surprise phone call from Alex who had just seen a good weather window at the last moment prompted this walk last week. He arrived to pick me up, keen to bag a new Corbett near Crianlarich.

'Might be a boring ascent but it will have interesting views.' He assured me. He always says that but in this instance he was spot on. Crack of dawn start as usual. 3 hours sleep for poor me! 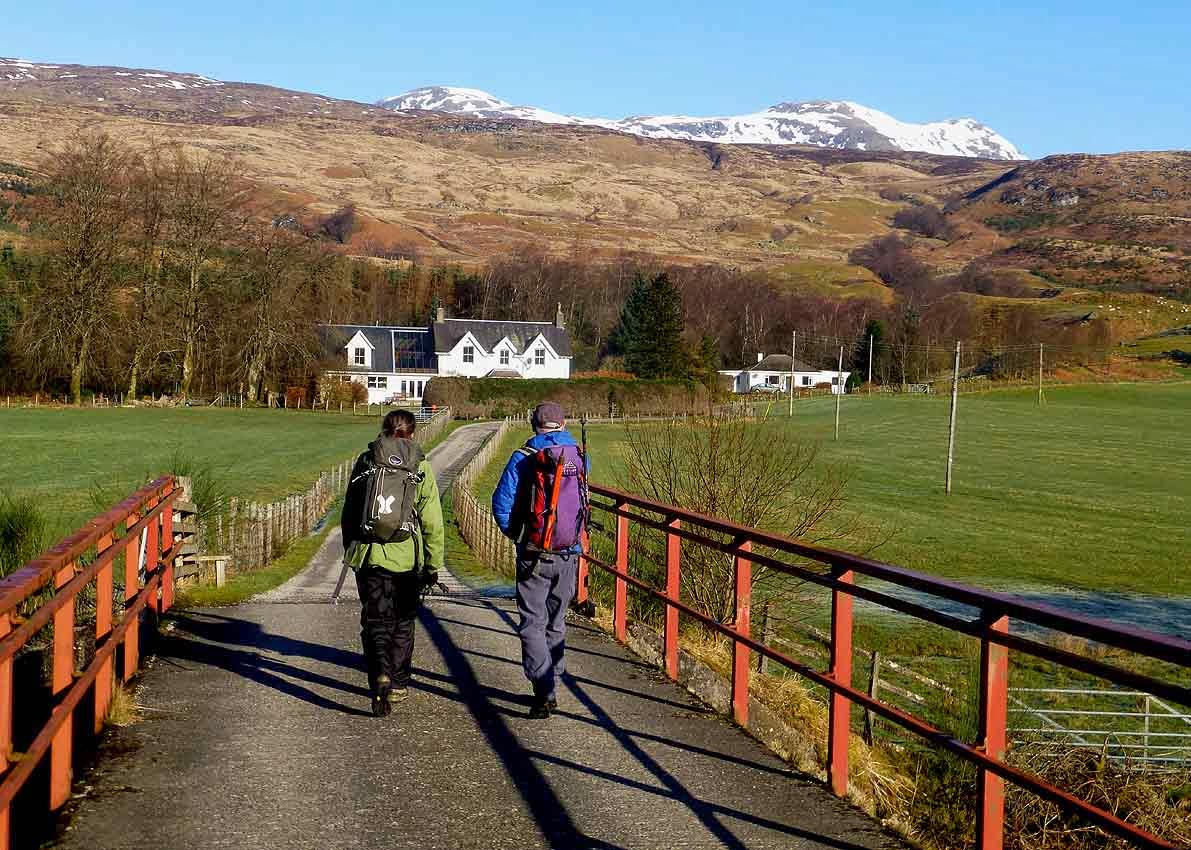 We picked a hitchhiker up who was bagging Munros and had completed an impressive number already. Nancy from Belgium (who was now living in Scotland) and had Meall Glas and Sgiath Chuil in her sights so was delighted at the lift as we were starting at the same place. This is it. The track leading to Auchessan farm where the route to the hills is signposted round the back. Parking is either near the start of this track or at a main road layby a short distance away. 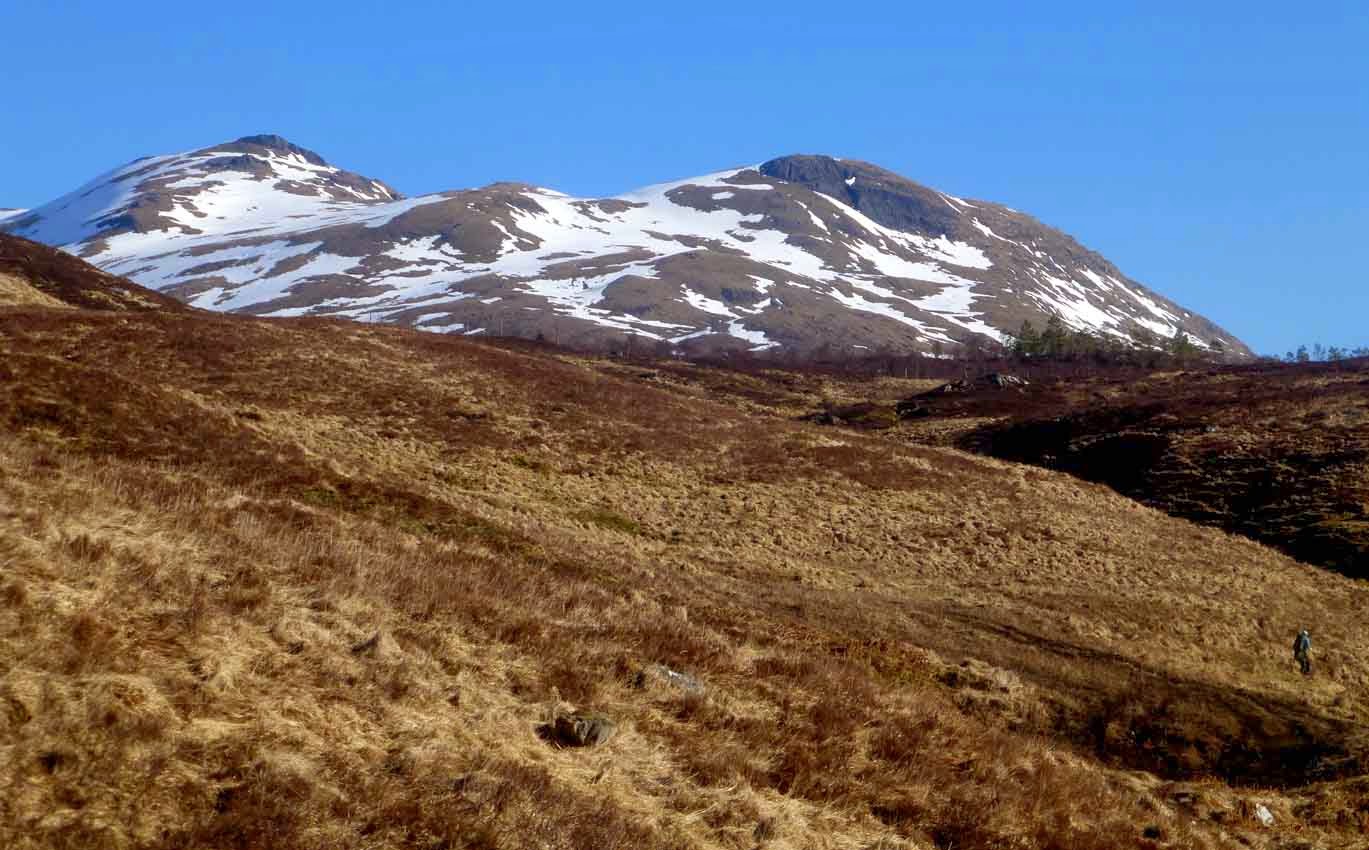 Once past the farm Nancy shot off up her Munro of choice. We would have given her a lift back down Loch Lomondside as well but it was a much longer day for her as she was doing both Munros and the snow was deep on the higher summits. 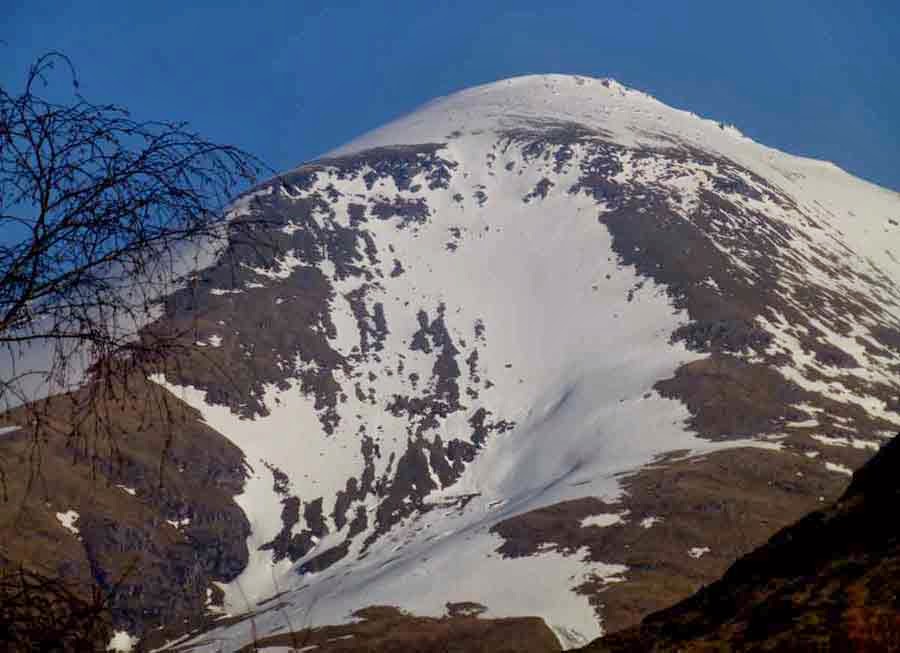 Perfect weather and the hills were looking at their best. A very impressive Ben More which always looks a real monster of a mountain seen from Crianlarich village. 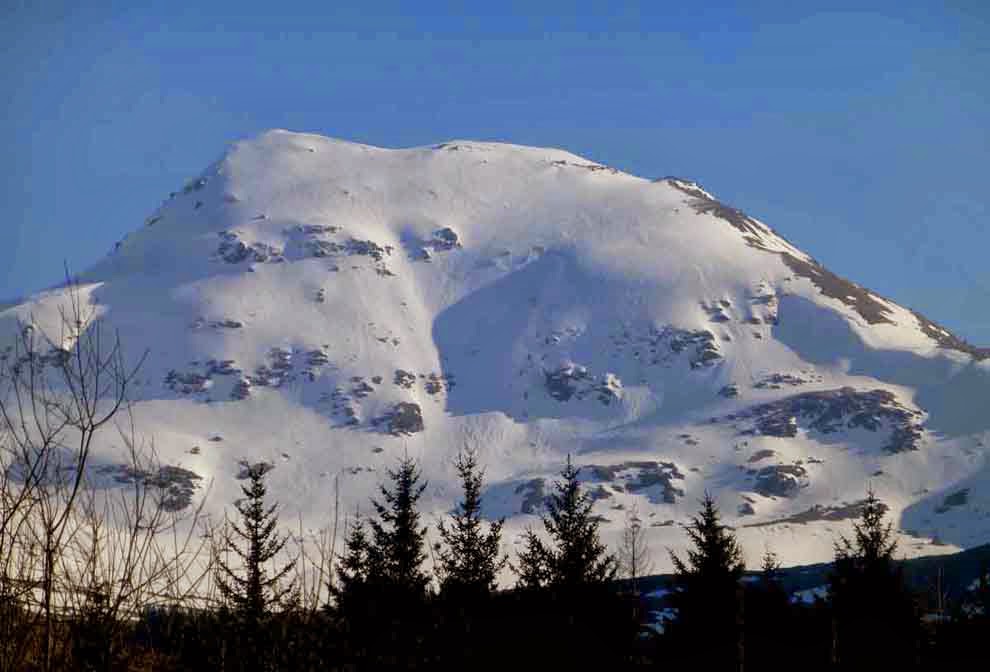 The north face of Cruach Ardrain with Y gully looking like a death trap as the snow was soft and melting fast in the warm sunshine. (I have no idea why the blue sky on some of these pictures looks mottled as I have posted them three times now in different formats and sizes yet on my own computer I can enlarge them to fill the entire screen without a visible blemish in sight- pre post. An annoying mystery.) 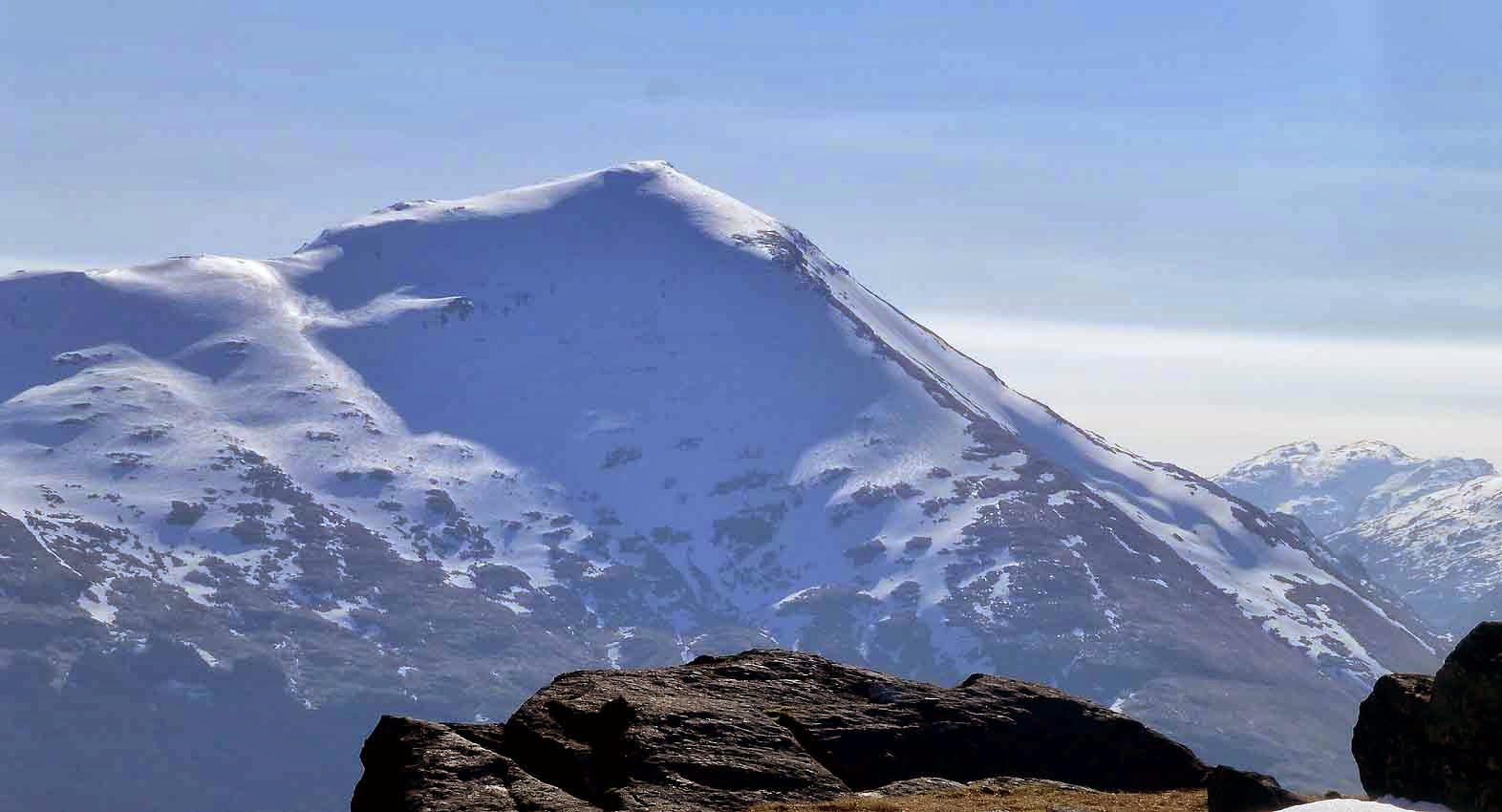 Getting higher up Alex's hill of choice and a different view over towards Ben More.1174 Metres high. 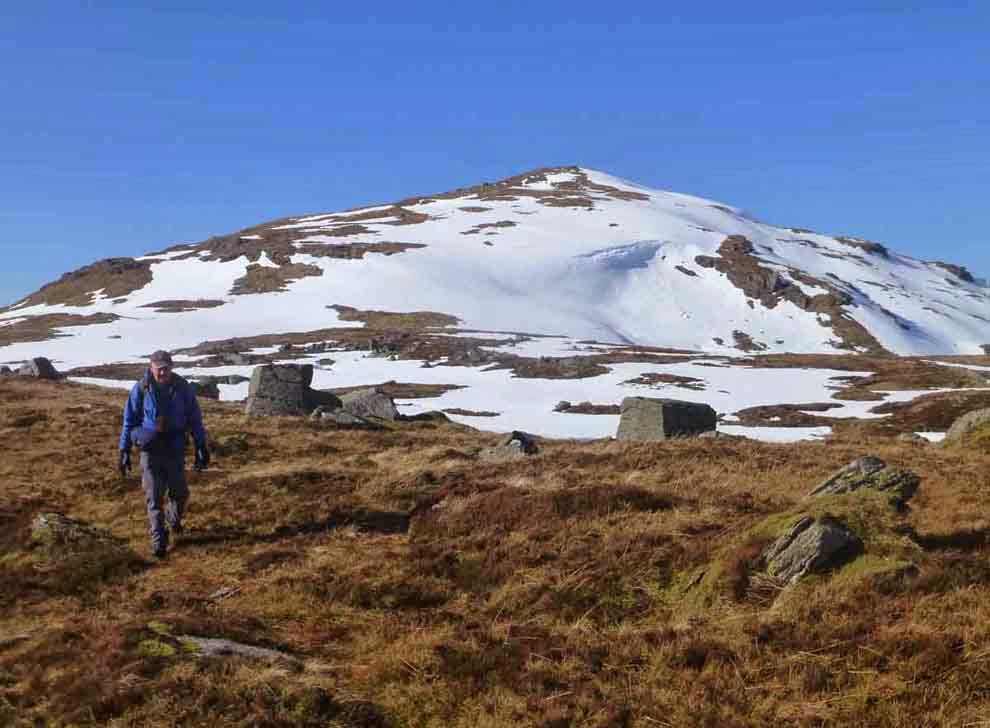 Our hill was not too bad for snow and an easy ascent. On the Munros it would be much harder underfoot as the snow was waist deep in places and looked primed for avalanches. 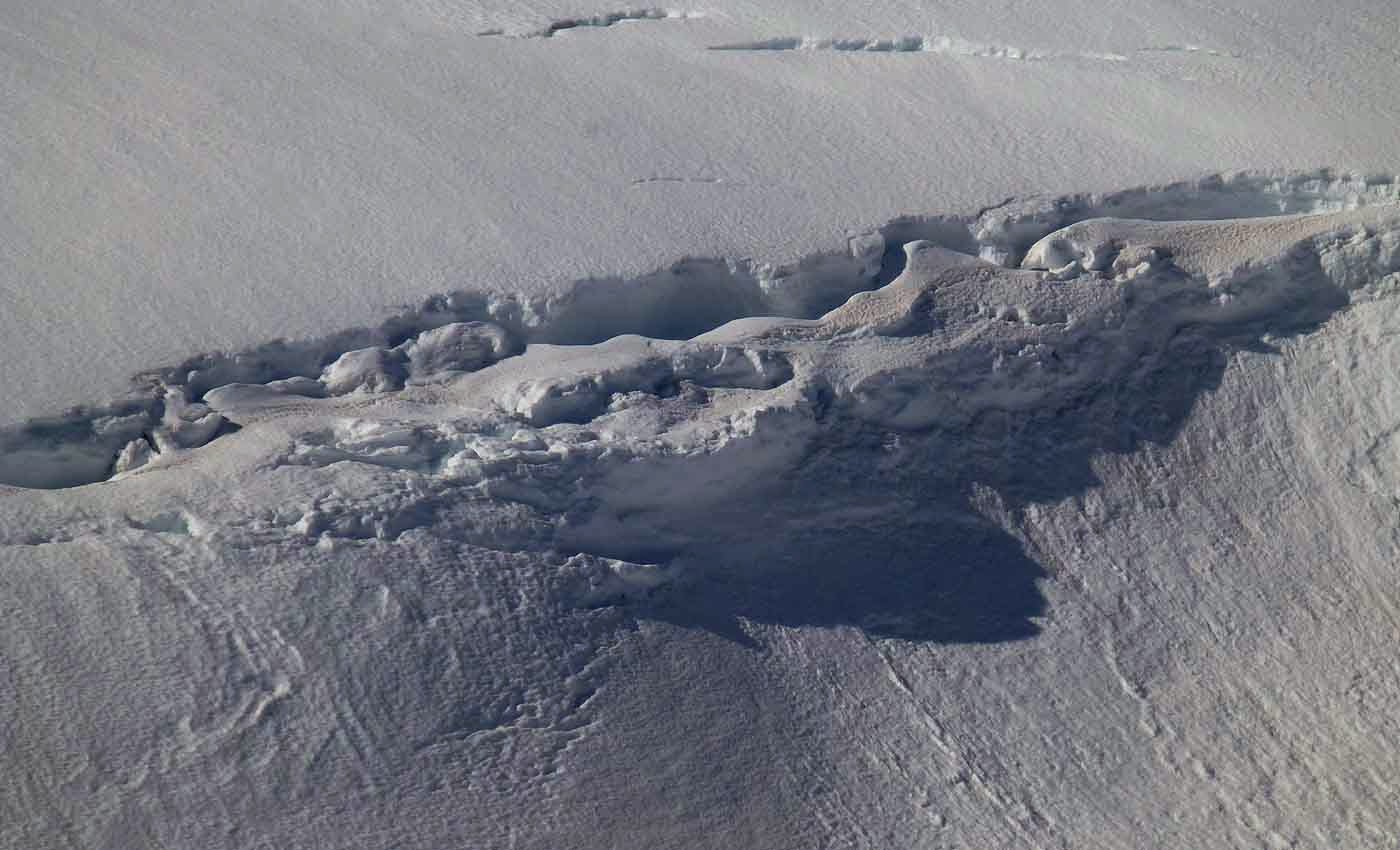 A deep crack just waiting to be triggered into a slide on Beinn Nam Imirean near the summit. 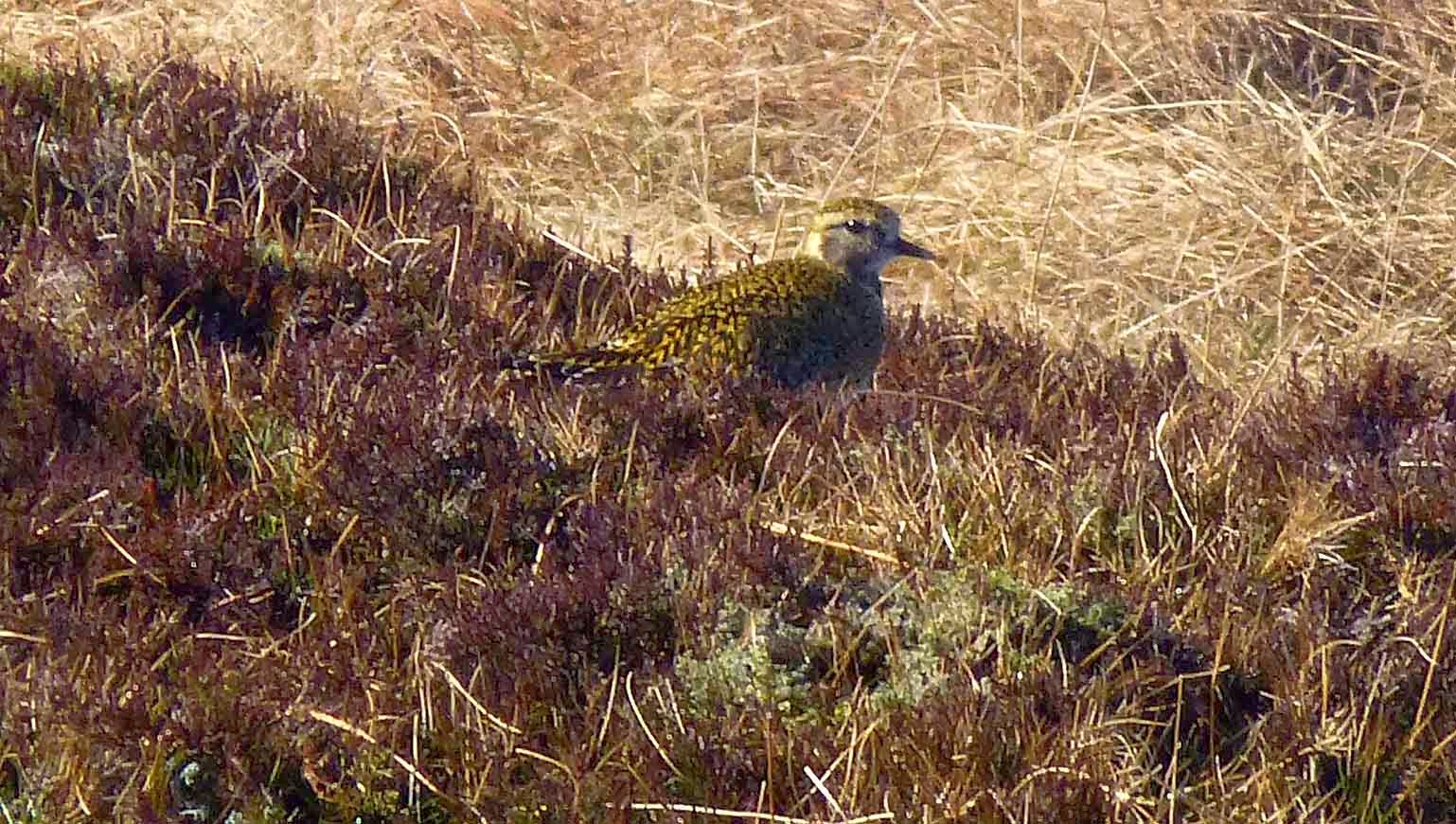 Soft peeps alerted us to what looked like a nesting Golden Plover as the wildlife had already decided it was "Spring" and it was warm even at the summit. If a sudden cold snap returned however these high slopes would be covered in snow again, which looks likely to happen this weekend. Nature is always balanced on a knife edge. 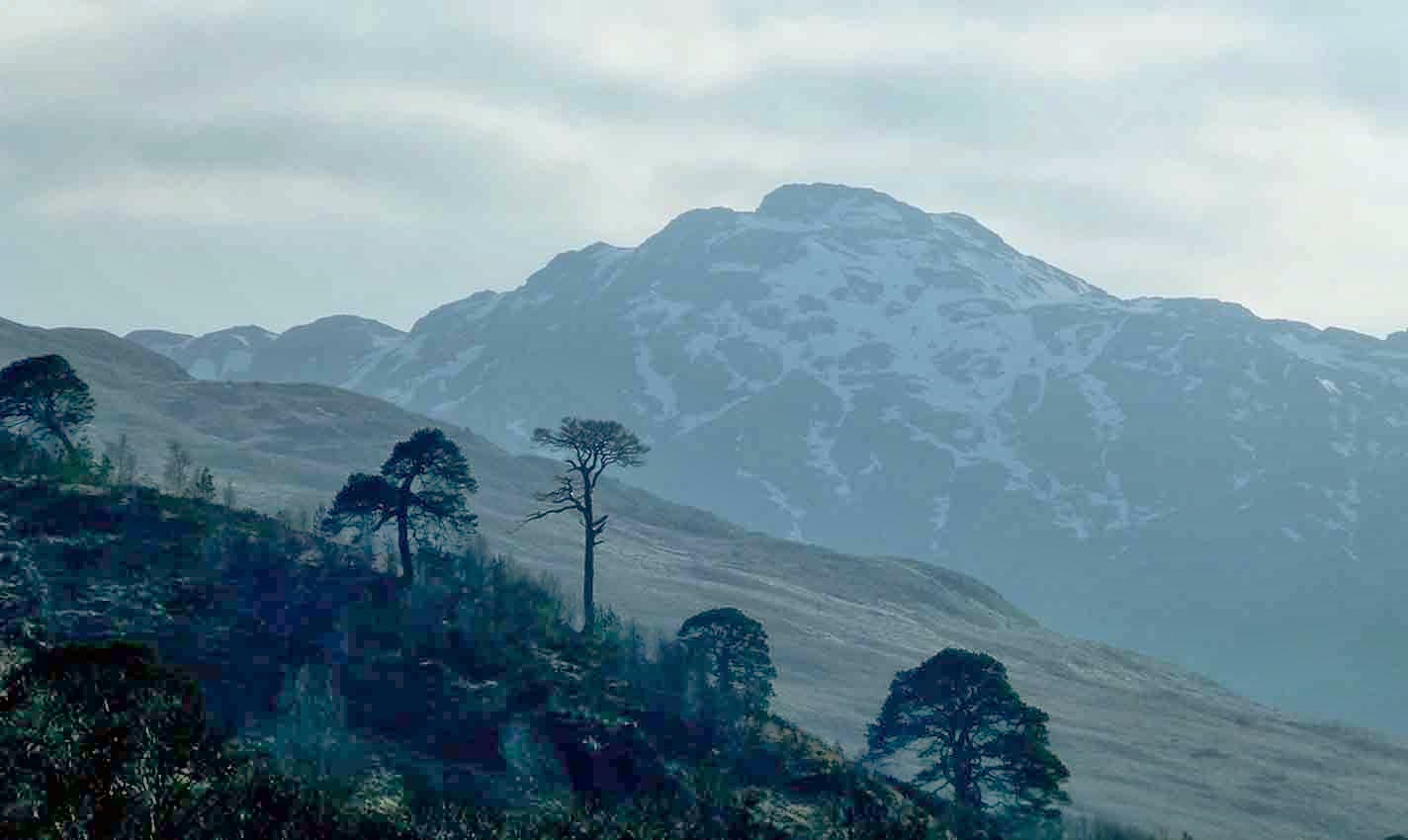 A view down towards the Loch Lomond hills and the Caledonian Pines. 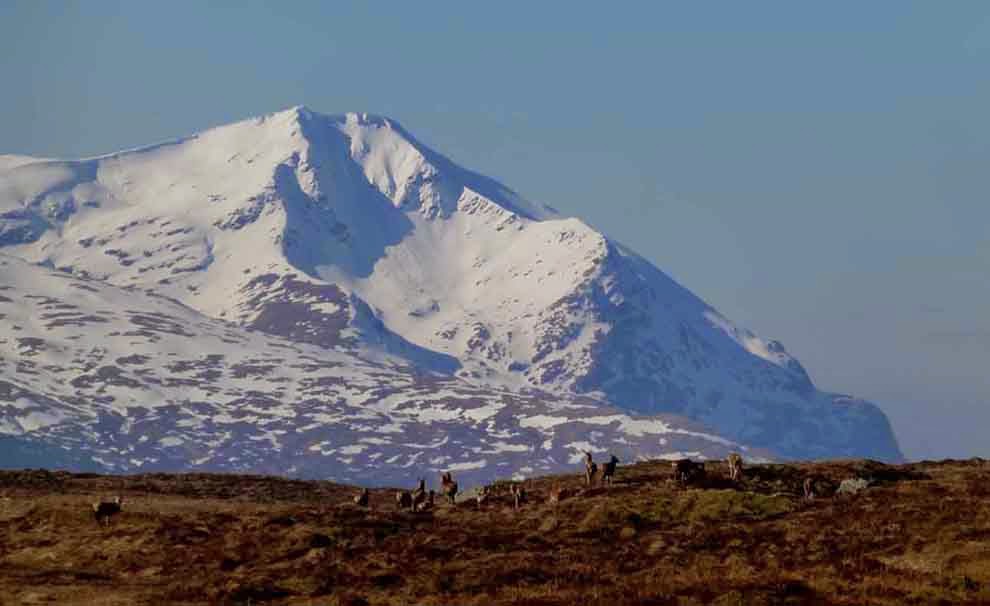 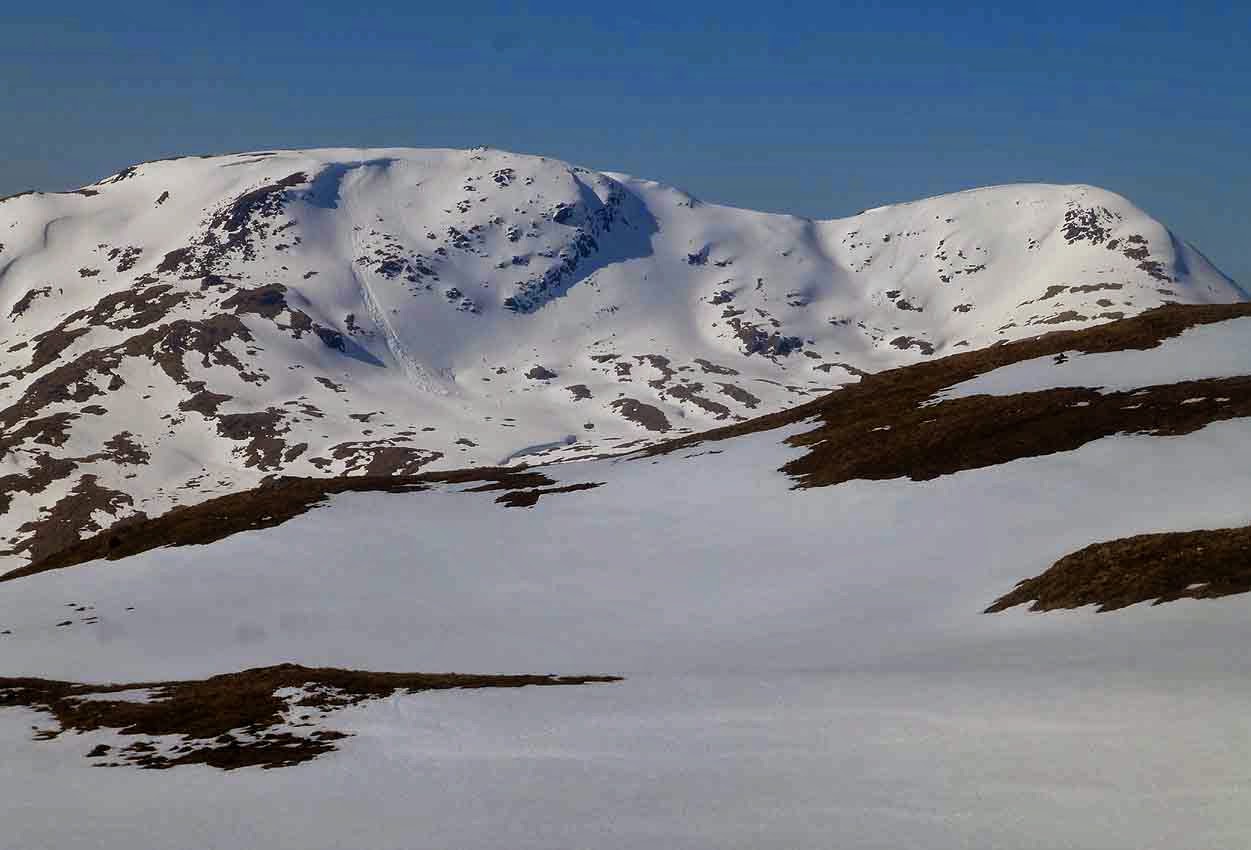 Ben Challum 1025 metres, with the signs of small avalanche debris on its slopes. A lot of mountaineers find blue sky days boring but I love them personally. I like the sun on my back. 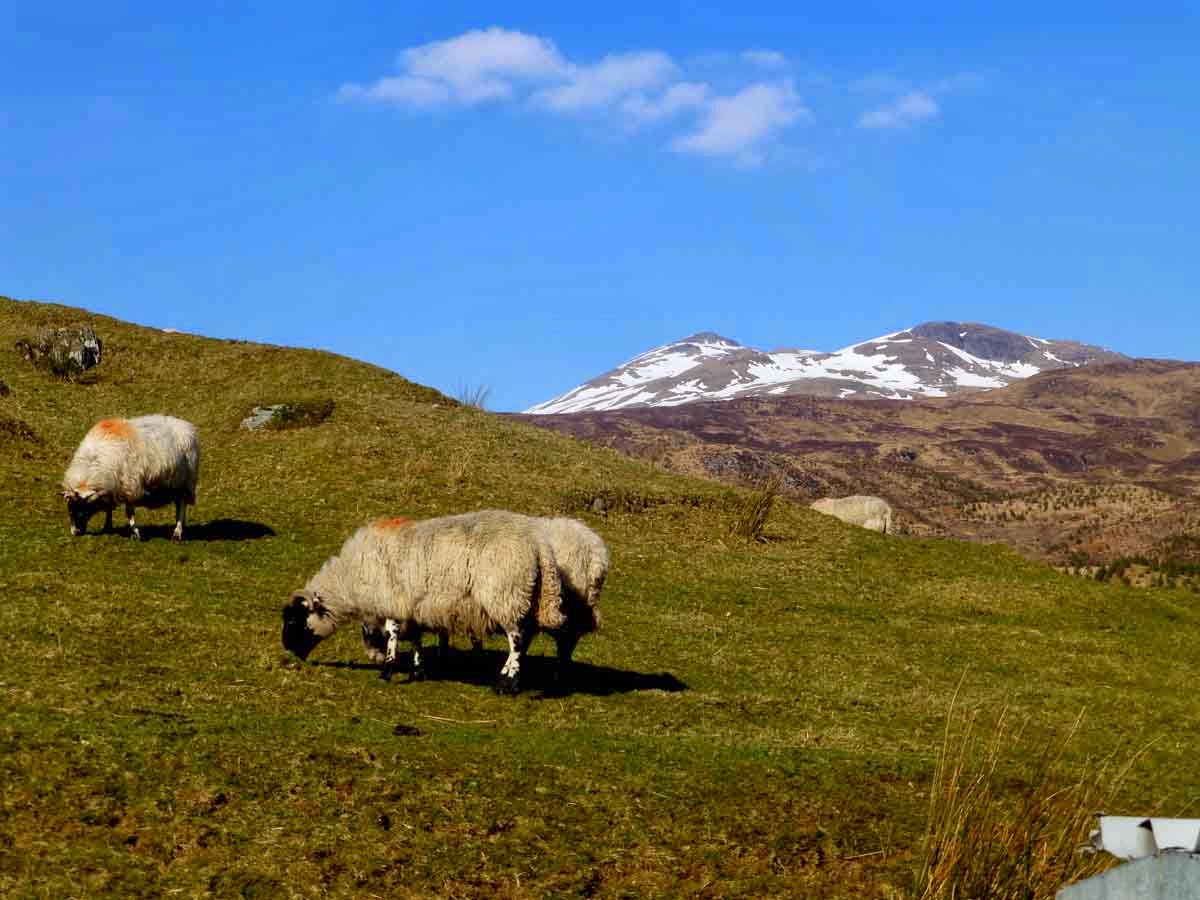 So do the animals. Sheep at the farm on the way down. 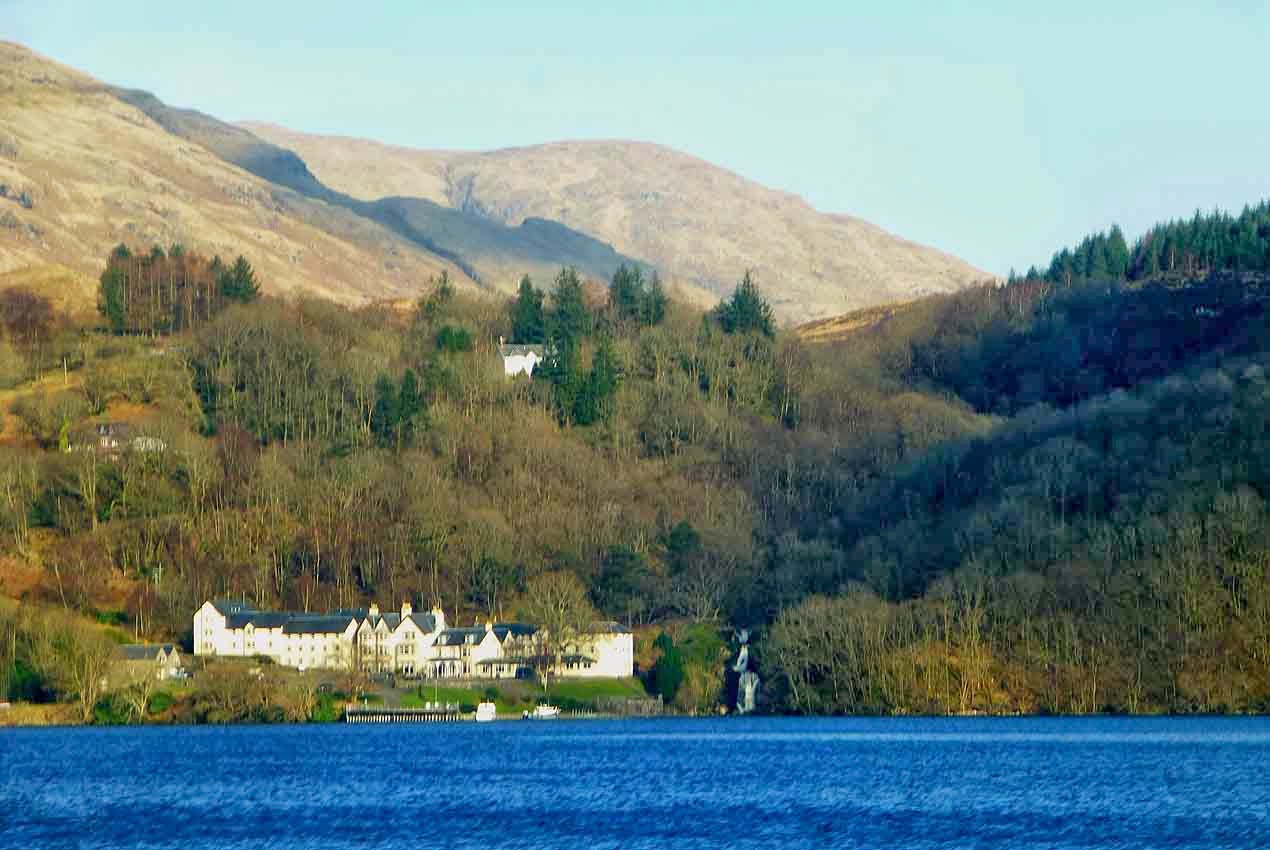 Inversaid and it's waterfall from the Loch Lomond road. Spring at it's finest. Mountain days that come as a complete surprise are the best.
Posted by blueskyscotland at 17:42

Lovely photos there Bob - looks a great day out - just the right amount of snow and looks a nice ascent - and plenty of sun :-)

That crack looks horrendous though - when that goes, it will be awesome and scary!
Carol.

Great pictures again Bob. Love the one with the red deer.
Ben More brings back great memories of a short holiday in the Log Cabins of
Portnellan
You're probably right about the weather this weekend, though I doubt we'll see any snow this far south .

Hello Carol,
We have had another dump of snow over the weekend on the mountains so there's still plenty left.

Cheers Jim,
I'm a bit pissed off about that mottled sky effect in some of the pictures as it's not there at all before I post them on blog. That Ben Lui shot is spectacular viewed full screen on my own computer yet I had to make it much smaller to post it with any clarity.
Golden Plover's eggs are probably history now as a foot of new snow is up there now.

Wow. I love all these photos and I am envious of being able to hike in such beauty!
Oh, and since I saw this post, I have been singing, "You take the high road and I'll take the low road and I'll be in Scotland afore ye..." Am I the only one who thought of this, or the only one to admit to it? :-)

Cheers Kay,
Over in Scotland that's almost a "cringe type" song as we grew up with it on "tartan television" along with the haggis, kilts, bagpipes, and caber tossing- none of which is particularly relevant to modern Scottish life but overseas visitors love it.(Same with deep fried mars bars which most Scots would never dream of eating.)
The kilt and the neat regimented tartans we see today were largely an English invention by London tailors after Queen Victoria made it fashionable to be Scottish again.
The original long plaids the various clans wore before they were banned would not have been so decorative and colourful as good camouflage would be more desirable when fighting or hunting game.
It's a good song though with very sad lyrics as the "low road" is a person who has died abroad and only returns to Scotland as a ghost. Bet you knew all that already :o)

I bet you feel about the Loch Lomond song the way I feel about the banjo song from "Deliverance".
Except for me, I think there is more reason to cringe! They filmed that movie, by the way, very close to my place of birth!
And I must say that Queen Victoria is someone I have always admired, and if she loved Scotland, then she was just showing her good taste!

I was thinking of that film but didn't want to mention it :o) Same thing. Rab C Nesbit is a series here about a Glaswegian character(a drunken bar philosopher and his dysfunctional family) that is more popular in England (London especially) than Scotland as it reinforces the usual stereotype.(Even now most Scots portrayed in British TV soaps are always drunks.Waterloo road is a recent case in point)
Other cringeworthy songs are "I belong to Glasgow" "Donald Where's your trousers?" and "The Northern Lights of old Aberdeen"
Very popular songs worldwide but usually detested by Scots as we are fed up with them being sung back to us since childhood :o)

I can totally understand what you mean. I notice that Americans are almost always the bad guys in a British TV show. Well, it is either an American or a Christian!
(If someone mentions a vicar, I say, "well, I've already figured who the murderer is", and usually I am right!
I have never heard of "Donald, Where's Your Trousers", but the title alone makes me laugh!
And the fact that you didn't make banjo notes to me, shows you are a gentleman!! :-)