The Stob. 752 metres. Braes of Balquhidder.

Another hill on the baggers list to capture last Saturday. The Stob sits in a rough area of undulating empty land between the Crianlarich Munros of Cruach Ardrain and Ben More on one end and Ben Vorlich above Loch Earn on the other. This was part of Rob Roy Macgregor's territory back in the day and he lies buried here in a modest plot in nearby Balquhidder. Maps 57 Stirling and 51 Loch Tay cover this area.
http://www.rampantscotland.com/famous/blfamrobroy.htm 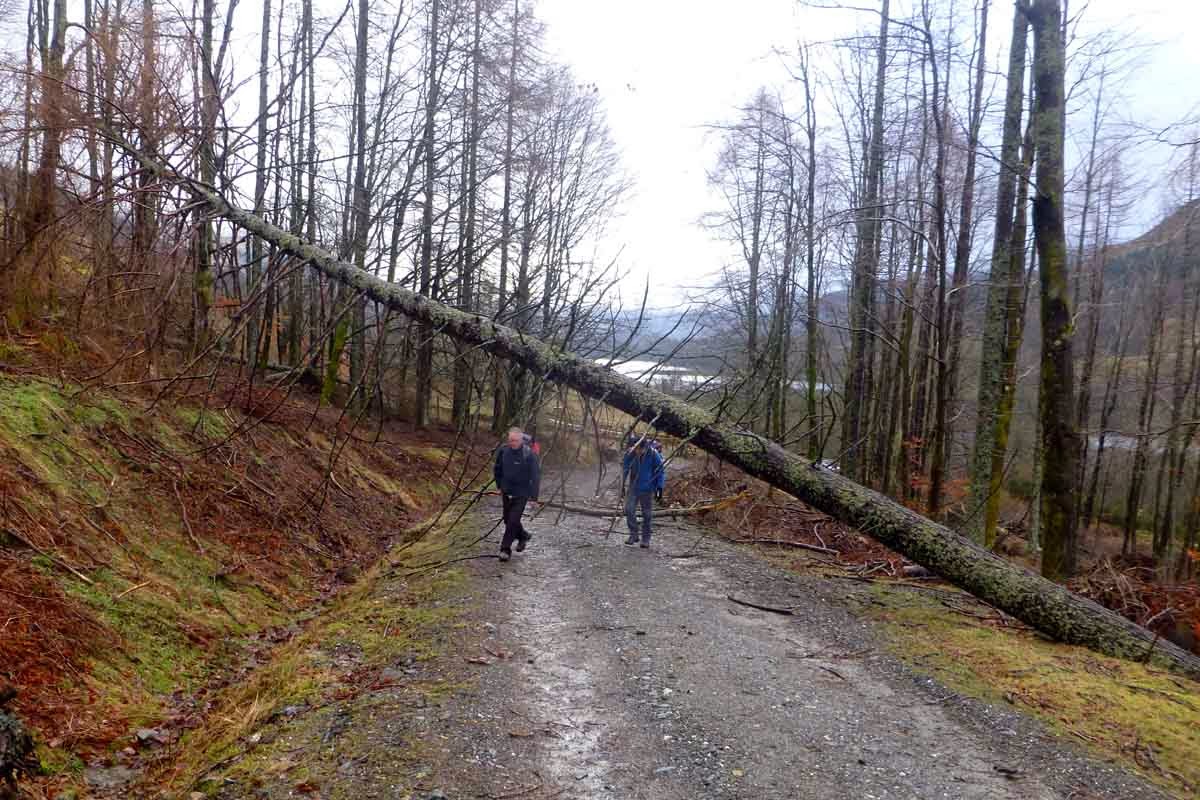 All Pictures Click Full Size
We parked near Tulloch where a small car park and forestry road leads up towards the Stob. Although they may be called the Braes of Balquhidder that usually denotes rough but easy hills, usually near a population centre. Braes are trustworthy hills with a friendly,grassy feel to the name normally, whereas these have a more dramatic edge with numerous large cliffs, gullies and a bleak, remote atmosphere to them. In mid winter conditions they do not feel forgiving in any way and we never spotted any other humans on our walk over the hills...or deer or sheep....just two ravens. 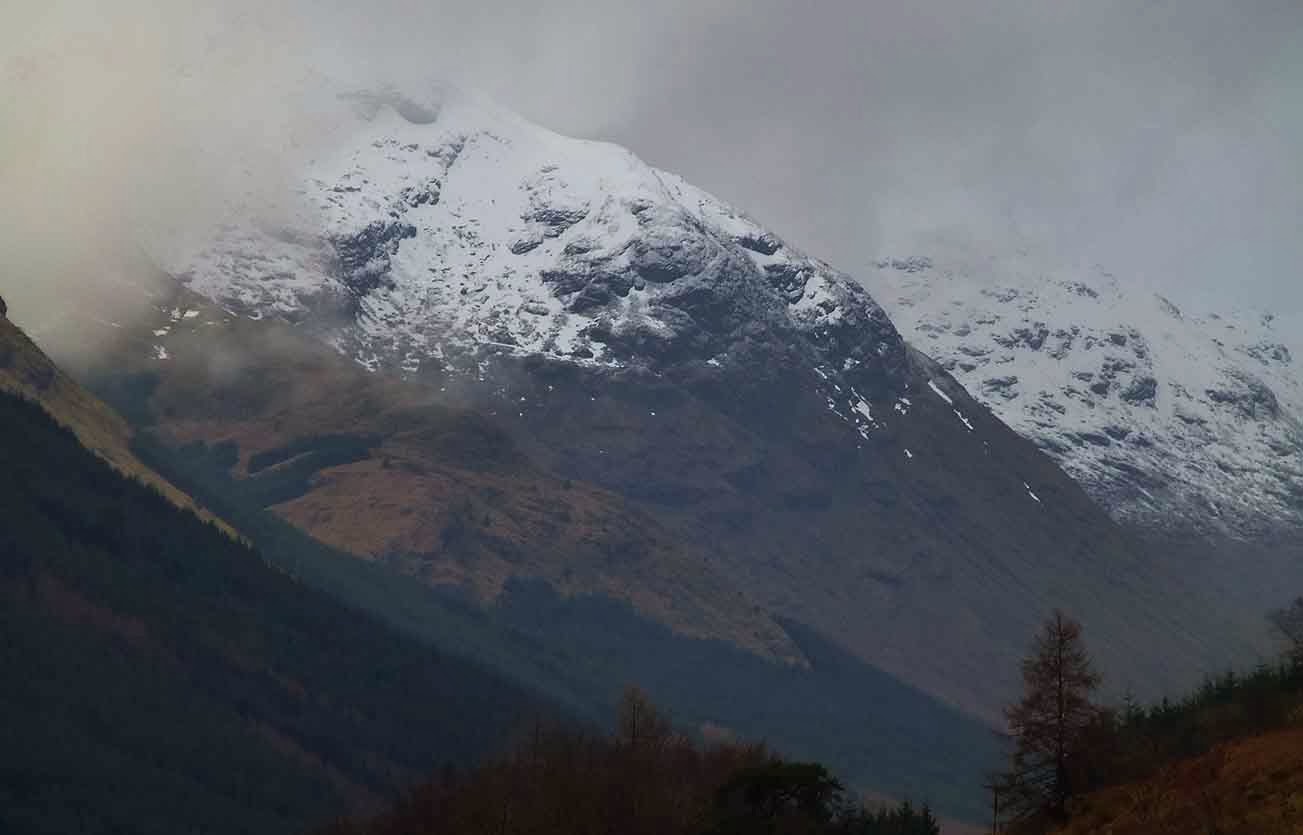 Looking across Loch Voil towards Creag Mhor and Ceann na Baintighearna. There seemed to be a fair dump of snow on these hills when we arrived and conditions higher up looked a bit wild but it was an improving forecast so we headed off. 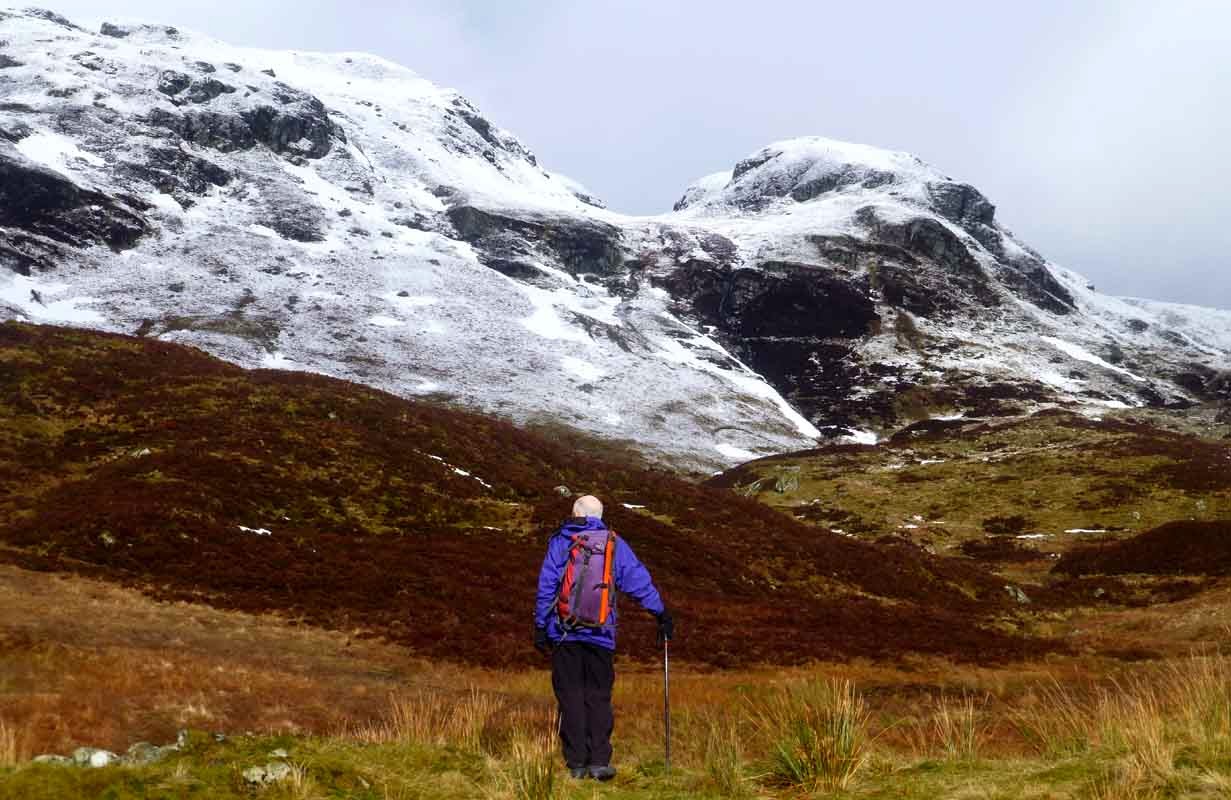 The easiest way up seemed to be to follow the track until it climbed out the forest then over a stile (or through an unlocked gate) which allowed access onto the open pastures. We made for this notch near the bottom of the ridge. We, being Myself, Alex, Graeme, Alan and David. Seen here below. 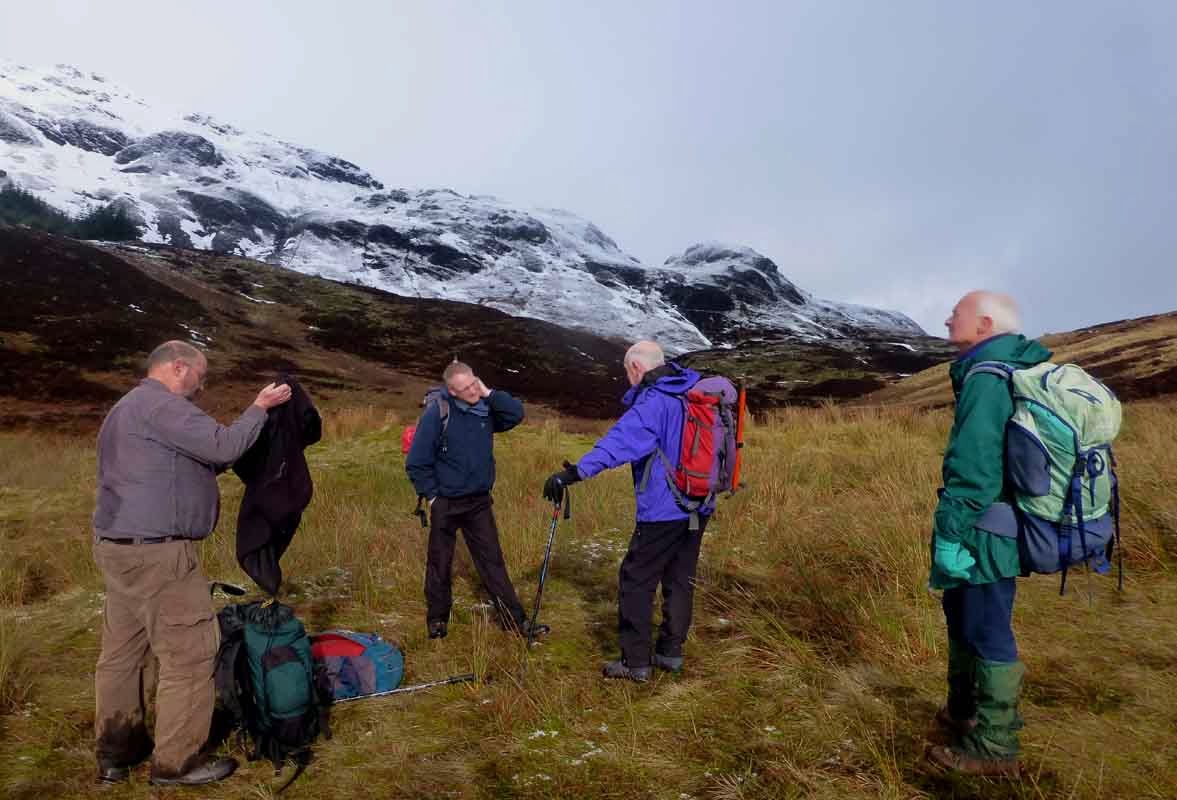 It was a good way up and not too hard on the body as wading through deep soft snow right from the off is very draining. 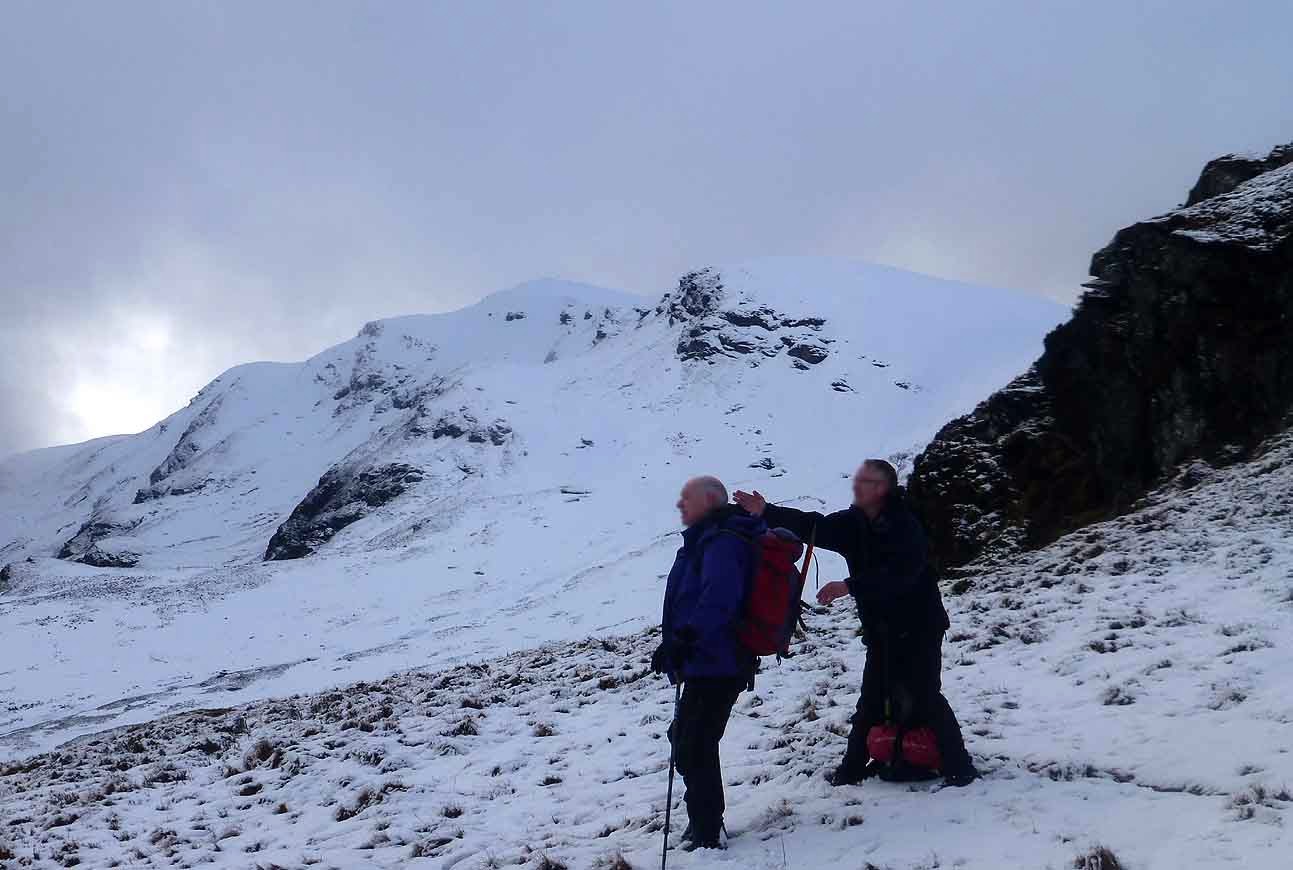 Alan pointing out some interesting feature to Alex, halfway up the hill. 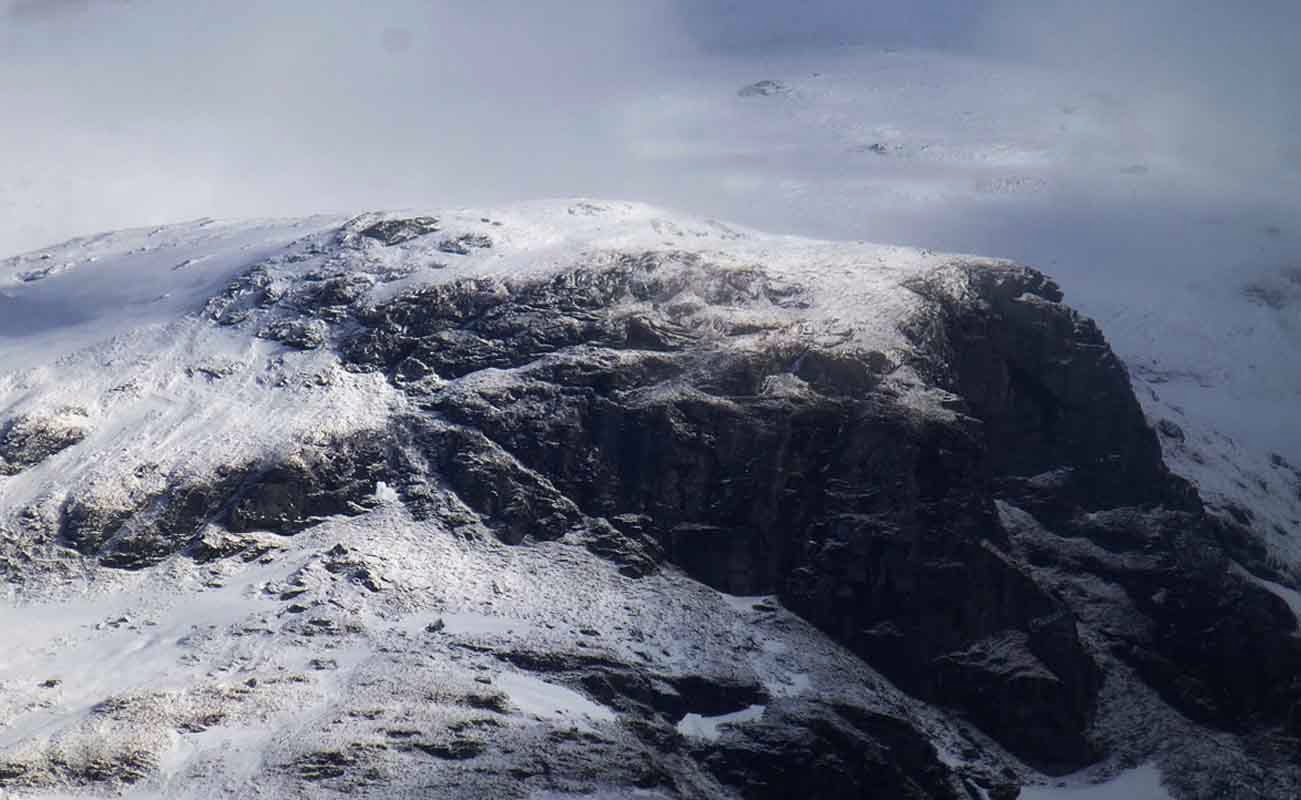 Looking over in the direction of Meall an Fhiodhain and Creag MacRanaich, some of the other nearby "Braes." The light and shade over the area was very dramatic throughout the day as fierce snow squalls followed by sunlit patches dappled the heights. 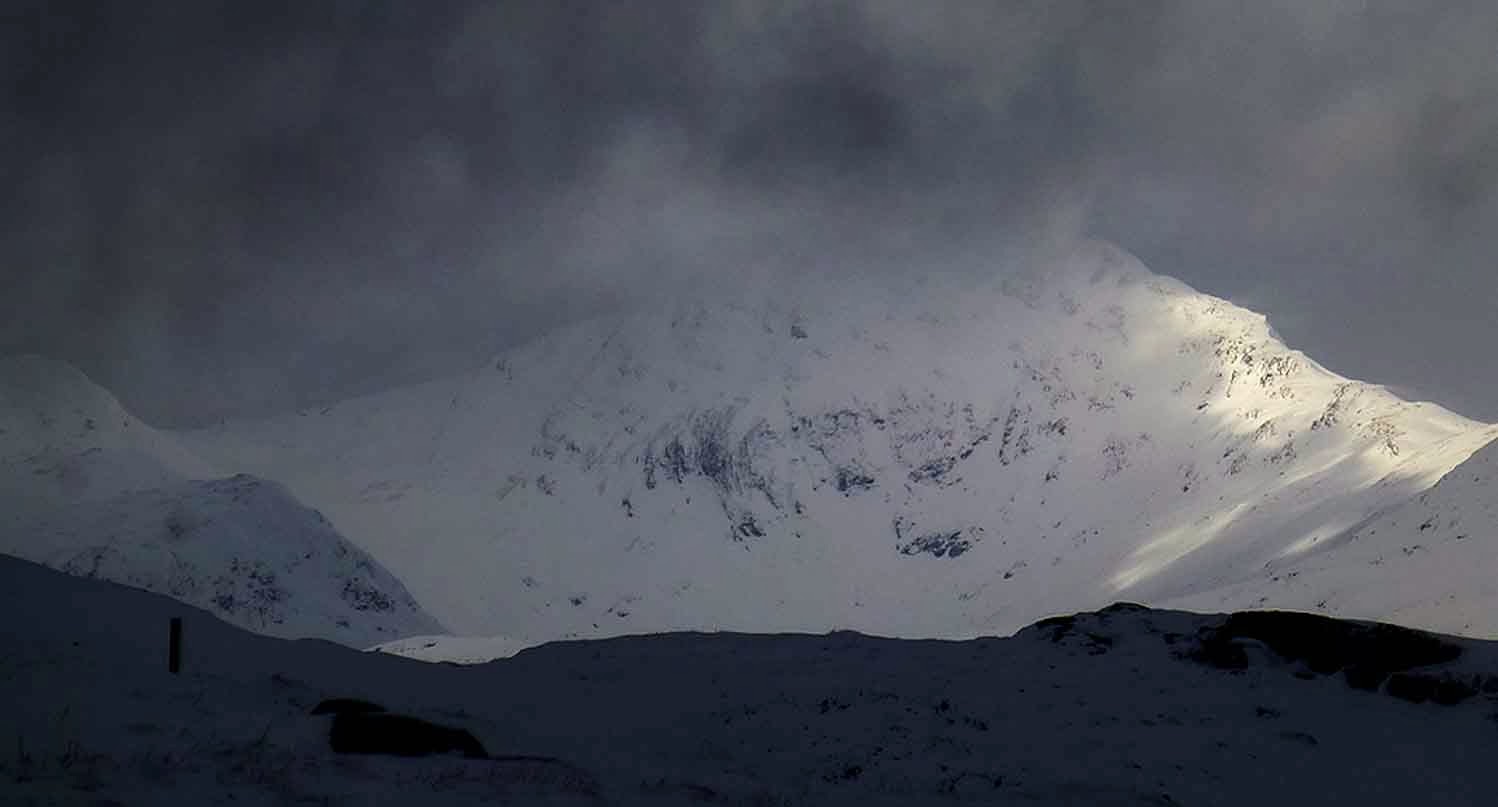 One zoom of another peak in the district just glimpsed soaring upwards in a moment of bright sunshine before it disappeared again under dark clouds. Conditions underfoot were starting to get tricky here. No need for crampons as the snow was soft --- knee to waist deep in places. Several times we fell down a hole into an invisible burn running below as the snow was so deep you couldn't tell where they were half the time. 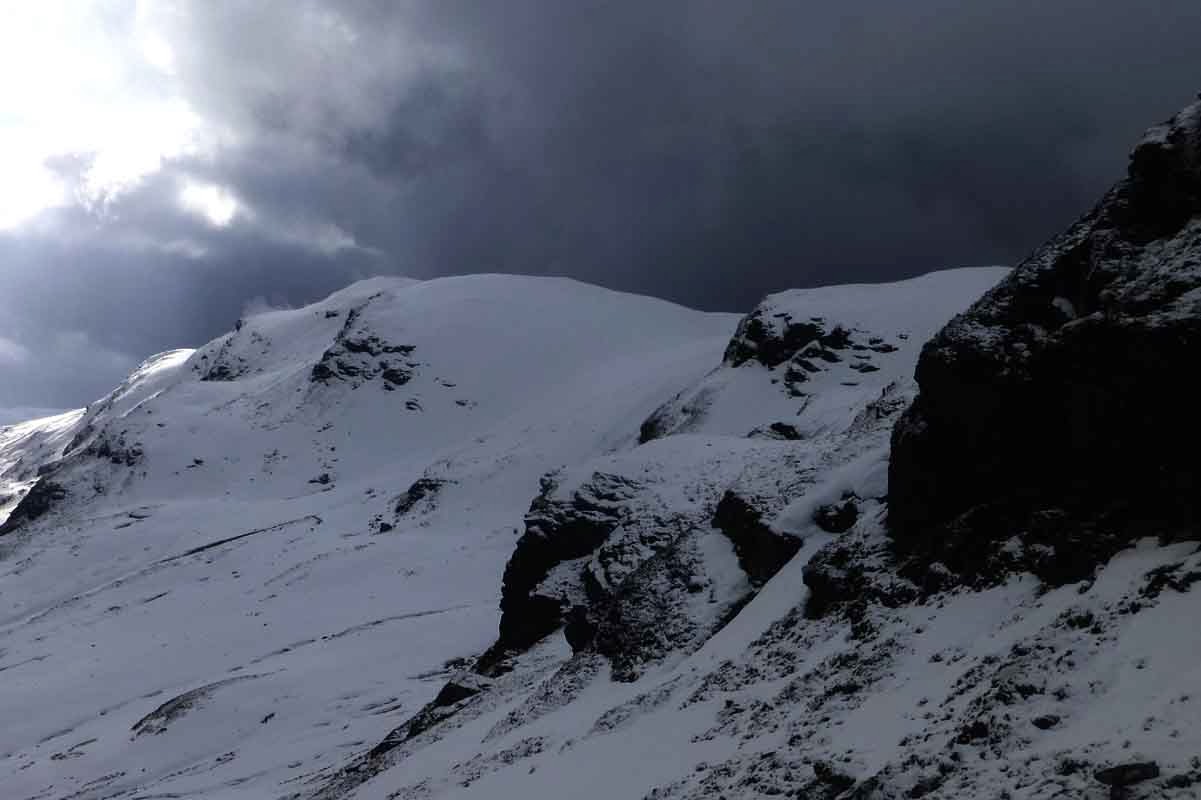 A view of the summit ridge heading in the direction of Loch Voil. I noted the spindrift flying off the cornice--- always a sure sign of a howling gale once on the ridgeline and so it proved. 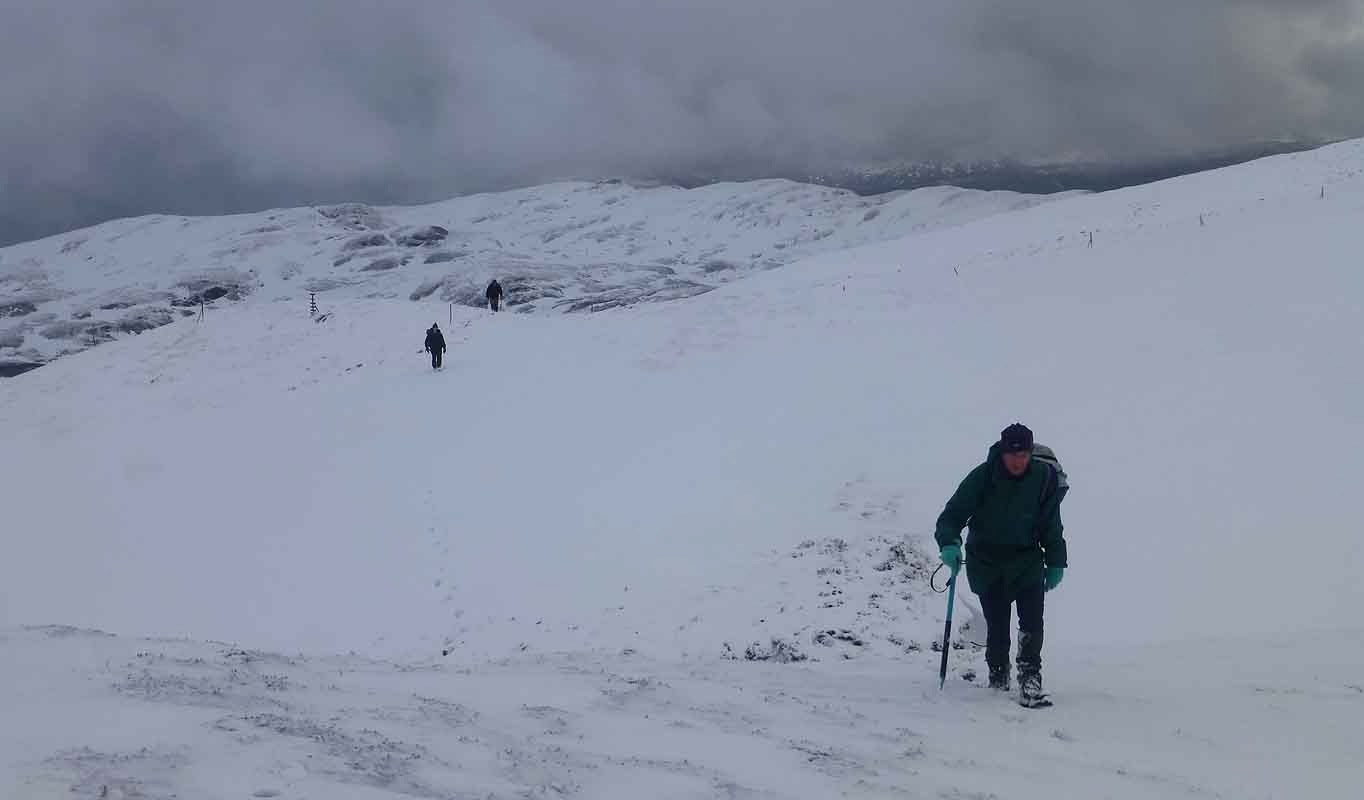 Getting a bit higher. 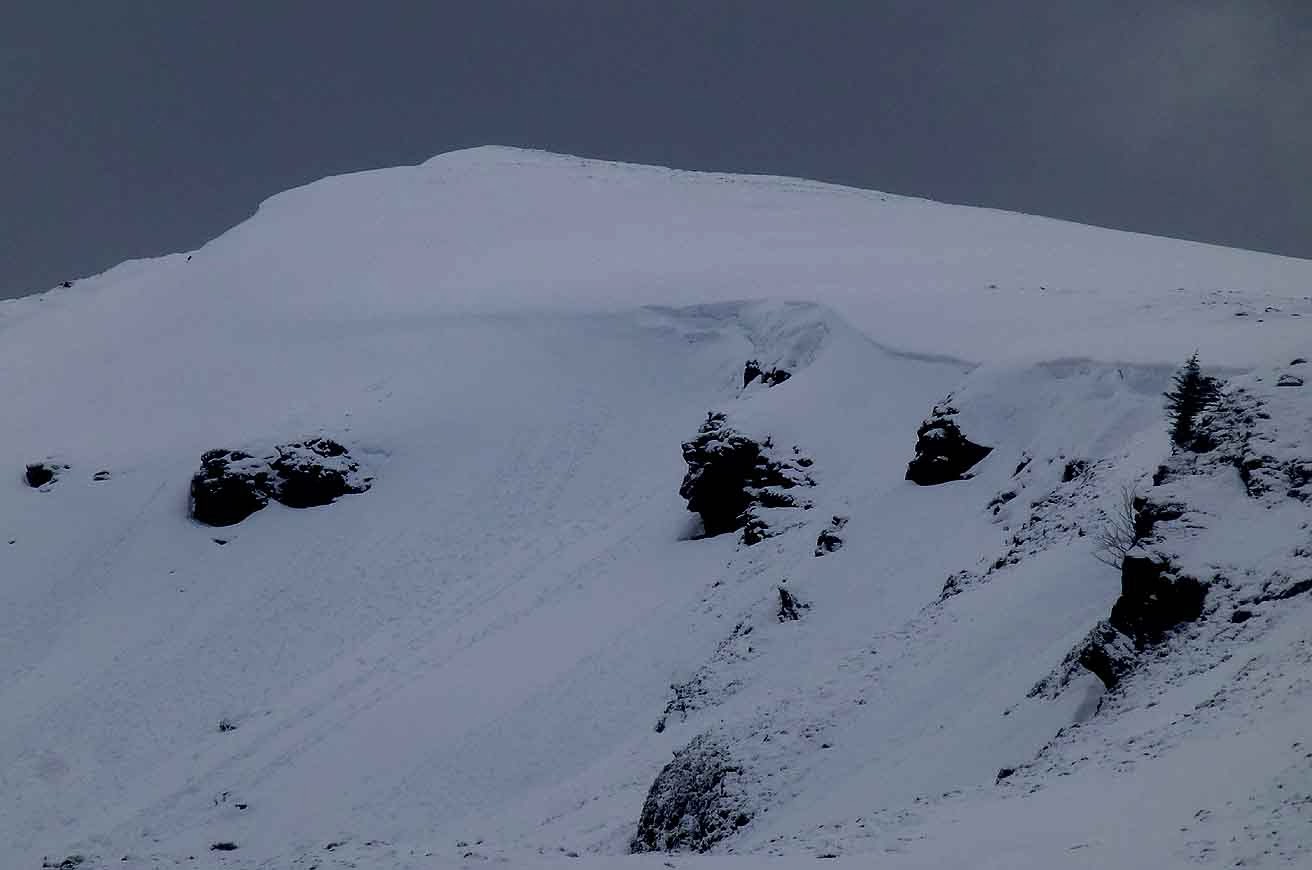 A zoom of the soft cornice ready to slide off into the glen below. 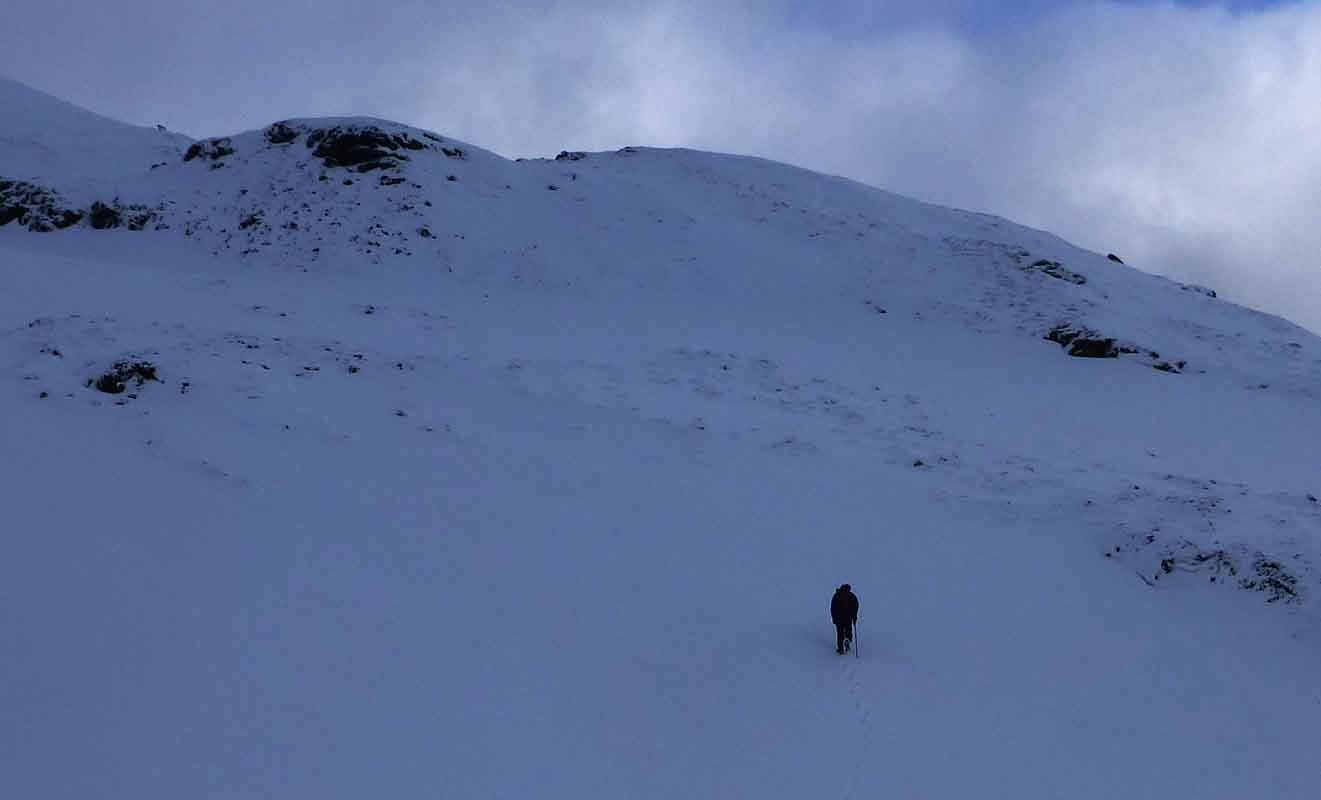 Alex heading upwards. No burns running here. This is near the summit. Although sheltered all the way up it was so cold on top of this exposed ridge that after reaching the summit everyone decided to bail back out the way they had arrived, leaving Alex ( who had wanted to walk back to the car along the ridgeline ) to find his own way back. After a few disbelieving howls when he saw us scampering off he reluctantly gave up that idea and returned to the fold. Being damp by now under soft melting snowdrifts my feet and hands (although encased in gloves and boots) remained frozen until we got back onto open grassland again so I made the right choice for me personally. The coldest hill day by far this winter we have experienced yet and a real blast from the arctic- windwise. 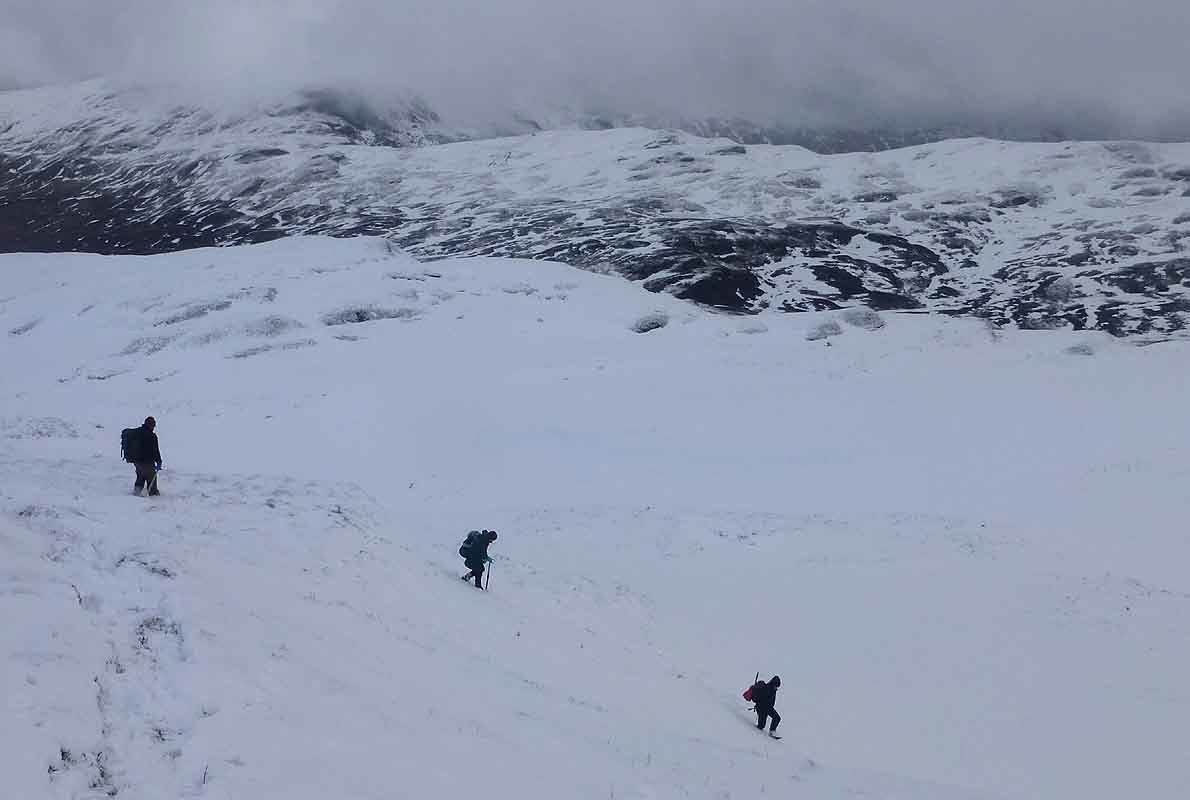 Descending again, following our own footsteps down the ridge. 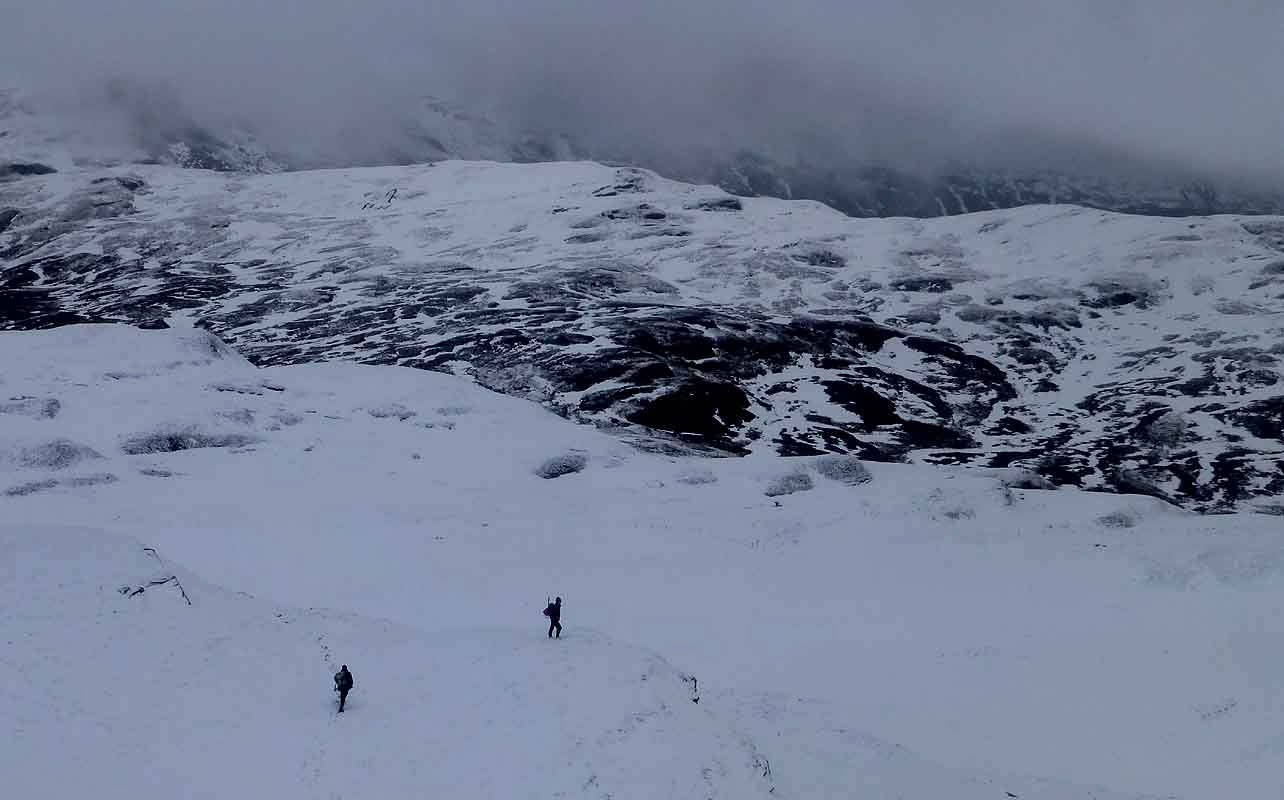 Further down, standing just above a band of hidden cliffs, then the main trench leading to lower snow free ground. Good to have a full carload to break trail. 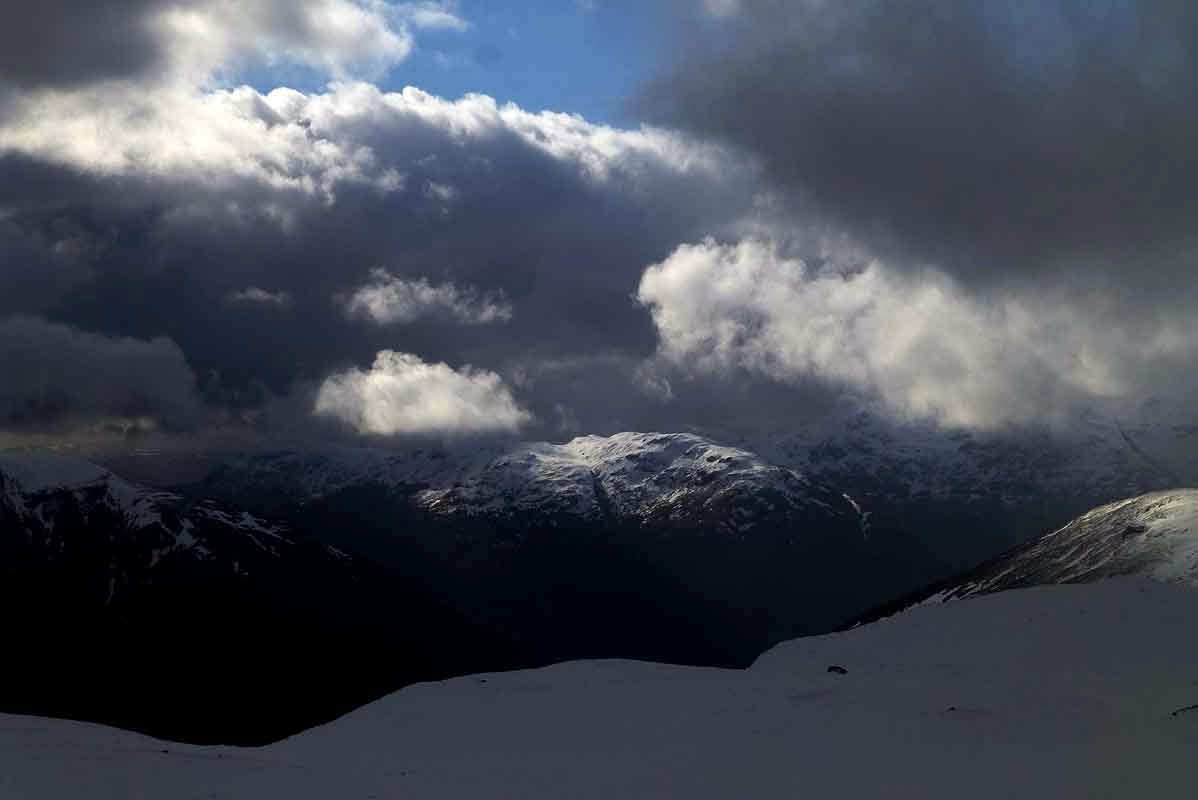 Atmospheric light to end the day. We stopped off at the Kings House Hotel just off the A84 to find out it seemed to have been taken over and revamped since the last time we paid a visit. It was now called Mhor 84 and seemed to be catering for a different class of customer altogether. As I can cook and enjoy my own meals every time I rarely eat out in restaurants so it was never going to appeal to me. It was very busy with passing car traffic though and is on the Rob Roy Way and cycle route 7.
Maybe it's just me that thinks a slice of home made cake for £8 and a miniature glass coke bottle for £2 is a bit steep yet it's listed here as a good budget hotel. I can buy an entire and very tasty cherry cake or large apple pie out of my local supermarket for £1 .. and often have. Also four litres of coke for £2 (on offer every few weeks) which would have filled that miniature bottle 20 times over at least so I didn't buy the cake obviously. Mhor 84 seems to be trying to cater for a variety of customers- from hill walkers, to passing motorists to upmarket clientele but the place just left me feeling despondent. The old hotel was never a favourite spot anyway but is this high end establishment the only way forward for pubs and restaurants these days? Someone must think £8 is good value for a portion or else they wouldn't sell it.
http://mhor.net/mhor84-motel/ 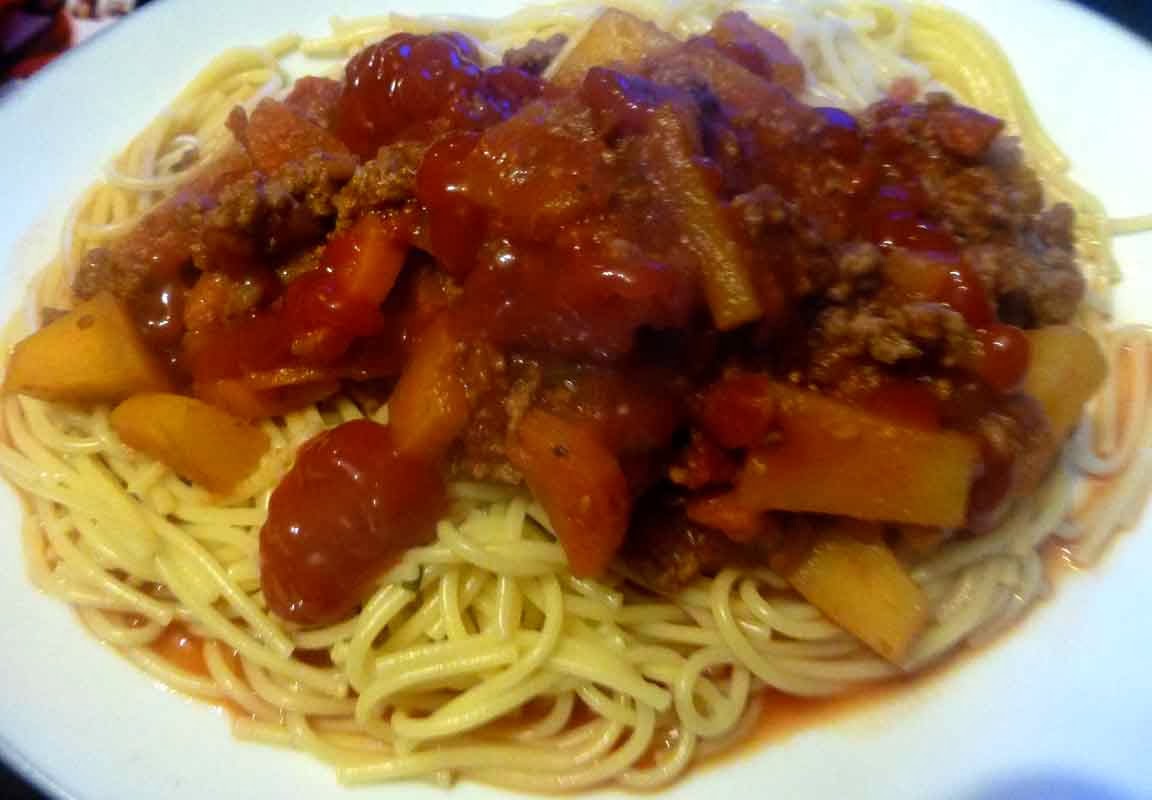 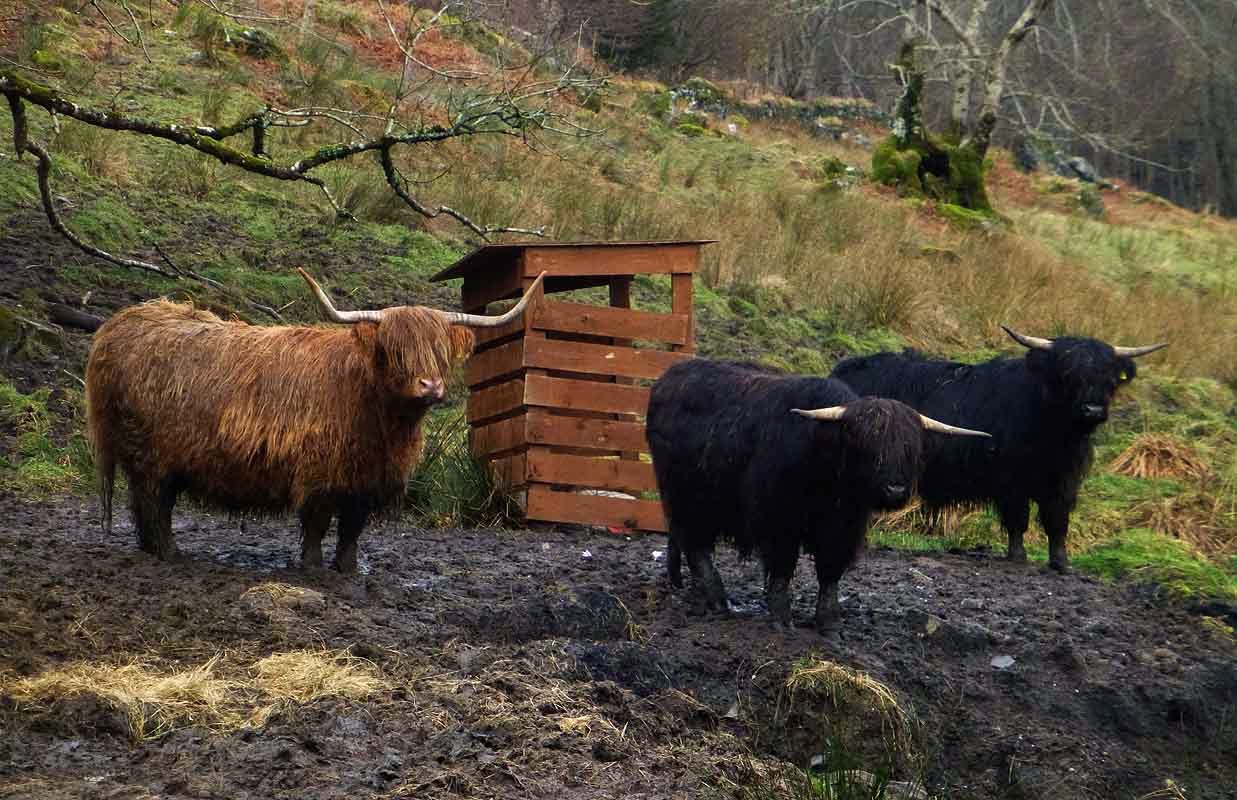 On a completely different subject this influential cult film has cheered me up on several occasions over the years since it first came out. It is only a fantasy, but somehow it inspires and brightens up the darkest of days for me. Do not try this at home children. Playing with fireworks can be dangerous unless it's at a carefully supervised event with the right level of adult participation. :o)

and then the main meal is served. My kind of restaurant and value for money service. This is a film based on a imagined dystopian right wing totalitarian society of course but the words somehow ring true and who knows what the next 30 to 40 years have in store for us all. Life can be full of surprises at times :o)

Different conditions to when I did this hill last spring Bob. I enjoyed it, especially the fine views of Ben More and Stobinian. Surprised at the amount of snow; I haven't been up north this year yet. But warmer weather looks to be on the way so no doubt heavy snow melt. So I'm heading south tomorrow to the fringes of the Lakes for a couple of days, no snow down there.

A good stiff climb by the sound of it Bob. You got some great pictures as usual. Poor Alex, not letting him have his way. You probably did him a favour. On one of our Mountains of Mourne walks both me and Shorty wanted to go on, but were outvoted. Shortly afterwards the storm struck.
I've probably mentioned this before, but my late aunt believed that our borders family traded sheep for cattle along the reivers route back around old Rob's time. Must admit I had tears in my eyes when I visited his grave a few years back.

With regards to your speaking politically, keep it up. My views used to go weekly to the Scunthorpe Evening Telegraph till I moved back home. I haven't written to a paper since. I'm either content, apathetic or too old to bother anymore.
Cheers Bob

Prices in that caff are pretty damn steep aren't they! :-o I'd never pay that much for some cake and I don't drink coke anyway. I was a bit upset to be drinking tonic water the other night in the pub and paying £1.80 for a small bottle when half a pint of real ale was selling for £1.60 - the real ale, of course, pays duty to the government on it - the tonic certainly doesn't so why so much? I severely limited how many drinks I had that night and stuck to just 2! :-(

That looked a pretty tough day but I do like those dark, dramatic skies in your photos.
Carol.

There's a huge dump of snow in the Highlands at the moment Neil but as you say it will probably melt fast with the mild run of weather recently. It's a good hill. Best of Luck for the Lakes but there are so many great things to do down there anyway even if its overcast.I love the history, the villages, quarries and caves down there.

Enjoyed that hill Jim. It felt like real winter conditions underfoot for the first time this year.Rob Roy was a product of his time as well I suppose- forced to bend the rules in order that his family and folk depending on him survived during a harsh regime.

I'm giving up political comments from now on as I've said all I wanted to say on the subject and folk just think you are a nutter if you rant on about what annoys you too much.

Spot on Carol as the ales and beers didn't seem to be expensive when compared to soft drinks and cakes in the place. The cakes did look nice but I wouldn't pay that kind of money on principle. No wonder we don't visit many pubs these days after a hill walk. :o)
Are you suggesting I should go out in poor conditions more often just to capture dark, dramatic skies? Dream on...that's never going to happen :o)