Break out the cigars folks. Me`s a proud daddy!
Now that the last fish has died in my humble back garden pond (after me bringing in the last two survivors indoors to nurse through the winter) a lowly amphibian has spermed magnificently all over the place leaving an abundant cluster of jelly eggs in the water.Ha, Alex! If this was a card game I think you`ll find 200 webbed legged little youngsters beats a couple of bouncing bunnies
any day of the week.
I look forward to teaching them the facts of life once someone teaches them to me .(Sigh, yours truly has been celibate longer than that well known celebrator himself Sir Cliff Richard.)
Anyway I digress somewhat.We decided to go to the Cleish Hills today.We`d looked down on them several times from other higher hill groups and although they didn`t look like much had heard they were in fact delightful little hills, wild and empty with smashing views.
We parked at the deserted car park beside Dowhill Muir,the only car there,got out and walked along the landrover track to Loch Glow.
"I`ve read this is popular with fishermen sometimes." says Alex."Maybe its too early for them." 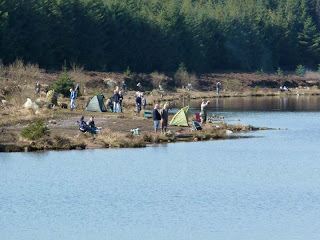 Although it was a cracking day ,the warmest of the year so far,we were slightly shocked by the numbers involved.They really do like their fishing in Fife.It was a good going concern obviously and we soon found out where the missing cars were.Right beside the loch of course.With all their tackle to carry, 12 pack cans of beer,tents,bivi hoops and umbrellas they had to be close to the water. 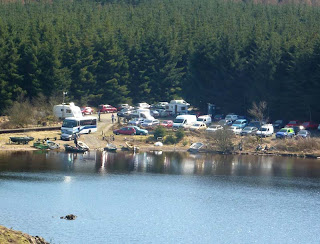 It felt a bit like Blackpool pleasure beach,not that I`ve ever been there. 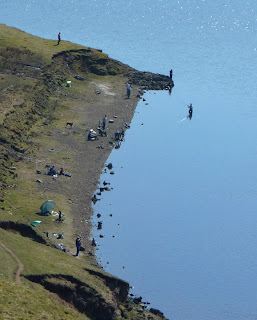 We spotted a big fish getting caught round about here but it slipped off the hook inches from the keep net when he lifted it out the water and was away in an instant.Aw shame.He took it well though.
Alex was a bit peeved by all this activity.I was delighted with the crowds,something different on the hills apart from grass, rocks and snow.It was also easy to get away from them as soon as we walked round this loch towards the empty Black Loch further on.Only two fishermen here and a massive black backed gull we took at first sight to be an osprey it was so big from a distance. 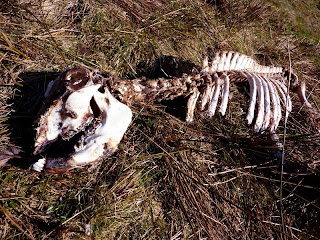 This was also a mystery.Looked far too big a head for a sheep but the tufts of hair still on it didn't look very deer like.Maybe some big pit bull cross bored to death with lying in a tent all day watching his master swally back the cargo under his umbrella.Or a Fifesire T Rex.
We were soon up on the ridge enjoying good views.Although not spectacular hills they were grassy and pleasant reminding us both of our own nearby Kilpatrick's in character. 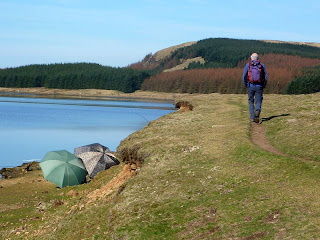 We soon had the area to ourselves again heading up Dumglow first then the second camel hump nearby with the cairn and hill fort remains and Alex`s trig which he quietly photographed with great care and attention.Then a little pat on its stone bum.He does this with them all.Pervert! He`s probably got a little book of pop up trigs that he thumbs through of an evening.Have fun with that thought. 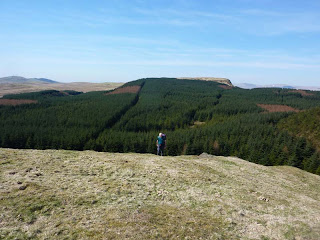 Next up was a thick forest lying between grassy summit groups but a stile and the obvious line cutting through it was followed to bring us out at the Dummiefarline area where we met a young couple and their kids out for an days adventure. 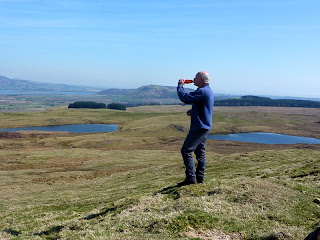 It was really warm now.The whole of Fife in a tee shirt apart from Alex who operates within narrow temperature limits as some of you may remember from last summer.Up to 19 degrees jacket stays on, a few degrees more he`s in a tee shirt,above that he doesn't go out at all as its too warm except on the highest Munro's. 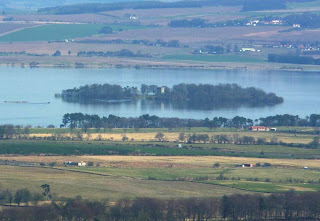 "Where do you want to go now then?" says he.
"I fancy Kinross and Loch Leven for a change."
"OK ,but only If I can do Cult Hill after that.
Off we went to the car park beside the loch.Alex having decided it was now too warm for walking stayed in the car reading the paper while I wandered round a bit of the Loch Leven heritage trail looking to see if it was bike friendly.It was (pick a quiet day though as it was packed solid today) and ran all the way round to Vane farm nature centre.If you didn't mind cycling on fairly busy roads for a stretch you could go right round the entire loch I noted happily for a future outing.The views would be really good all the way with the Lomonds and Benarty groups reminding me of the T in the park outdoor broadcast from near here. 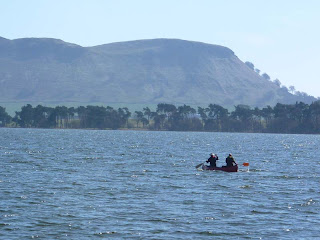 Two guys paddling were having fun with the increasingly choppy conditions out in the middle of the loch.Open canoes are much easier to capsize than a kayak.
Returned to Alex after a good meander across meadows alive with day trippers .He was buried in the sports pages.
"Right. Cult Hill then.Lets get away from this circus show." Off we went.It wasn't far. 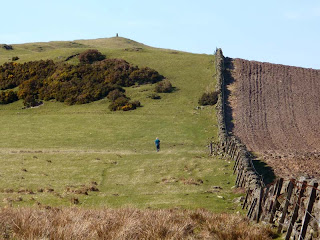 Heading towards this trig Alex found what he thought was a snake skin.Pah!He was more interested in taking a picture of his beloved white lump and we couldn't find it again on the way down.Had to settle for this picture of him instead,at it again.Another one for his wee pop up book collection of trigs. 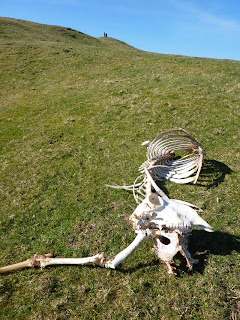 Looks a great part of the world guys.The closest me and the guys ever got was a bar known as the Log Cabin.I can't remember whether that was in Milnathort or Kinross.I remember the last bus back to Cupar was fairly late though,so you could get a bit past closing time at 10pm.Time for a snog if you'd pulled.
Jim

You seem to be have been a bit of a lad in your younger days Jim.Everytime we blog about Fife you comment on the girls there..!!
No trips for me this weekend ...I`ve knackered the disc in my back again.
Alex.

To be honest it wasn,t that special a range of hills.We have posted far more enjoyable and spectacular trips.But it was a smashing day in a new area.
I was out on sunday,on my own,Alex being kaput for now, walking what must be one of the most forgotten,isolated and abandoned beaches in central Scotland but thats not what I,m going to post next.That was not a fun beach.Very few people would wish to go there.This next beach is............Bob.