Inspired by the excellent Andamento`s weekly bike run Bob and I headed off to the heights of Renfrewshire.The original plan was to get the ferry from Wemyss Bay over to Rothesay, cycle down to Kilchattan ( Hello Margot..! ) and go for a walk around the St.Blanes Hill and Garroch Head area but a bit of an iffy forecast delayed that for the time being.
We geared up by the church in Kilbarchan and were soon on our way down to meet the Lochwinnoch cycle path under a blue sky for a change :) 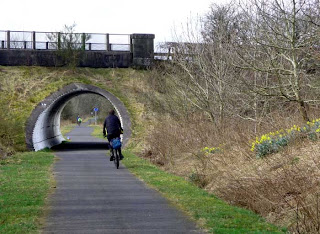 My bike is one of the original Marin Pine Mountain ones complete with knobbly tires for getting into the hills.I was glad to see that His Bobness,out of sympathy with me, had brought along his own off road bike rather than his mucho expensive Canondale road bike.We sped along for a few miles until we came to the old Temple,a folly,on the hilltop opposite Howwood.

Bob had to investigate... 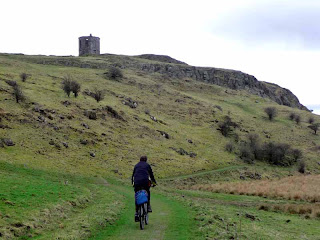 Quite a nice viewpoint it was too down the length of Loch Semple... 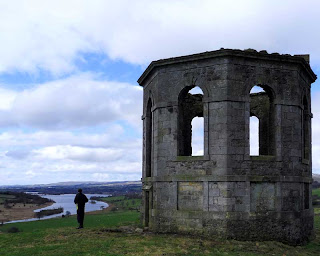 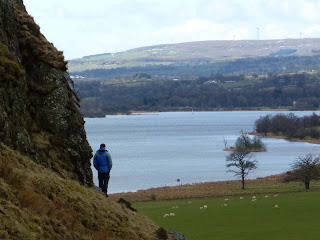 Another mile or so along the path Bob veered off to the right down a land rover track which he knew about and this led us shortly to the old ruins of the Castle Semple Collegiate church under the care of Ancient Scotland.
Maybe all churches should be reduced to this state I mused to myself. "Man will never be free until the last king is strangled with the entrails of the last priest." 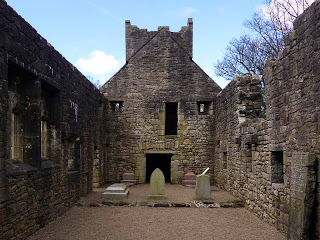 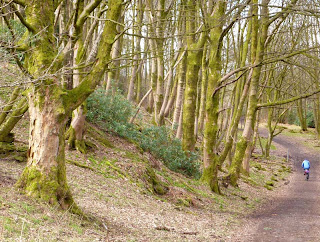 ........ to join up with the cycle path again on the shores of the loch and into Lochwinnoch itself.Time for lunch announced Bob despite the fact that he only had breakfast two hours ago.We don`t waste time sitting in bars or cafes on our days out,although I could be tempted by a decent cake shop, so it was a quick visit to the Spar shop and then on our way again.Years ago I never gave in to a hill when on my bike.I`d even go back up them again to show them who was the boss.Not nowadays though...pleasure is the name of the game.I knew there was a hill of sorts coming up and I knew I would be pushing the bike up if that proved easier.It did :o)


Another wee diversion to a viewpoint over Loch Semple where I availed myself of the bench situated there to go into recovery mode and have a quick fag and then it was back into the rolling countryside with the sun still shining.We were about three or four hundred feet above the valley floor now for the next few miles so could pedal along reasonably effortlessly while enjoying the views as there were very few cars on this stretch. 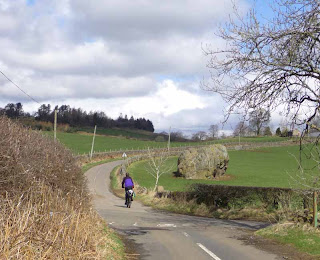 We played around here for half an hour taking pics and having a wee break.We were in no rush. 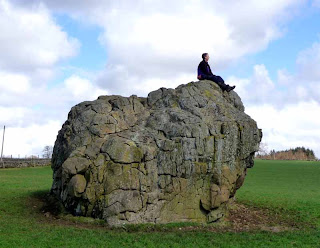 The Temple from the Clochodrick stone.... 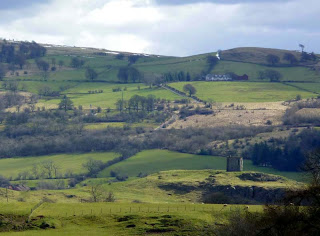 Half a mile up the hill we had another wee rest in the old quarry at the side of the road where I enjoyed the view over to Hill of Stake whilst Bob enjoyed another lunch followed by a packet of Mr.Kiplings lemon slices."We`ll run out of daylight at this rate if you have lunch every half an hour" I muttered.
With Bob`s stomach full we headed up hill for our first trig point of the day,Hill of Barnaigh.
It was only a few hundred feet but well protected by three different electric fences.Years ago we would vault over them but for some reason we find that difficult nowadays.These were not your average ones.The whole fence was live and doubly protected by another single live wire awkwardly placed on the other side and to top it all a crumbling wall also.Bit of overkill we thought for a few sheep.Maybe it`s meant to keep humans out :) 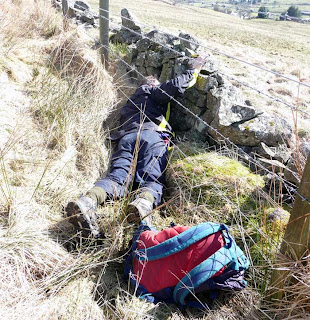 Nice wee hill with a big view over to the Luss Hills with the Arrochar hills just peeking over...... 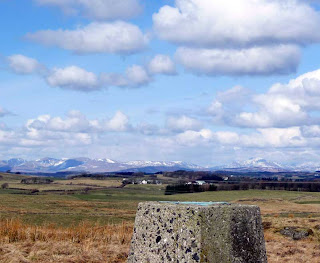 Back to the quarry and once more into the saddle and up the hill towards the B road from Lochwinnoch to Kilmacolm where,along the way and much to my shame,I was overtaken by a girl jogging. 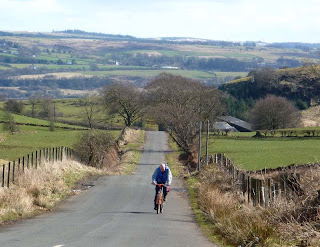 Well,Bob will say she was jogging,I`m saying she was a sprinter of some sort.Probably an Olympian :o)
Just to prove to Bob that I wasn`t always that slow here`s a wee clip of me returning from the remote Corbett of Stob an Aonaich Mhòir two years ago.Bear in mind that I had to cycle up this in the first place.!


We agreed to meet up at the car park at the Barnbrock junction and we went our separate ways.Plenty of curlews calling here and and a few buzzards to watch.Some fantastic views over to Ben Lomond and the Luss Hills also.Trust Bob to ruin a good picture... 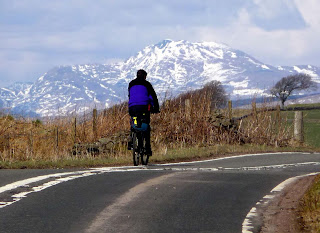 A right turn onto the minor road and past the campsite and another left turn took us to our next stop...the small wooded private loch at Barnbeth.It has a lost world feel to it.Only ourselves and a few herons to enjoy the peace and quiet.So tranquil in fact that Bob forgot to have lunch.. 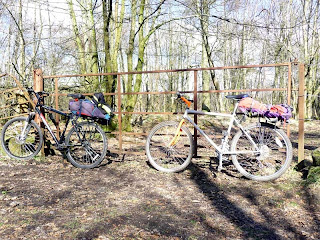 Down the road a bit past the impressive pile of Barnbeth House.Apparently a well known ex footballer with a enormous appetite for pie eating lives in the gatehouse :)

Pie eaters doves at the gatehouse... 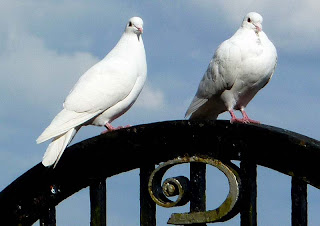 Another break shortly afterwards for me to bag the trig point on the hill in the middle of Ranfurly Castle golf course. 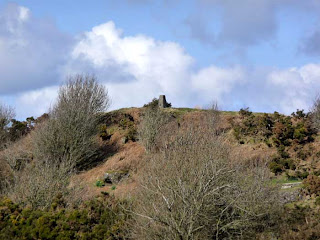 A couple of minutes later yet another halt beside the viewpoint indicator.Me to admire the mountain view to the north and west and Bob to have a spot of well earned lunch.A really well made indicator plaque on this one helped me ID a lot of the Cowal hills.

Social housing stock in Kilmacolm with the Luss Hills beyond... Being Easter Sunday and on the outskirts of Bridge of Weir there were quite a few Sunday dog walkers about now so we slowed down a bit on the fast downhill section from there onwards.
We now joined up with the Greenock-Paisley cycle path and whizzed along that until the turn off for Brookfield.I had fitted umpteen kitchens and renovated God knows how many sash windows and the like in these houses in years gone by and the nightmare of traversing Glasgow both ways to get to and from work still remains fresh in my mind.
Anyway,a more pleasant prospect lay ahead today, the trig point just up the road on Barr Hill on the outskirts of Kilbarchan :)
It`s a working quarry and we took a circuitous route to the left to avoid any security folk.Locked the bikes and a steep earthy scramble took us up to the summit and the trig pillar.I preferred the view to the north west.... 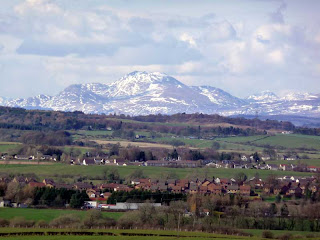 ...whilst Bob preferred the showstopping view to the south east so much that he once again forgot to have lunch... 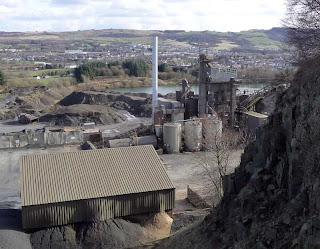 Cracking wildlfe reserve they have here only they probably don`t know it..! All sorts of birds in the scrub and trees.
Back down again to the bikes and a quick sprint ( relatively speaking ) through Kilbarchan and back to the car six hours after we left it.My first day on the bike for two years I think and thoroughly enjoyable it was too :) 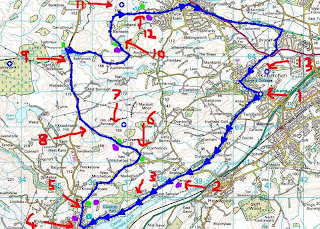 Oh,Umm! Your blog is much more inspirational than mine. I only ever potter about the same wee bit of Scotland whereas you guys get all over the place. And you're much more adventurous than me, a closed gate is sometimes enough to put me off exploring nevermind electric fences and quarry security! From looking at your route you've cycled right passed the front of our house - should have come in for some chocolate cake! Great photos - nice to see another person's view of a well known area. I've still not been up the Semple Temple despite cycling past it many a time, I'm saving it for this summer...

Excuse my ignorance but is "Man will never be free until the last king is strangled with the entrails of the last priest."
a Fester original? If not it's still pretty apt coming from you:-)
Love the pic of the Capn crawling under the leckie fence :-D

Anne,
You have the advantage of knowing that area like the back of your hand and through all the seasons.Bob an I on the other hand can`t even remember where we were last month which is why we started the blog.!
Have still to attend to the tablet recipe :o)

Vally,
I`m afraid I can`t claim credit for it much as I would like to.
I used it as my signature on US current affairs forums years ago just to wind the good ol` southern boys up.It worked a treat :o)

Love your blog post round Renfrewshire. Definitely going to see that Clochoderick Stone after seeing one of you perched atop it. Had a wee look see through the rest of the blog too and found plenty of places to add to my "let's go for a walk" list. Whether I can persuade Mr Jenn and the kids to actually go is another matter :-)

To Jen.Renfrewshire and the Firth of Clyde area must be up there in the top 100 list of places for beautiful views.Our folk tend to rush off to the costa,s or the med when its all right there on our own doorstep.People from abroad tend to value this region more than the average Scot.
Usual story if something,s sitting right beside you.
Plenty to do on Bute or a peddle or walk round Great Cumbrae.Even a nice day in winter is special.
I,m counting on you to drag your family towards a great and cheap day out.Tips...Take your own food and drink....tell any kids involved youve lost your purse only to find it back in the house:0) bob.