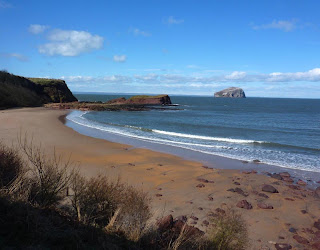 Down an unmarked lane,
Through a special gate,
Two gold coins supplies a key,
To an east coast treasure that awaits,
For those who solve this simple mystery. 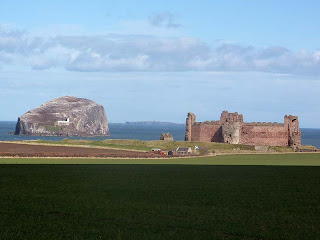 Since I discovered this beach a few years ago I`ve been back three times.Enough for a gallery of pictures taken on these occasions.On the first visit it was pretty wild.Ideal if you are into surf kayaking. 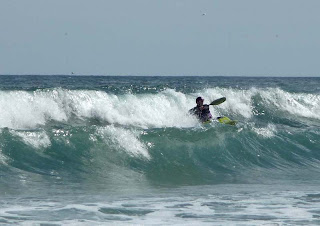 The East coast is famed for its big swells.This spring tide most of the wooden stairs down to Seacliff beach had been undermined but there are other easy ways down. 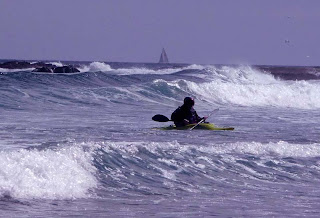 These guys looked as if they were having fun. 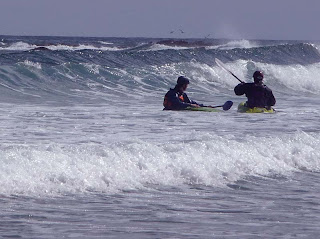 Apart from a lovely beach, at low tide you can walk along the base of the cliffs over rock slabs to the area under Tantallon Castle where a waterfall pours off the cliff.Be warned though this is committing as there is no way up from this bay except back via Seacliff.This has a tiny harbour carved out of the old red sandstone,but I`ve never seen it being used by any boats.This was taken on my last visit a few days ago. 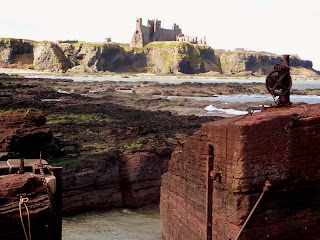 Although not well known outside the local area It can get popular on a fine summers day with family groups who enjoy the sandy beach and scrambling on the rocks. 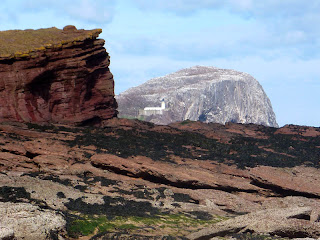 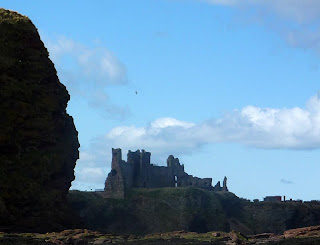 A couple of hours here is usually enough though then its off to climb the Glastonbury of North Berwick....North Berwick Law. 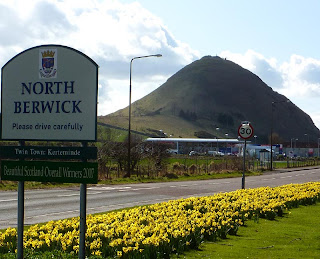 Got this just as the daffodils were coming out a few days after the harbour was devastated by huge waves that damaged a lot of boats along this coast.Nice today though. 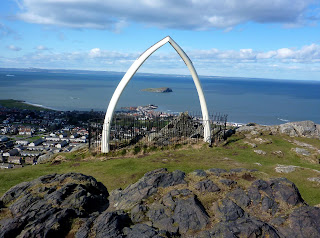 Yep.I had to go up to see the view from the summit and stroke those replica whale bones again.
Nearby is one of the strangest sculptures I`ve ever seen.Don't have a clue who this character is meant to be. 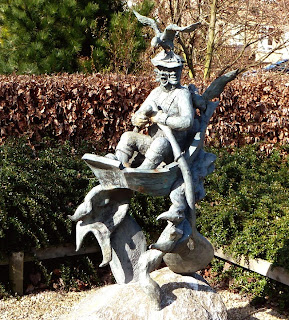 Any ideas who this three faced man is? 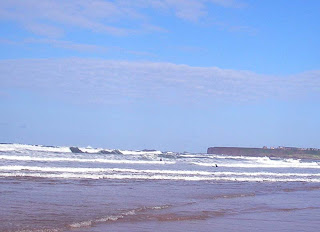 This is Belhaven Bay on a wild day.Unlike hemmed in Seacliff this is vast and open Ideal for sand cycling,sand kites, Fishing, horse riding and most other outdoor sports.My favorite lowland beach. 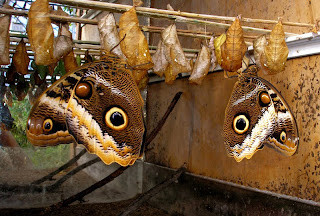 And on the way back you might even capture one of these opening wings for the first time.
Posted by blueskyscotland at 17:53

Looks interesting. A part of the country I've never visited properly. I quite fancy spending a weeks holiday round about North Berwick, maybe next year. This year we'll be off to Kirkcudbright.

Kirkcudbright,s a nice area as well,plenty to do down there. Five great beach/coastal walks I,ve really enjoyed for a day out in the central lowlands are Troon car park to Irvine walking along the beach then train back.Maidens car park to Culzean castle(beach then exploring the grounds.) Belhaven bay and the red sandstone cliff walk west from Dunbar Harbour car park.North Berwick west beaches cycling or walking to Yellowcraigs and Fidra.And Seacliff.All five are a great day out.Real five star stuff on a sunny day.
Bob.

That's a great view of the Bass Rock there Bob.That must be nearly as close as you can get to it on the mainland, is it ?
I'll have to keep an eye out for andamento on her bike this year.

Yep! you,ve guessed right Jim.Tantallon castle,s not worth the entrance money( being a ruin) but seacliff beach is well worth a visit at low tide.(For 2 quid)Turn sharp right at farm just before tantallon.
Hope to get out to the bass rock this summer.£22 to go round it in an outsized rowing boat from north berwick harbour.Last time I did it the famed east coast swell was 15 feet high.Everyone was sick halfway out.**** the gannets! was the general consensus of those aboard apart from me.I,m lucky I suppose. I never get sea sick.Bob.