Hi. I`ve been threatening Alex I`d put a few of our old photos up from the days when we had a lot more energy than we have now and the heady juice of youth flowed fast and endless into our little legs.We weren't always two old smelly duffers shuffling up wee pimples.There was a time when we strode the greater ranges like bloody Titans I`ll have you know........ .Ah for those long gone effortless days again. 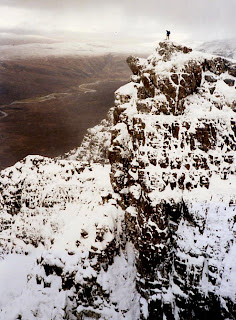 In those far off times even I loved the big mountains,probably because my job was a lot easier on me then.This was taken on a winter bagging trip over 20 years ago,around the time we first realised something funny was happening to the weather,long before global warming was getting a mention but if you went up the 3000 foot hills you noticed a marked difference in the snow. 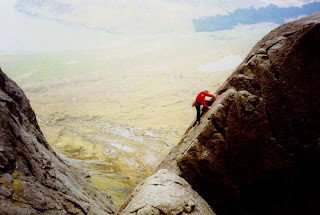 One of Alex going up the Cioch in search of the broadsword reputedly lost up here from the film Highlander. 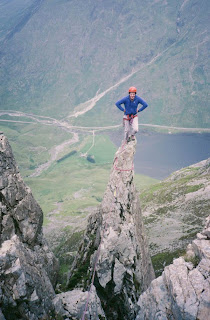 One of yer man Alex on Bidean in Glencoe.His head for heights was even better when he was younger. 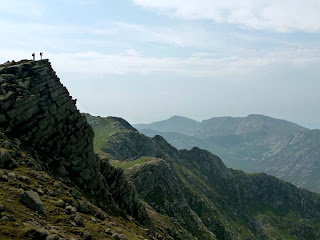 Arran has always been one of our clubs favorite islands.We used to go here every spring to camp then climb the peaks.One of my best remembered climbs was this one. 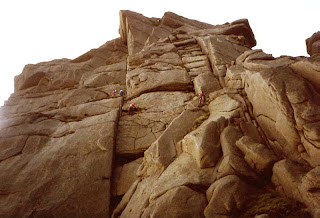 Full of dark chimneys,chockstones, awkward thrusty edges and big drops.The reason for the two grades is it has two different end pitches one of which goes up the right hand ramp line above the climbers to the chock stone exit at the very top.Never laughed so much on a climb. 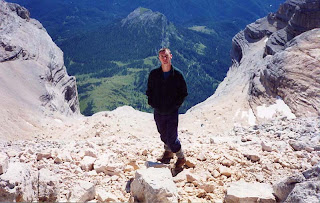 Never laughed much on this mountain.I was far too nervous. Probably the most incredible breathtaking hill I`ve ever been up.Monte Pelmo in the Italian Dolomites done at the end of the Alta Via One,the classic route through these mountains.Best mountain I`ve ever seen. The descent without a rope was somewhat worrying,we could see a herd of ant sized horses galloping on the meadows 4,000 feet below,more or less straight down from here.I don`t mind admitting it a wee bit of pee came out here. 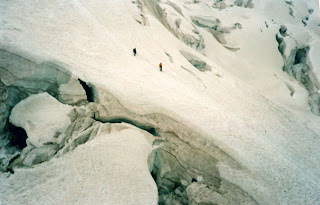 This was easier, the Bossons glacier on Mont Blanc reputedly one of the fastest in the Alps due to its steepness.Many big holes you could drop a double decker bus down.We were roped up for this. 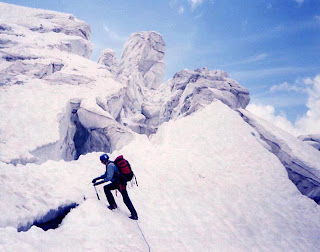 Amazing day out apart from the altitude,caused by our on stupidity racing up it maybe a bit too fast but we wanted to catch the weather window.15,800 feet I think( can`t be bothered looking it up, too busy with this one fingered typing epic.) 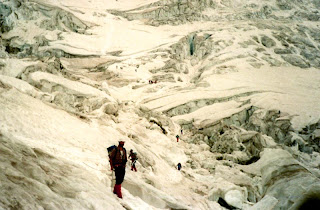 As you can see we weren`t alone.A popular route from the Grande Mullets hut.(big mules) We were just going to sleep here when the bell rang to get up. A crampon army dressed in the dark and head torched up in unison. 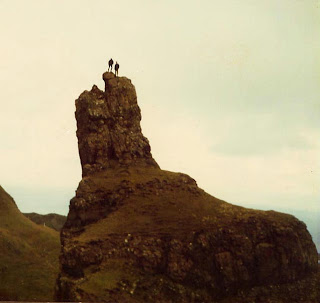 One of George and Alex in Skye.Although this is called the Prison from this angle I think it looks more like a hungry snapping turtle. 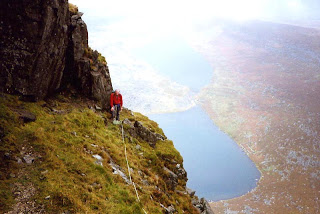 One from the days when we were bagging Classic Rock- (the book). Cracking route.Every September weekend we used to go a bagging down south all over England and twice here. 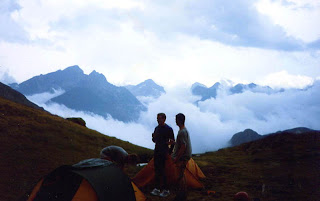 Like the clouds on this one .Soaking wet sleeping bags and tents waiting for the sun to dry them out- and us! 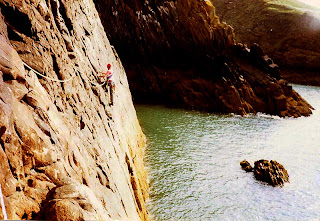 Alex on a lovely traverse then straight up the corner climb at a certain seacliffs in Galloway. 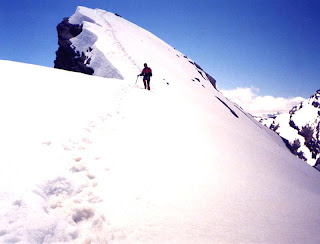 Had a great early holiday here in the Aosta valley of northern Italy.Filled with easy snow peaks and 10,000 foot Cobbler like hills.The highlight of the trip was climbing Gran Paradiso a truly beautiful hill.At 14,000 feet the highest mountain wholly within Italy. 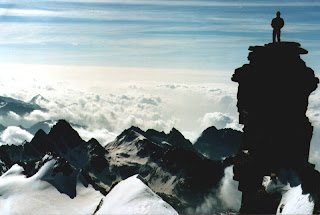 I must have been taking my bravery pills here! 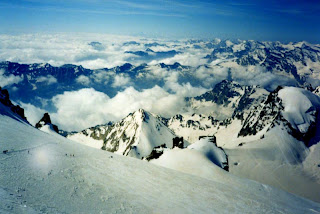 What a view from the summit. 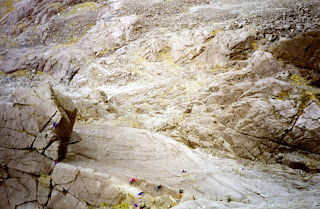 An unusual one from a belay on Integrity.A hard feeling route with tremendous exposure.Not often you can look down onto the Cioch. 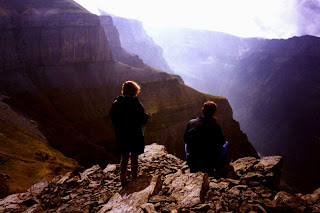 Ordessa Canyon.Magnificent place.We had to backpack down here next morning and spent a good while looking for a path down in the fading light.Fantastic backpacking along the walls of this and a lesser known canyon but the equal of the Grand Canyon as it is wilder and more unexpected.We had dramatic thunder and lightning storms here most afternoons into the evening.The rain was so hard a fine spray of mist came straight through the tent canvas onto your face and our eyes were zapped by sudden white bolts hitting the peaks nearby.Alpine thunderstorms are a blast. 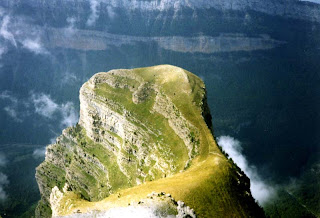 Mind bending exposure on this summit.There are climbs up the front face and basejumpers leap off.Now thats mad!!
Hope you enjoyed my wee gallery of what we got up to when we were young. 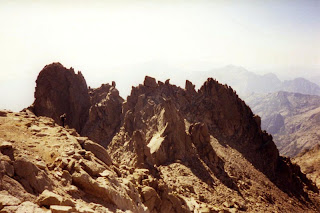 One of the highlights of the GR20 on Corsica. A fantastic backpacking two week trip. Very hot!! First time I`d seen prickly pears in Europe when I stood on one coming off the boat.
Posted by blueskyscotland at 23:13

I'm speechless! What FAB shots! And Fester on all those crags and pinnacles -- OHHHHHHHHH my!!!!!!!!!!!!! I can't quite imagine you two youthened, but it must have been so, once in the distant geological past.

Amazing, amazing photos. You're completely mad, of course. The one where he's teetering on the top of the pointy rock made me cringe with fear. It's great that you have all of these photos as reminders of your trips.

As you say Its as well we have got the photos.Lets face it at our age the mind tends to resemble a blank page anyway.Its only when I look at these I remember I used to have social life...... bob.

Hi Bob & Alex. Great blog site... your post has triggered lots of memories of trips 20 odd years ago, when we were all pretty fit!
(but didn't realise it then) As you say, without pics so much is forgotten. The Moray Club still have a core of folks out and about exploring Scotland, but we are a tad slow at blogging our adventures! Cheers.....Bill.

Hi Bill.I used to go out occasionally with the Moray Club many years ago.I remember a Bill and a Drew and a Liz and an Andy.Think I shared a good companion tent with an Eric as well one simmerdim or would have if I hadn,t climbed the hills at lochailort for the sunset that carried on most of the night.Good memories.I was in several clubs around that time but you were the only hill club that explored the outdoors with Kayaks as well.Alex came out a couple of times as well.Glad to hear you are still going strong if indeed it is your good self. Bob.

Amazing stuff Bob. Way out of my league...then I think to th epresent...Trig Points???

Oh how the mighty have fallen!!! (lol)

Wouldn't mind seeing more of this please! 'Cause I'm 100% certain it ain't something I'll being doing myself (lol)!

If I get the time Ken I,ll post another gallery of when Alex had hair and I had an active social life outside work.That kind of thing is way out of our league too now sadly.Another gallery might be soon seeing as how his nibs has done his back in.Got bags of great snaps just got to find them as they are tucked away somewhere I,ve probably forgotten.Got some great sailing and potholing photos too.Bob.
PS(I used to be James Bond,s Stunt double before I got ugly.)

I have seen most of these pics before, but still feel the need to comment that there are some cracking shots here!

Pity you guys still aren't up for stuff like that any more :-( Club misses you!