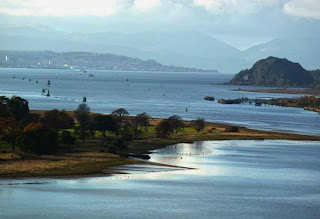 One of my own pet projects when I was restricted to shorter local walks was to push  the envelope further as to what I could do on the Glasgow/ Firth Of Clyde Maps.I,d already done most of the more obvious walks on both these maps Including most mountains and every loch and patch of blue water marked on them over the years.It was time for extreme measures now though.Time to think out the box.
In my own way I,m as much a bagger as Alex I  just  prefer sometimes  to make up my own lists of things I consider worthwhile trips to do.
I was attracted back to my new found Kingdom on the shallow bed of the Firth of Clyde with a mission.
Looking at the above photograph I wondered If it would be possible to walk out along the marker towers where the remains of an old raised causeway or service walkway can still been seen at low tide.The towers are  very obvious as they run right down the centre of the Firth  of Clyde on the very edge of the deep water channel in a line from Milton out towards Greenock. 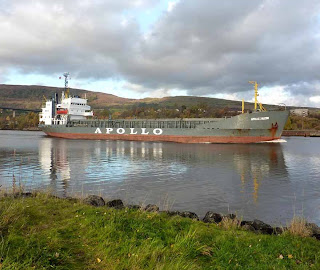 Ships as large as this one still use these markers to find the deeper entrance channel of the River Clyde allowing them to travel further  up river towards the city.Due to storm damage and  low level maintaince this barrier has a wild and forlorn look about it,as exposed , remote and battered as any mountain summit.With the tide rushing in it becomes an interesting and committing adventure. Game on.
I set off on my bike from my house on a sunny, fairly windy day.Along the canal then up over the Erskine
Bridge where the new suicide barriers are not as intrusive as I,d feared and if it keeps anyone else safe its worth losing the low, dive over railings I enjoyed cycling beside so much in the past. Very nanny state though...if life gets you down so much that you are really determined to kill yourself you will always find another way to do it. 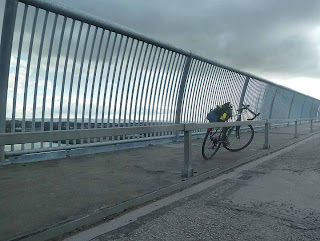 At Least you can still see out them.
New projects were all the rage in Erskine woods as well with  an elabrorate network of newly made paths  crisscrossing formally wild ground.I always find myself in two minds about these path networks.You could always walk here if you wanted before. It just didnt have any paths though  it was easy ground to travel across.These  purpose built paths are good fun for me,dog walkers, families with kids and mountain bikers.As long as they don,t become too popular and crowded or intrude too much on the very wildlife they are meant to be promoting which had this area to itself ,undisturbed, up til now.Its always a doubled edged sword these things. 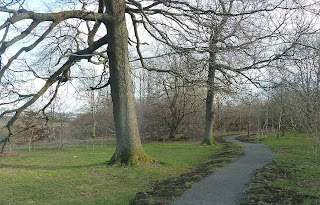 Must admit though it was great fun with a short climb, loops ,twisting drops and a nice gentle freewheel down to the beach at the end. 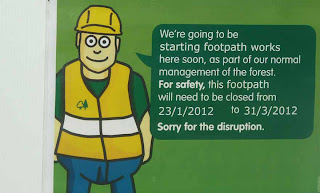 Going by the eyes on this sign the constuction workers seem to  really enjoy building these paths.Maybe they found something tasty growing nearby in the woods boys and girls! Sadly normal management of places like this nowadays does seem to  include a desire to open more areas of access to the public.Its a mini version of the national park debate going on just now at Loch Lomond and other places.First you encourage far more people into a place than before then you have the self created problem of imposing restrictions on them when not all behave themselfs.
OK. Lets see them make this walk safe then. 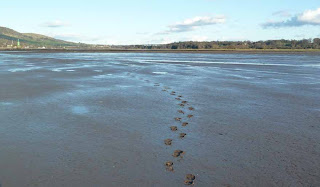 Off across the  sticky mud I tip toed.It was now less than an hour to maximum low tide.Leaning on the bike actually helped to spread my weight and I only sank in a few inches.Its an easy walk,just a few places where deeper mud or pools  of standing water bar progress but you can skirt around them.Id tried to do this walk before a few months ago but the tide was a lot higher then and travel across the salt marsh inland was grim,potholed  and messy.
This time the further out you walked across the mud the better conditions got underfoot.A leap of faith gains its own rewards. 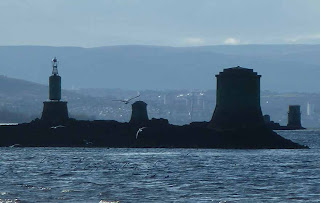 There was still too much water to reach the towers ahead streaching towards Greenock but the views were spectacular..Land and sky seem to really engulf  you out here. Its a strange experience. 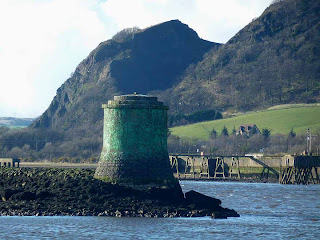 By skirting round I was able to reach the causeway and the first tower.These things are really big close up.
In the middle of the Firth of Clyde I left my bike under this tower and set off happily down the middle of the deep water channel.......I didnt know how far I,d get but thought I,d go for it anyway.My bike was just above high water mark on rocks that became an Island then. 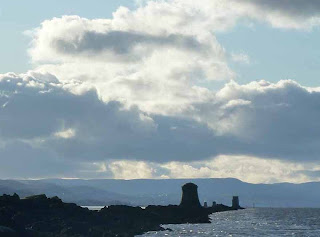 As the tide dropped further I travelled the barrier til I was able to jump onto the sands and run along beside underneath,which was  far easier.Four towers passed by then another.I,d  now run  and limped about 3 to 4 kilometres out into the Firth along side these markers.
It was a place you expected mermaids and strange sea creatures to hang around on.As remote in some ways as the remotest hebridean beach. 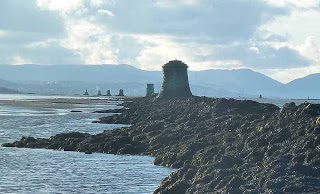 Certainly one of the wildest,most exiting and unusual places its been my privelege to explore I have to say. 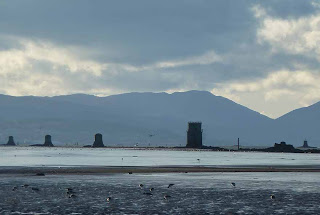 I could have walked around out here all evening but all too soon the tide showed signs of returning and this time it did come in with some pace.It was after six o clock and such a beautiful night it made your heart sing. Reluctantly I jogged  then limped back over the mud with the  constant sound of water lapping at my heels,just reaching my bike in time to save it from being on its very own version of desert island discs. 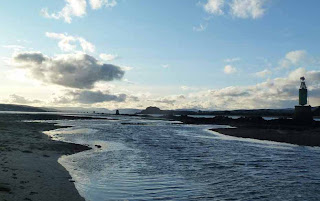 This sunken low point  on the dry side of the Deep water channel fills up in minutes so its better to be on the right side when it does unless you fancy a night alone up one of these towers in the middle of the Firth.
About as committing as a night on the upturned ,ever creaking deck of this nearby sugar boat I,d Imagine. 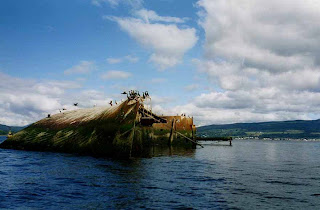 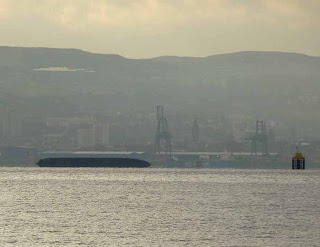 Wilderness can be ............where ever you find it I suppose.So here,s to many more close at home back yard adventures.
And I,ve not seen this one down in any walking book either........Funny that?
Posted by blueskyscotland at 17:56

Hi Paul.
You could do,some have a ladder up them.If anyone spotted you though it could be full scale coastguard alert and public humiliation in the papers time.
Best of Luck.It really is worth a visit though.Just got to watch out for the tide returning... other than that its easy.

Thanks for that never thought of being spotted for someone being stranded, may keep that one for the dark winter nights and my trusty sleeping bag for warmth.

You are expecting to sleep?You might not be able to lie down flat anywhere on the towers:).
Just a thought.

No not to sleep just warmth then again would I want to dirty me good ol' bag on gull and cormorant do doos, m,aybe just keep it to a quick in and out like what you did.

Amazing adventure! I would never have thought of this walk in a million years. How close did you get to the sugar boat, or was that picture taken from another boat?

When I saw the bike (and no rider) against the suicide rails I feared the worst! Lol

Highly innovative walk...substituting the usual boggy fare for mud flats and tidal pools. Makes for some great photos though. I take it the going is firm enough with no soft, suck you under, type of hazards?

Hi Robert.
The first sugar boat picture was taken on a memorable private boat trip from Port Glasgow with freinds exploring the Firth and little known objects off Greenock.The second photo was taken on another recent low tide mud walk between Helensburgh and Cardross.
In the last few months I,ve been busy working out several safe routes that go far out into the low tide Firth of Clyde basin.

Its one of the few areas on the local maps I haven,t walked and its such a vast area of empty landscape at low tide yet nobody seems to think of going out there.
Certainly never met anyone else daft enough to be out there on foot.

Hi Ken.
Nope.If you tread carefully the mud is only an inch deep.There are pockets of deeper mud around but these can be avoided just like you would walk round any obstruction .The rest is easy sand and gravel.The incoming tide is the only danger but you can outwalk this anywhere back to dry land.Obviously I wouldn,t put a walk in here if I thought it was going to be a danger for anyone else.Commonsense is the key.
There are far worse bogs up most hills.Meikle Bin in the Campsies springs to mind.

Rather you than me Bob!. Sounds really interesting but I avoid getting close to areas of water if I possibly can (unless there is the deck of a Calmac steamer between me and the water of course). Must be because I cant swim! Neil

Hi Bob, a guy once told me that Scottish magic mushrooms were far superior to those in England. That would account for the eyes.
That's an amazing walk. You've got the spirit of the old Scottish explorers like Muir Livingstone and Park.
You aught to get a book of rare walks together.