Island Of Rum Trip.Day One.

It was always our intention to go back to the Small Isles off the western seaboard of Scotland after successfully bagging Eigg And Canna in previous years.(also featured on this blog.)   June 2010 and August 2010 respectively.  Alex had never been to Rum, the largest of this island group. I'd been twice. Once on a glorious camping  trip over 25 years ago when myself , J.B and a keen Dutch guy who was part of an outdoor club we were in at that time walked the entire spine of the ridge,and stayed in the fabulous Guirdil Bothy sitting under the cliffs of Bloodstone Hill. It was a magical trip that still lives as a great if slightly hazy memory.(I think he was Dutch :o)
The second time about eight years later, again with a mountaineering club,was a grim visit that is also remembered for different reasons. It rained non stop for  the four days we were there. Some went up the now invisible,wind blown,cloud covered ,rain lashed ridge and came back with glum though very clean dripping faces. Myself and J.B went to a couple of bothies ...Harris and Dibidil... to pass the long grey days and still got soaked at low level.It was utterly miserable,damp and cold and most folk seemed happy it ended. 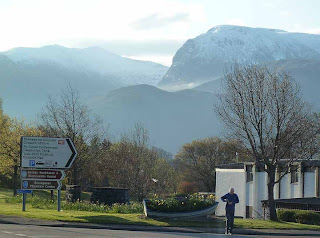 Sums up Scotland really,in particular ,the west coast.When you get it in good conditions it has some of the best scenery in the world.It bad conditions....well...you,ll be lucky to take any decent photographs up the mountains. When you can see  the top of Ben Nevis,the highest mountain in the UK however you know you might be onto a winner.This was taken from Corpach on the journey up.
Alex had spotted a weather window of a few days duration. He,d also phoned our man in Skye the day before, our old friend Alistair and asked him to look out his own weather window towards Rum.Nothing like local knowledge. No snow and sunny on the ridge was the answer.Hope you both sink on the boat you Jammy *********s.  Have a good time.
On the morning in question, Monday it was a 3.30 am  rise and Alex appeared  over at my door by 5:00am.
I groaned a half awake greeting and shoved my mountain bike and rucksack into his car.We were off. 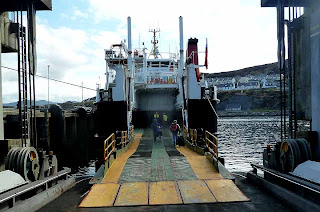 The reason for the early start was to catch the Mallaig ferry at 10:00am. After a casual uneventful drive up the west coast we arrived in this bustling seaport got the bikes and gear ready and boarded.
The usual amazing views opened up once out at sea. 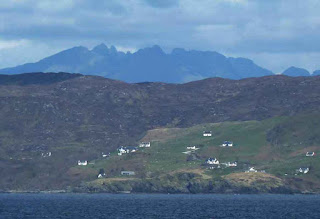 Looking across at the Island of Skye with the peaks of the Black Cuillin rising behind. 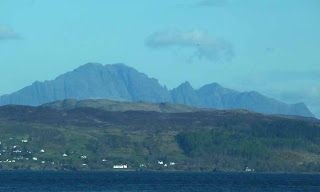 One of Alistair,s favourite Skye mountains judging by the number of times he,s climbed it. The mighty Bla Bheinn.Cant argue with that. It is above his house after all. 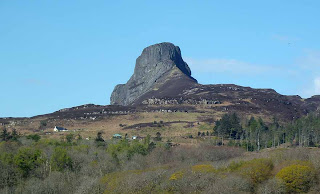 An Sgurr on the island of Eigg which we arrived at first. It's a great pelagic this as being an island lifeline the ferry visits another island in the group,which one depending on the days you visit. It was Eigg's turn this Monday and it looked as beautiful as ever in the sunshine. Loads of bird life on the water around the boat.Razorbills ,Manx Shearwater,Guillemots etc.... 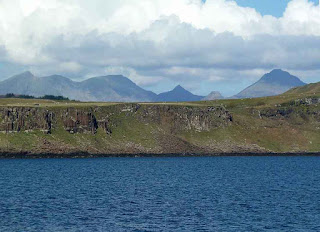 The Rum ridge came next, spotted over this low shoulder on Eigg. It was a smooth crossing, just a light breeze and fairly warm for April. 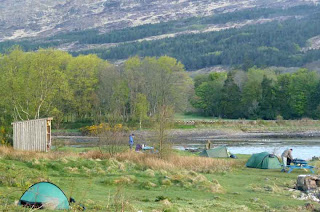 This is the campsite on Rum. A great spot on the edge of  Loch Scresort. Considering it was early in the season and mid week  the island was fairly busy. We,d been the only campers on both Eigg and Canna, here there were already large groups staying at the youth hostel,village accommodation,bunkhouses and adjacent bothies. Obviously Rum was now firmly down in many minds as the place to visit. It has been featured on television several times in the last couple of years.The red deer rut on Autumnwatch at Kilmory, Restoration(a feature on Kinloch castle) and a few others. Pete Edwards(Writes of Way blog linked to here) also has a timely new guide book out on Rum ,the other Small Isles  plus Coll And Tiree which the girl in the next tent already knew about.It's a small world as we bumped into Pete recently in Glasgow.
I must admit with all the new signposts, facilities, range of accents and groups of tourists milling about the immediate area  the village felt more English Lake district than Scottish west coast Island.It no longer seemed the remote outpost from 25 years ago. Obviously it has been discovered big time. 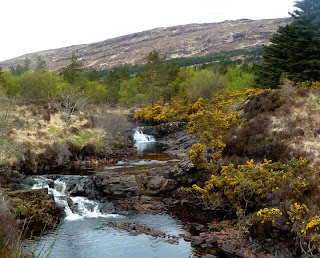 As it was too late in the day to do the full ridge Alex suggested the lower hill above the village. Mullach Mor. It was obviously down on one of his lists somewhere. A Marilyn ,Shelia,Yvette,or Senga.Take your pick.I forget which one
At under a thousand feet of ascent I was keen.It looked easy.
This proved to be a misconception.If there was any path up it we didn't find it.The terrain underfoot was unbelievable, every second step a leg swallowing hole of scrotum damaging depth hidden under a thick blanket of tussock,heather or long grass.On the plus side little lizards seemed to love this hill,dozens of them scampering away at our laboured approach.Maybe they didn't get many visitors up here. We soldiered on upwards,cursing ,slipping and falling.The ground under this vegetation seemed to be either made of marbles or missing altogether.Crawling on hands and knees  up the steeper sections proved to be the best way to move ahead sometimes without major damage. 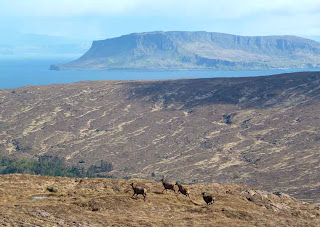 How the deer could run across this hillside without mishap is a mystery.This is higher up however, out of the thigh high flounder zone of the lower slopes.
The summit was more to my tastes.Minor rock escarpments at last giving us a solid platform to walk along and extensive views over to Skye,The Main Cuillin Ridge and a fair chunk of the west coast mainland. 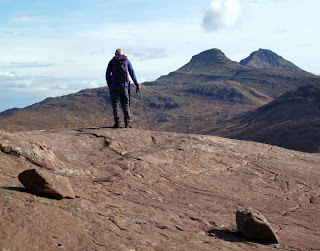 Now this was more like it.Some sort of major Nato war games seemed to be happening out to sea with destroyers,ships,helicopters and other assorted battleship grey craft glimpsed over the next few days. 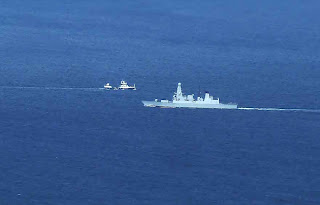 Far from disturbing the outlook it just gave us something extra to look at. I,m sure this ship was built  on the Clyde not far from  me at Scotstoun. Its sister ship with its distinctive ball tower is still there getting the finishing touches ready to go to sea. It's higher than the four story tenement buildings around it.
Going down proved easier and we soon reached level ground again where we bumped into these guys. 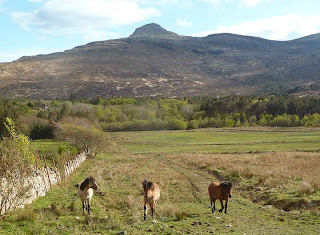 The Rum ponies.They look cute here but when they came up to the gate they proceeded to bite the shit out of each other in front of us then one chewed the do not feed the horses sign, of which there were two more heavily chewed and spat out below the gate.We patted them warily,watching those cute playful teeth didn't nip fingers and spit them out to join the signs below the gate.Maybe they,d just come down from Mullach Mor too.That would make even a saint mean as hell. 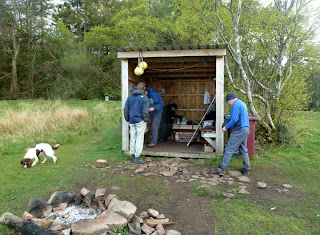 A good first day. Evening was spent around this little shelter,where you could cook ,chat and hang out. These two guys  and dog were our fellow campers as was the hardy lady behind who preferred to bivi in here despite a cold wind getting up after sunset.There was no midge around thankfully as I remember them being very bad here in the past. I,d packed a large amount of midge cream just in case.
A good introduction to Rum and even better would follow.......

Good write up Bob, the early start from Glasgow always knocks you out. I remember falling asleep in the warm sun for a few hours on the summit of Askival(thankfully I had a hat on) Looking forward to your next instalment (no pressure!)
Bill

Good God That Was fast Bill. I,m still Correcting spelling mistakes this end.Cheers for dropping in.

Great pictures Bob, and I guess you're back to fitness.
I wonder if the battleships were part of the Joint Warrior exercise that just finished. There was plenty of activity down this way.

Cheers Jim.Almost.
Probably was that.Seems to have been spread over a wide area.

yes, jammy sums it up nicely!