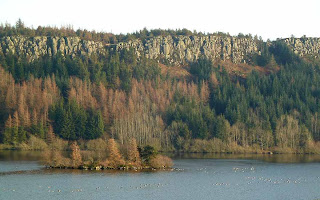 Although I,ve cycled and driven past the  lowly  Lewis hill(266 metres) many times in the past I,ve never been up it until now.To be honest it looked a bit scrappy from below and walking through pine forests is not a big turn on for me these days.I prefer decidious woodland walks normally.How wrong can you be.
It was only when I looked at the excellent photos on a fellow bloggers site,(Inflatable boat journeys  from around Scotland) that I realised its potential for views and outlook were better than I thought so thanks to Donny for a new walking route.
A bright Sunday dawned a couple of weeks ago so I thought it was time to have a look myself.
This hill sits to the west of Stirling on the Campsie uplands,a high plateau of rough grassland and rolling hills,perfect for a cycling tour over the minor roads if you don't mind a few steep hill climbs. 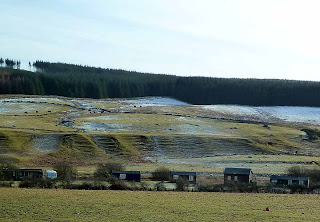 Its a beautiful but empty quarter,just a few Isolated  farms and a small  cluster of wooden  huts around the Carron Bridge hotel.Although a nice sunny day these minor back roads had several inches of ice on them in places where seepage water  had crossed the tarmac.One stretch under trees lasted 30 metres and came as a surprise as it was at a bend and then down a steep  hidden dip.Braking proved somewhat interesting at this point.The Carron valley reservoir itself was covered in ice as were most of the other dams and lochs up here.At a guess It was about minus 4 or 5 degrees out the sun.I was very  glad I was not on a bike this time.The heater went up a notch as I climbed out the valley towards the crags.. 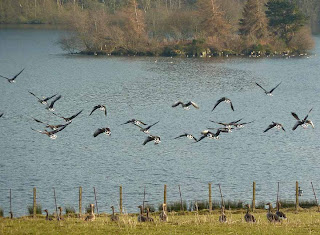 This was lucky  for me as North Third Reservoir below the crags seemed to be the only ice free body of water in the area.Hundreds of Greylag geese had noticed this fact as well with large squadrons arriving and settling around the islands after feeding in the feilds. 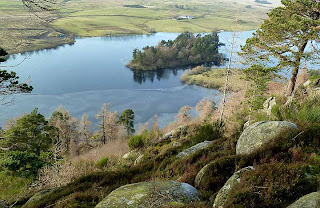 The view from the summit cliffs is delightful  and a faint path runs right along the top of this escarpment.Its an easy walk but very worthwhile.I knew there were various climbing routes on these crags,some on the Red Tower  near the dam reaching  20 odd metres in height but most of the climbs here are  awkward jamming cracks, in the main going straight up.Guide book descrptions like " a hard start....trying middle section... and .....bold, exiting  moves over a bulge to finish" tended to put me off  here in my climbing days.I seem to remember there were a few climbs with rather rude titles no doubt on account of the amount of flesh lost  off limbs on the way up.Jamming your fingers,hands, knees and toes into  thin cracklines then hanging  the full weight of your  body off these poor  battered extremities as you shuffle upwards was never my idea of a fun day out.Probably why I,ve avoided it for years.
The plan was to park on the highest point of the minor road near the crags where there are a couple of laybys then walk north along the top of the crags,returning via the dam and Greathill. (a farm)
Views north showed a landscape of high grassland and moor.Its not a place to walk or cycle in bad weather unless you like it grim.Some do I believe but I,m not one of them. 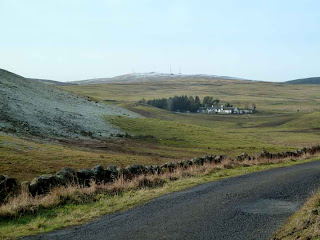 Greylags are very vocal birds and kept up a noisy grumble throughout the walk although I was nowhere near them for most of it. 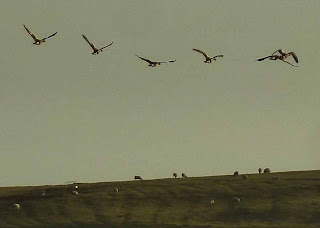 Geese flying across the road on the way back.It was wall to wall wings as more arrived to spend the afternoon and evening out on the water. 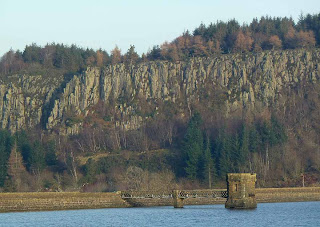 View over the dam which can be walked across. Its not a long walk and only takes a couple of hours but I,d definitely recommend it on a nice day.Short enough to fit into a morning or afternoon and not too far from Glasgow, Edinburgh or Stirling. 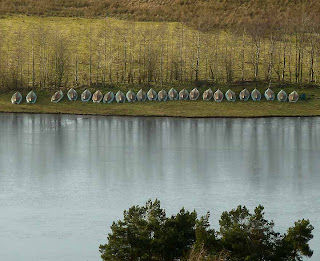 Its also a popular fishing spot in season going by the number of boats lined up here ready for the spring. 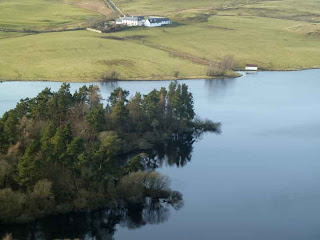 On the way back I went via the Carman road for the usual icy sunset over Inverclyde.A short but highly enjoyable outing. 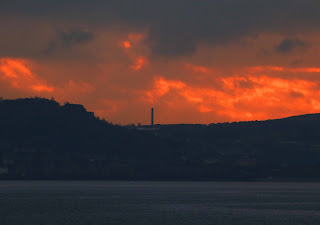 This is indeed a great wee hill and the area around it is lovely. It is only about 5 minutes drive from my house but I tend to drive 15/20 minutes and go up Dumyat. However, about 10 days ago Donny of "Inflatable Boat Journeys...." kindly picked me up to go with him and his dog Holly for a wander here. It was a beautiful spring morning and I couldn't believe how lovely it was.
Enjoyed your report.

Had a wee daunder up there a few years ago (http://loveofscotland.blogspot.co.uk/2008/10/north-third.html). A great wee spot, would liked to have continued the walk further on towards Stirling direction!