There are three great ridge walks in Scotland on islands, arguably the three best ridge walks anywhere in the British Isles for their length and complexity. Knife edged Skye is first of course, then I,d pick Arran for its miles of sweeping granite and  rocky tors, plus ease of access, then Rum a very close third. 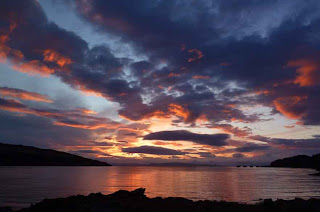 As I,d retired to bed early, completely knackered, I was up around 5.00am to catch the sun making its first appearance.
By the time I,d had my breakfast (a tin of cold beans and sausage on a buttered roll...class act eh?) the sun was just starting to burst in the door of the tent. 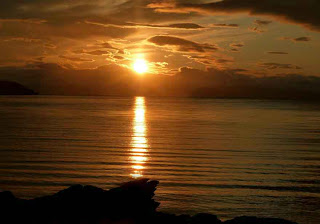 It doesn't get much better than this unless a supermodel/ top actress/call girl escort/ pony or rent boy is sharing the tent with you. Tick which you prefer.Maybe all at once if it's a large tent and you are a politician or have mountains of cash to splash around.
I was happy with a bottle of coke and a lone heron in the distance.Alex surfaced at 6:00am and was ready to go at 7:00am after three cups of coffee and several of those little white sticks that he seems to prefer to food.Actually that's how most supermodels or actresses also start their day now I think of it, though he,s getting nowhere near my tent. 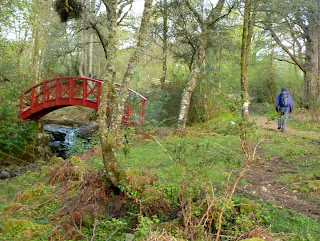 Lush surroundings in the woodland around the castle grounds soon gave way to more spartan upper levels as the bare ridge came into sight,summits still covered in early morning cloud.We were hopeful it would burn off and were in  no hurry to run up into it. Easy pace was preferred. 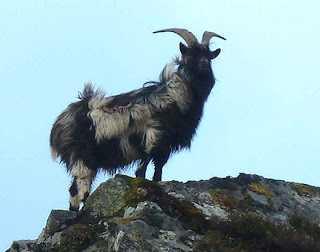 Met a few wild goats on the way up the path,this one high on top of a large boulder admiring the view.I,m sure that most animals get the same basic pleasures as us at times and spring makes them frisky and want to do new things. Maybe it was looking across at other mountainsides wondering what they were like. 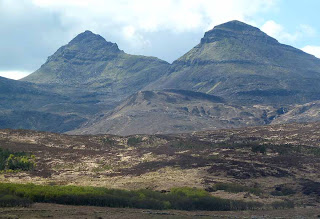 Soon the first two mountains on the ridge came into view. Hallival and Askival. All the peaks of the ridge have distinctive pyramid shapes to them. I,d forgotten how spectacular they were close up.Or how exposed. 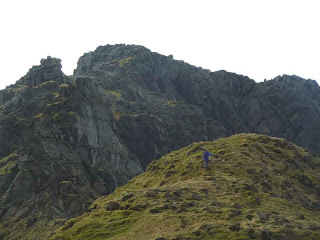 Askival in particular looked huge and knife edged.There is a Diff grade scramble up the Askival Pinnacle seen here. Twenty five years ago myself and J.B climbed this straight and it seemed easy then, just one or two exposed moves high up. Today, still damp, vegetation dripping wet and cold from the overnight clouds we bypassed it on the left for an easy if strenuous scramble to the summit. I still can't kneel down on my knees properly on a carpet after my road accident without pain but it's amazing how a large vertical drop below you makes pain in the knees seem irrelevant. I kneed and elbowed my way up various awkward rock steps like a champion elephant seal on a bouldery beach. We topped out in bright sunshine then met a young Polish guy searching for the way down. He didn't fancy the Pinnacle either. (we found out later a small day rucksack on his back was his entire kit for travelling. Best example I've seen yet for minimalism and ultra lightweight gear. Hat's off to him for preparation. 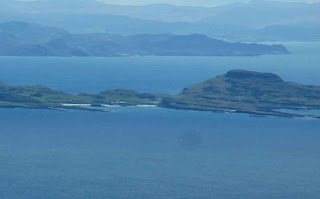 The Small Isle of Muck could be seen in the distance with its sandy beaches and hill, Beinn Airein, which we have still to do. In spite of the busy village area most visitors seemed happy pottering around at lower levels today. Apart from the two guys with the dog and then a second pair of folk seen much later the ridge was empty. 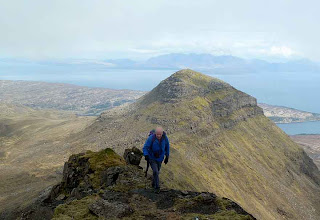 I was keeping up with Alex on the uphill push but was miles behind on the descent off each as I was having to favour my right leg and knee at each step downwards and couldn't bend my legs properly, sitting down to handle any drops in the path.

Here,s a view of some of the other peaks. Ainshval and Trollabhal. I,m sure this used to be called Trollval.....Mind you Rum was Rhum back then on most maps. 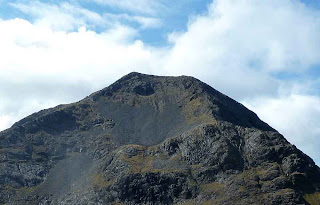 The soaring peak of Ainshval came next looking very steep and Intimidating.There is actually a reasonable if faint path  up this, zig zagging across the right hand edge. As I,d climbed it before I bailed out of this a quarter of the way up, my excuse being Alex had left his camera behind at the last rest stop so I offered to go back to get it. Truth be told after my long lay off I was feeling the pace and the painkillers had still to kick in properly.
I gave him my back up camera and left him in good company...two fellow Corbett baggers, one of which put us to shame.He was older than us by the looks of him and had two plastic hip replacements.He gave me a cheery wave and together the three of them weaved upwards over steep scree. 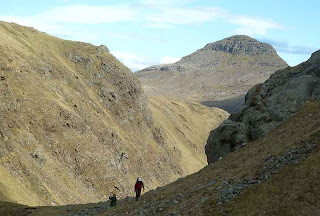 This is one of them a quarter way up Ainshval. Hallival is in the distance.Most of the mountains of Rum have Norse names as they were islands well known to Viking raiders from the north. Trollabhal seems to have been made more Gaelic on my modern map for some reason. It was named after the Manx Shearwater who nest in old rabbit or puffin burrows over several summits here. 60,000 pairs or thereabouts each season.A bird of the open ocean ranging far out at sea they only land here to breed.They catch fish and sand eels on the surface or underwater but this has left them with a long streamlined body and small set back legs. Highly adapted to a life at sea they only land  here at night. During the day predatory gulls and skuas would get them.They find it easier to slide across the grass to the burrows than walk upright. It was these night time gurgling's, whispers and cackles below brave but superstitious feet that convinced the Viking,s Trolls inhabited these lonely mountains hence the name. 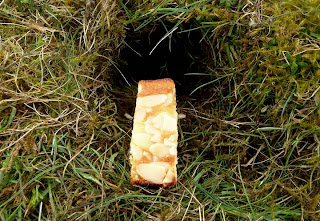 Even during the day we heard strange sounds coming from below ground. I tried a tasty almond slice, Mr Kipling's finest but no show from the chick.("What,s this crap?"  It probably thought below. "Where,s my ********  regurgitated  juicy fish!" I soon found Alex's camera so I went round and climbed Trollabhal next. It's one of the lower summits on the ridge but a belter. I couldn't really remember why it was so good but just knew it was not to be missed. 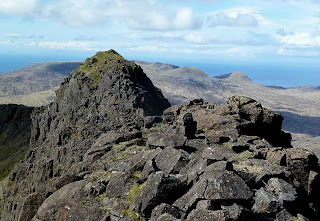 I remembered near the top.It may not be the highest  peak around but it's got an exposed and very airy ridge scramble to reach the summit. Back in the day I used to walk across stuff like this with something approaching style. Now a few years away from sixty it was all hands ,knees, bum and silent prayers to be good in future. I m definitely losing my head for heights as the years pass. Having only one trustworthy leg at present doesn't help. 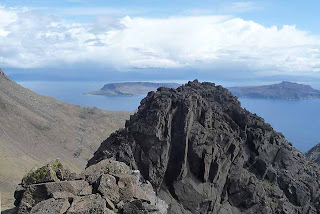 One Alex took looking the other way from the summit,with my borrowed spare camera. 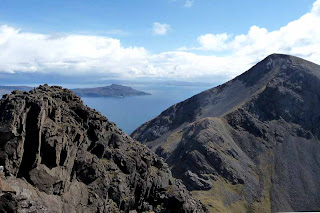 The view across to Ainshval which he'd just climbed. Few folk go on to Sgurr Nan Gillean behind this or climb nearby Ruinsival unless they depart from Harris bothy. Another outlier usually missed is Beinn Nan Stac which has a deep cleft  almost cutting its summit in half. It lies above Dibidil bothy. 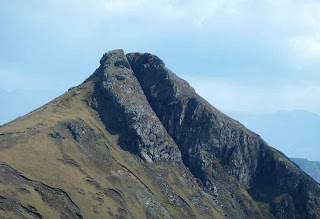 Even without these additions it was an eleven hour day and 5000 feet of ascent for Alex, slightly less for myself. Just as well I missed out Ainshval as I was cream crackered on the long walk back to the tents. 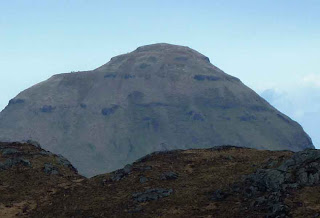 A final zoomed shot of Fionchra with deer feeding below the summit. Heat haze affecting the quality of the photograph. A long hard day but great weather.
Posted by blueskyscotland at 17:44

Considering you still have a dodgy leg Bob, you're reaching great heights.Look's like it was a great 'West Highland Adventure'.
The wee hill I'm climbing tomorrow's like a pimple to those in this post.
Brilliant scenery.

Hi Jim.
Its a great Island and we were lucky with the weather thanks to keeping an eye on the forecast.
I watch it every morning and evening even if I,m not going anywhere.
The sun shines somewhere in Scotland almost every day.
Sometimes it too far away to reach sometimes its close but its there.

Oohh, it looks like we NEED another trip to Rum. It's been years since we've been there. I was looking at photos of Eigg two days ago and wondering about returning there, but I think I'll put Rum higher on the 'must go' list.

Forgot to add, I hope I get to wake up to a view like your sunrise shot.

[If I do, I'll make you really jealous, because I WILL have my supermodel (hubby) with me ;-) ]

That sounds a brilliant trip Bob. The west coast is certainly getting some great weather just now, not before time. Not in the same league but I was up Ben Hiant the other day.....marvellous views. Rum looks spectacular from there. Not sure that I could manage the ridge though. Neil

Hi Neil.
Ben Hiant is a great hill too with panoramic views over the western seaboard.Enjoyed my solstice camp on top last year.
Best ever mountain top solstice has to be on Rois bheinn though as I had the full simmerdim effect lingering for hours and a huge orange ball sinking slowly into the sea.

Hi Sheila.I forgot what a fantastic Island Rum was but getting nice weather makes all the difference.Hope you are lucky when you go.Still the most inspired,amazing book I,ve read in the last 3 years?Wicked by Gregory Maguire.